Time-varying artifacts in long exposure: is it the sensor?

I have just made my first attempt to photograph the International Space Station, and I clearly need to improve my technique. Here are the details:

With AV priority, this gave:

During the two-second exposure, the ISS obviously moved along quite a bit, but I was surprised that the blurred image was not uniform, but intermittent, as if something had been flashing at around 10-15 hertz. 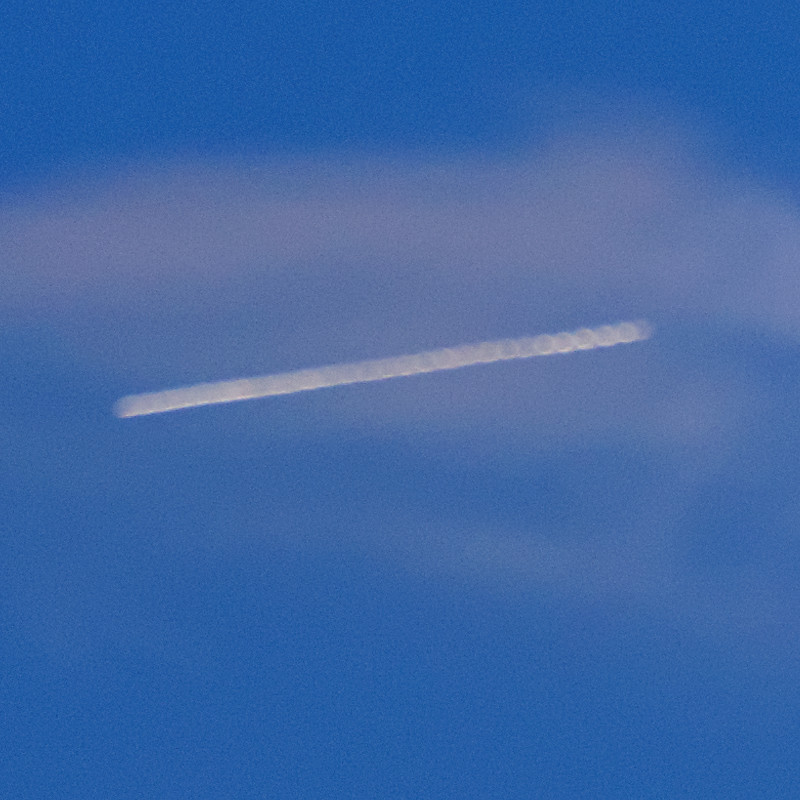 Clearly this is the sort o photo I wouldn't hope to take again, but I'm curious; can anyone tell me what might be going on here? Is this some kind of cyclic process in the sensor or processor?

BTW, I'm reasonably certain this is the ISS and not something else, as it appeared at the right time, positioned correctly relative to the moon, and with the trajectory I expected.

A note on focus:

In his comment, @MichaelClark rightly draws attention to my focussing -- another aspect that left a lot to be desired.

The photo was taken with manual focus, and with image stabilisation disabled. As I knew the ISS would be moving fast, I tried to pre-establish focus by using the Moon. The ISS was about 1350km from me, and I assumed (perhaps incorrectly?) the Moon's infinity to be a good enough approximation.

The cause is almost certainly with the object you photographed.

If it were with your sensor, then why isn't there some kinds of distortion of the clouds or any other aspect of the frame? You might reason that the sensor behaving erratically or intermittently might produce an effect like this, only visible on moving objects, but then why should it co-incidentally produce a circle each time, brighter along the bottom edge? That looks to me like light being reflected off the object and the object is spinning consistently, or a (bright) light is coming on and off (or the object is being shaded, then lit, by something moving in and out of the way between the light source and the object), highlighting the object periodically.

Unfortunately, most online images of ISS trails are wide angle landscape shots. Kudos for capturing it at 200mm! They also seem more brightly exposed, rendering the ISS a solid white line. The nearest I could find for comparison is at link below. You can click on portions of the image to load high resolution snippets. It shows periodicity in the colouration at edges of the trail but I am not certain that reflects the same thing you've documented.

Try to take a picture with the same conditions in a complete dark room. The only reason for a non-uniform shot should be the sensor-sensitivity. If you get a noisy image try reducing the ISO, the lower the ISO the less noise you should get in an image. In addition try, cleaning the lens itself. Some dust on the lens could cause additional noise..

Not the answer you're looking for? Browse other questions tagged long-exposure artifacts or ask your own question.