Ok, I am an amateur photographer and I will start being the marching band photographer for my high school. I will get a Canon 7d soon, but I'm told it has poor low-light capabilities, which is a problem, because the band always plays at night on the football field under stadium lights. I have been looking for the right lens, and I happened across the Canon 28-105mm L series lens, which is very highly rated, so I'm leaning towards that one. Just to be sure, I asked a friend who is a professional photographer, and he recommended getting a Sigma 70-200 lens instead. I really need a second opinion here!

I've been shooting high school bands for near a decade now. Your question as asked is hard to answer because there are too many variables you have left out.

Without answers to these types of questions it is hard to give a good answer on what type of lens(es) you will need. However I will share what has worked for me at various stages in my experience. 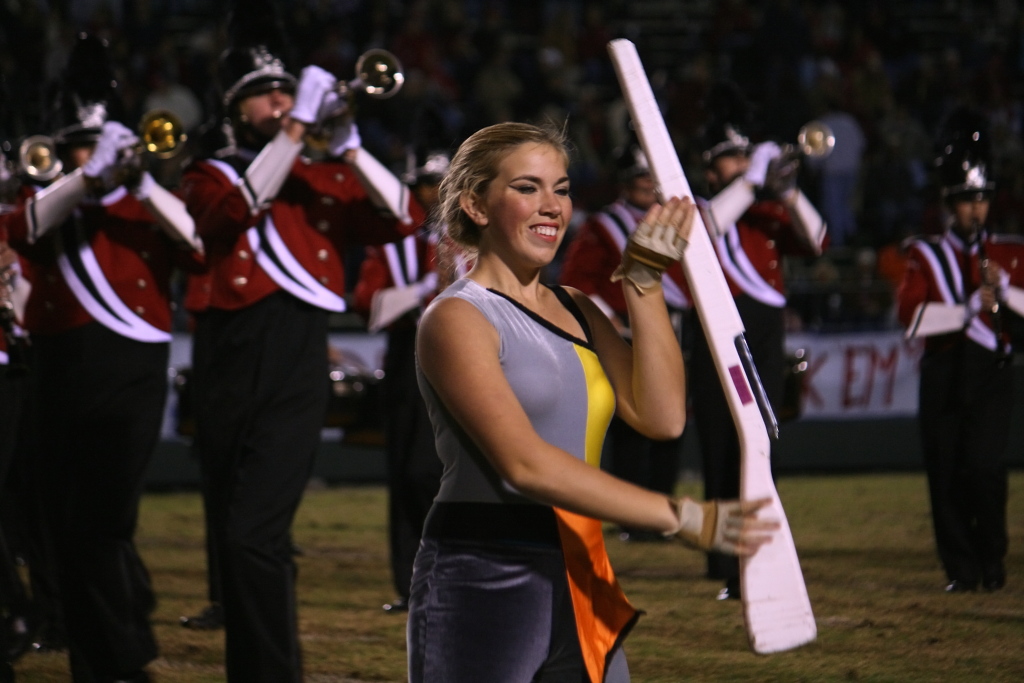 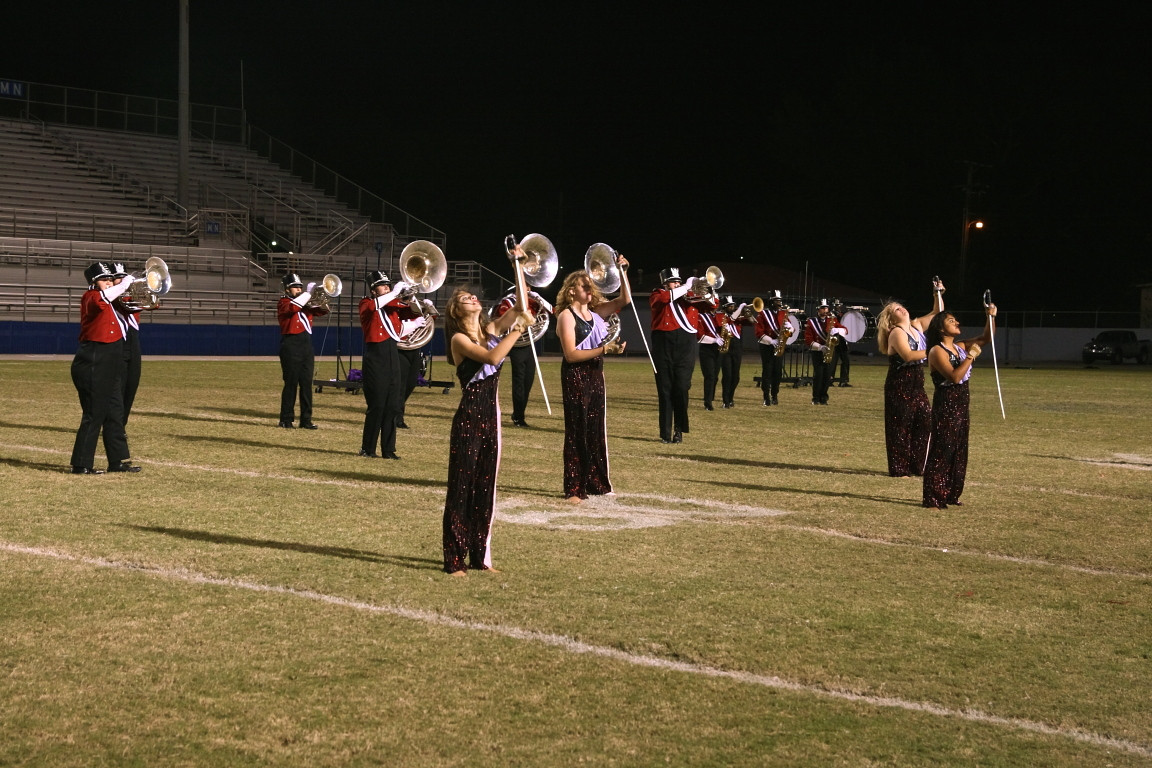 Being (self) limited to ISO 800 forced me to use slower shutter speeds than I would have liked. I had to take a lot of pictures and work on timing them perfectly to get a few that were timed so that the motion blur was minimized.

By the third season I had picked up a Canon 50D and an EF 70-200mm f/2.8 L IS II. It was like walking out of the darkness and into the light! The camera handled much faster allowing me to catch more shots I would have previously missed and the fast, high quality telephoto allowed me to shoot at faster shutter speeds.

If you are going to limit yourself to only one lens, a 70-200mm f/2.8 is probably the one you want. You can shoot (from the sideline) closeups of students near your shooting position, full body shots of students out to about the nearest hash mark, and also (from the stands) wider shots of groups of students such as a particular section. Get the best one you can afford. IS is nice, but not essential, especially if you practice good camera stabilization techniques and/or shoot from a monopod. If the choice is between a 70-200 f/4 IS and a 70-200 f/2.8 (no IS), go with the faster aperture! I've gotten a lot of nice shots with the 50D (and later the 7D and 5DIII) plus the EF 70-200mm f/2.8 L IS II! 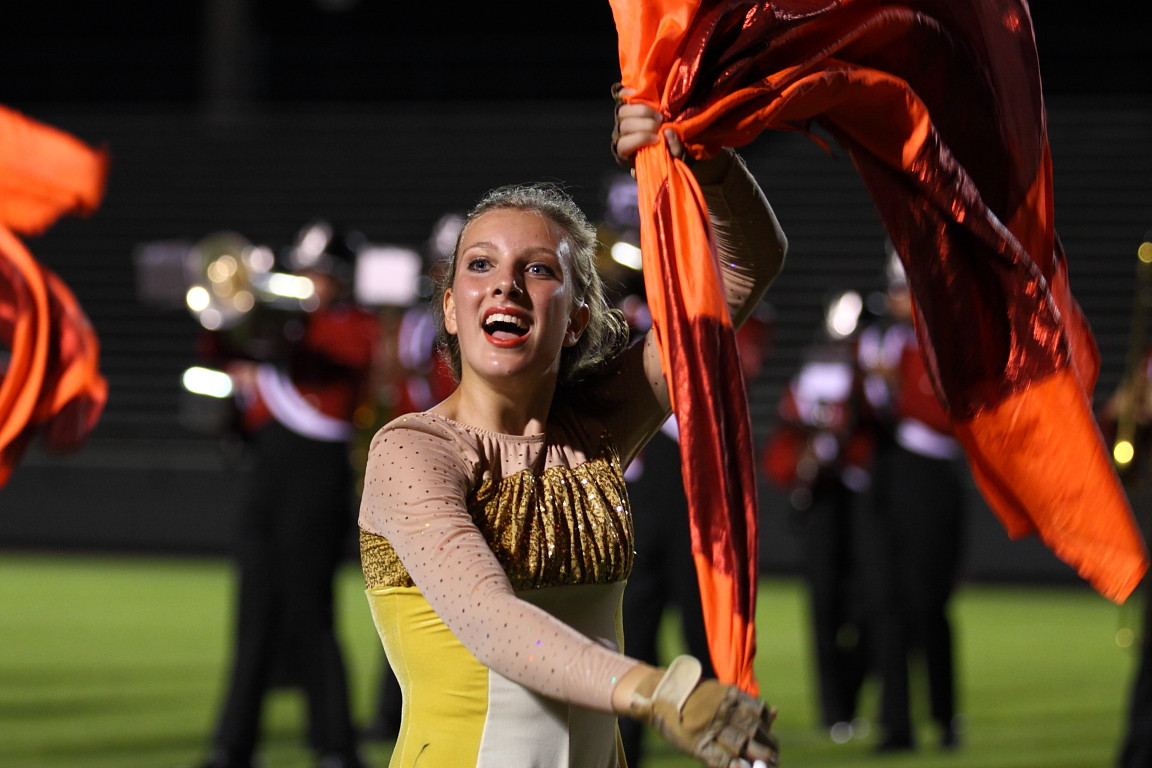 The faster telephoto lens allowed me to shoot at faster shutter speeds that enabled me to get shots I couldn't before and along with the better AF system of the 50D and the better optical performance of that amazing lens I was able to capture many more "keepers" than before. I continued to use the XTi and Tamron 17-50mm f/2.8 for my wide shots. With wide shots the shutter speeds are less critical, since the same movement at the same distance produces less blur. Using two bodies allows me to change from long to wide and back almost instantly.

I currently shoot with a recently acquired 7DII + the 70-200 (still a great lens). The AF system of the 7DII is much more consistent than my 7D (it replaced the 50D after about 3 years of heavy use). I'm looking forward to seeing how well the "anti-flicker" feature of the 7DII works with typical high school stadium lighting.

(Update: The new anti-flicker feature Canon introduced with the 7D Mark II is very nice and almost revolutionary for this use case. Not only does it give much more uniform brightness and color in each frame when shooting under flickering stadium lights which has dramatically increased my "keeper ratio", but since it always releases the shutter at the peak of the lights' cycle I can shoot about 2/3 stop faster than I could under the same lights with the same ISO and Av as before! Note that when shooting wide enough that light from more than one tower is in the scene if the towers are out of phase with each other then it doesn't work as well, but it still does better than without the anti-flicker feature.) 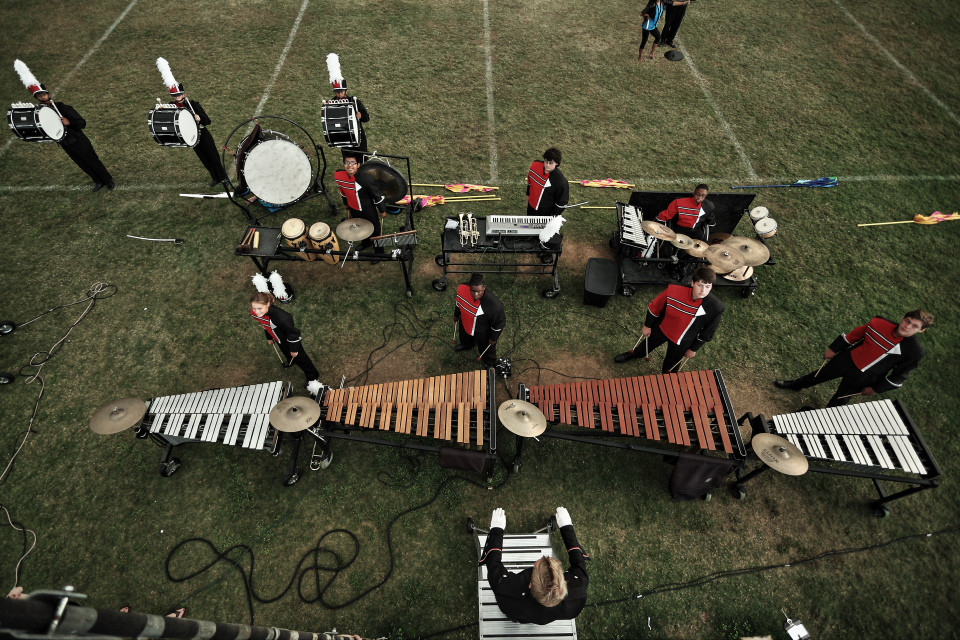 Okay, I cheated! This shot was from the practice tower during a full dress run before a game during mid-October. The sky was overcast and sunset was just a few precious minutes away. 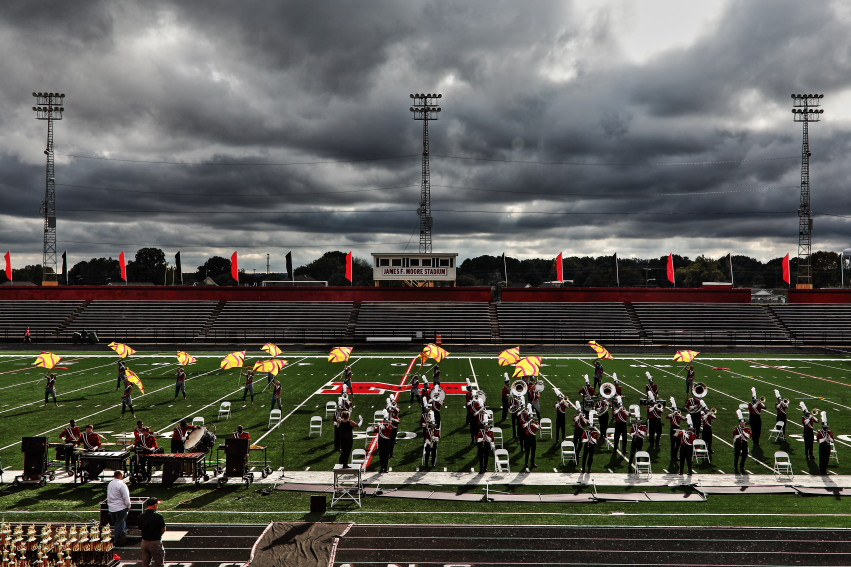 The full frame bodies along with my increased experience dealing with noise in post processing has really allowed me to push the ISO in recent years. I'm no longer afraid to routinely shoot at ISO 2500 and even ISO 5000 with the FF bodies when the situation dictates it. I'll go as high as ISO 3200 with the APS-C bodies (avoid the +1/3 stop ISO settings on recent Canons: 125, 250, 500, 1000, etc). This allows faster shutter speeds and, along with the better AF performance of my current gear, greatly increases my "keeper rate" from the days when I was starting out.

Beyond the gear, here are a few tips based on my experience: 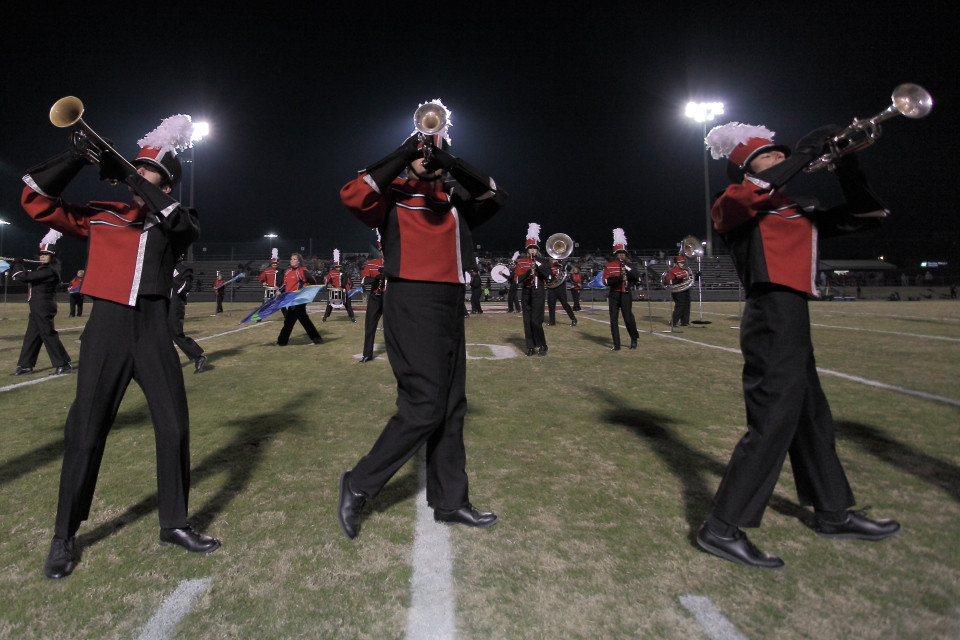 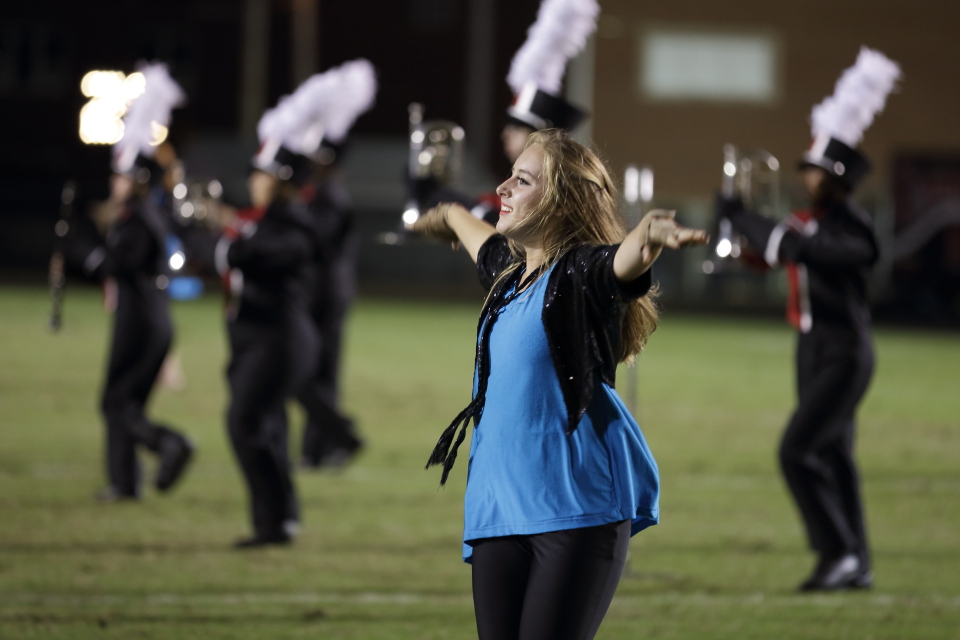 Canon 5DII and 24-105 f/4 @24mm, f/4, ISO 3200, 1/200 second from about the goal line and halfway between the sideline and the near hash mark. The stadium we were visiting only has four light towers centered over the 10 yard lines so the middle of the field is about 1-2 stops darker than the ends of the field. The band had a show that included a guard segment down near one of the end zones, so I planned and shot the show from that angle in that stadium and used the unique lighting to my advantage. 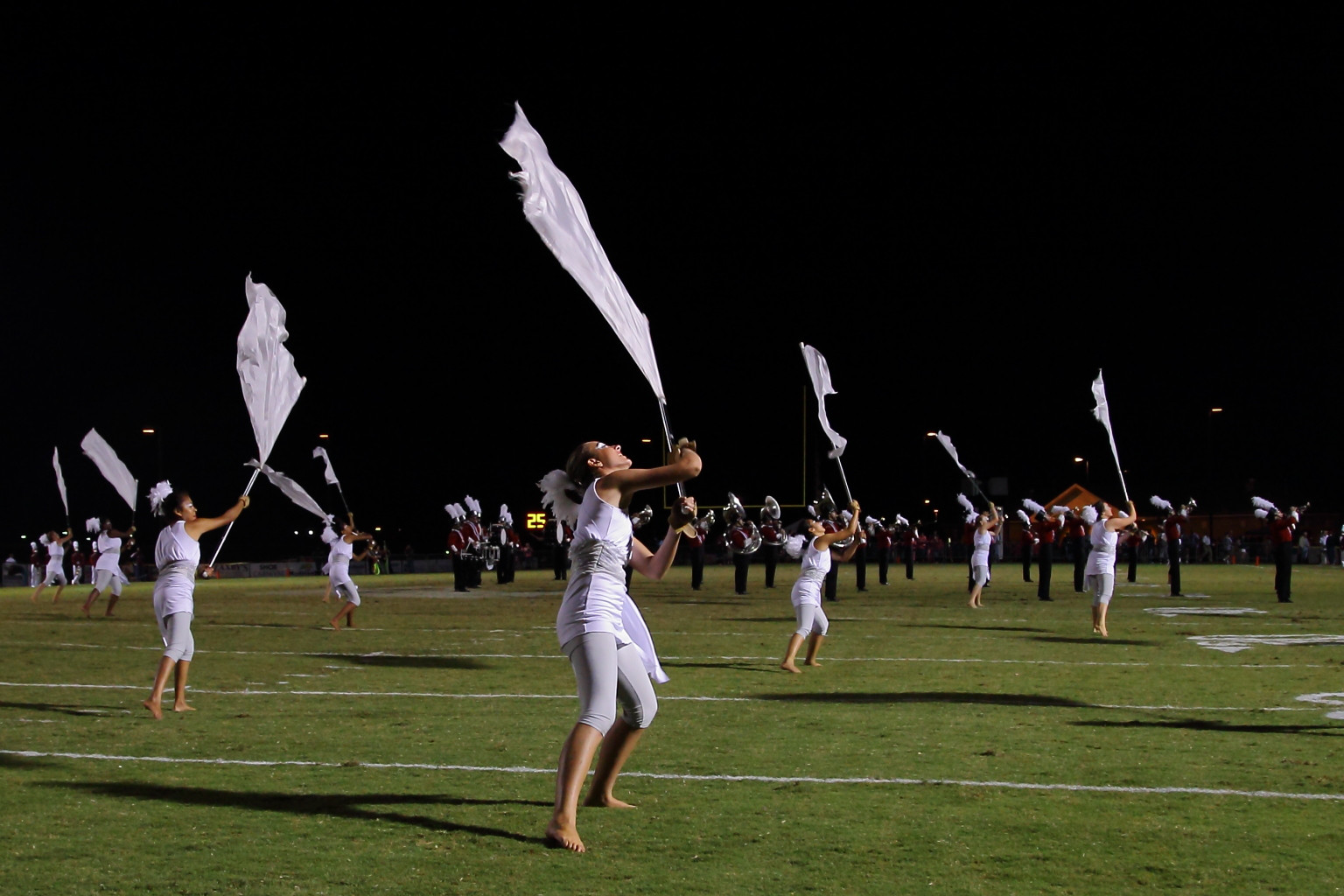 You're pretty much comparing apples and oranges here - the 24-105 and 70-200 cover very different focal length ranges. You need to get a lens which covers the range of focal lengths you're going to need.

If you photograph a Whole band then the 70-200 might be a no go.. You need to know how many people there are and be sure that you dont have to be too far away to get everybody in. So probably the 28-105 is a better option if your choice is between these two. Yesterday i photographed a couple, full body with the 70-200 and had to stay 20 meters away to get TWO (2!!) people in the shot. Another lense i would consider is the 24-70mm f2.8. If the canon is too expensive then you can go for the tamron alternative. It costs a lot less and the quality loss compared to the canon is very minimal, especially if you are an amateur photographer.

Go for a bright/fast lens, and if possible with a big diameter to gather as much light as possible. I want to get the 24-70 tamron myself as its a very good lense for a good price.

Scott Kelby has a lot of articles concerning photography on stadium in his blog.

For example: Shots from my first football shoot of the season

Not the answer you're looking for? Browse other questions tagged lens equipment-recommendation low-light or ask your own question.

17
What causes these inconsistent dark bands in some of my photos from an indoor event?
26
Is it really better to shoot at full-stop ISOs?
9
Lighting variances on sport mode
3
Why is Canon 60D considered 'better' than Canon 700D?
1
upgrading from kit lens