What is an electromagnetic diaphragm?

What is an electromagnetic diaphragm, how it works, and how is it different with regular diaphragms?

A specialized electromagnetic diaphragm mechanism operates in precise sync with the camera's shutter for reliable exposure control during high-speed sequences.

This is Nikon's explanation and it's not enough!

Rather than transferring mechanical motion from the camera body to the lens via a mechanical linkage (what Nikon calls a regular diaphragm), in order to control the size of the aperture diaphragm an electromagnetic diaphragm uses a small motor inside the lens to move the diaphragm based on electrical communication between the camera and lens.

There are a few advantages to using an electromagnetic diaphragm:

Compare the action of an electronic diaphragm on the left, from a Canon EOS-1v HS + EF 50mm f/1.4, to a mechanically linked aperture in an AF Nikkor 50mm f/1.4D driven by a Nikon F5 on the right in this super slow-motion video. Both are early 1990s era AF film cameras shooting at f/16, 1/4000, and recorded at 5000 fps. Even after stopping down, the mechanically linked aperture is vibrating and changing shape while the shutter curtains are transiting across the sensor! The electronic aperture closes and opens smoothly, has the same shape every frame, and is perfectly still during exposure because there's no spring to bounce against.

Here's a similar video that shows a side-by-side view of a Nikon D3 moving at 11 fps while shooting at 1/4000 with and without an AF Nikkor 50mm f/1.4D at f/16. Observe how much more noticeable the short "delay" is while the camera waits for the "bounce" to subside a bit before the shutter begins its movement. Even so, the aperture diaphragm is still vibrating during the time the sensor is being exposed. With the sequincial way the sensor is exposed as the narrow slit between the two shutter curtains transit the sensor at very short shutter durations, exposure consistency from one part of the frame to another can be an issue, not to mention exposure consistency from frame to frame for use cases such as time lapse videos. 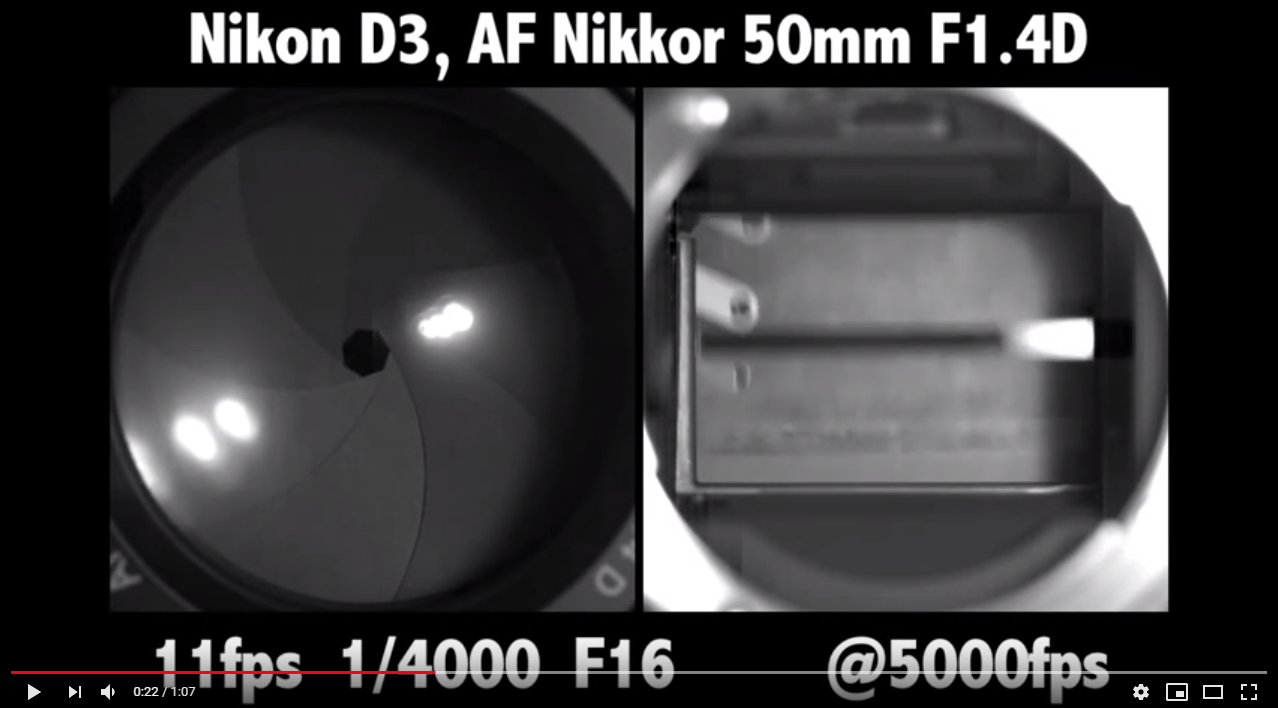 An electromagnetic diaphragm is the kind of diaphragm that has been in every Canon EOS lens ever made since the EOS system/EF mount was introduced in 1987. Minolta introduced a similar mount in 1985 which eventually became known as the Sony A-mount after Sony acquired Minolta. The more recent Four-Thirds and Micro Four Thirds systems also use electronic only lens connections. So do Fuji's X-mount interchangeable lens cameras and Sony's E-mount system. It is the kind of diaphragm that Nikon finally broke down and started adding to some F-mount lenses because their legacy mechanical aperture linkage that they have stubbornly held onto for decades is less consistent from shot-to-shot and is prone to inaccuracy if the aperture lever in the body is bent by improperly installing a lens, which is a fairly common issue.

¹ Note that with these two old film cameras the faster drive mode of the Nikon (7.4 fps) versus the Canon (6 fps) is mostly to do with the speed of the mirror movement and the speed of the motor drive advancing the film between each frame. The "bounce" against the aperture return spring was not as much as issue with film cameras that maxed out at 7-8 fps, but with digital pro bodies that can move at 12-14-16 fps, every microsecond is precious.

Not the answer you're looking for? Browse other questions tagged lens nikon lens-design diaphragm or ask your own question.

6
Do all Canon DSLRs have in-body AF motors?
13
Why is a lens darker than other ones when applying the same settings?
2
Nikon D610 error after each shot
1
Why am I getting an “ERR” while using my Nikon 50mm 1.4G lens?
0
What are the possible causes of an Err indication in a Nikon D7200?
1
What causes my camera to lose contact with my lens?
0
Timelapse color flickering

6
Why is maximum shutter speed fixed on Nikon DSLRs when using flash?
8
Why does my Zeiss Hasselblad Distagon lens have a 5 blade diaphragm?
2
How to do a long exposure with a Nikon D60
3
Can I use my camera to measure lens light transmission?
1
Is there a datasheet for the Canon 24-105mm diaphragm unit?
8
What motivated lens makers to now use 1/3 f-stops rather than say 1/4 or 1/2 stops?
0
Canon 24-105mm aperture diaphragm screw size
0
What techniques do higher-end lenses use to reduce astigmatism at high apertures?
1
Emulate Shutter Duration on RAW Photos using Exposure Stacking