Options for flash diffuser for travel?

I am going to travel abroad in a couple of months and I am considering, since I will take my photo-backpack with me (Tamrac evolution 8), to buy a diffuser for a Yongnuo 560 Mk III flash.

Most of the pictures that I will be taking with the flash are probably going to be of me and my parents, but I really dislike pictures directly flashed (lights too bright and shadows too dark) to the point that I would delete files from camera/computer.

Should I consider using a small softbox (and in case which one would be best for full-body and portrait pictures), or should I go for one of these plastic "caps" (which personally I don't like)?

Can you also suggest something that I can "re-use" for people photography?

Even though I selected the most complete answer as the correct one (users who are yet to read will thank me... I guess), I still decided for a solution provided by another answer and got myself a portable softbox. This softbox kit has multiple uses, looks quite good in quality, can most probably be reused and is extremely portable.

We have a couple of existing questions that might help. Take a look at When and how to use a push-on flash diffuser? regarding the plastic caps. They aren't really meant to be diffusers by themselves, since they are so small. Instead, they provide a bare-bulb effect, and if you are in a room with a low white ceiling and walls, the diffusion comes from light bouncing everywhere. They're no good outdoors or in big rooms (even though you'll sometimes see pro photographers using them this way; ah well). This is probably not very useful for travel, unless you know you'll mostly be traveling to small white rooms.

Next, see Are small on-flash softboxes useful, or a gimmick? The consensus is that they're not great, but better than nothing. So, you might try something there. I ended up getting the Honl Traveller8 Softbox, but I generally only use it for accent lighting as part of a multi-light setup; I've actually never tried it alone. If I were looking for something to use alone, I'd choose one with more area.

A little pop-up box like that is the best you're going to get on-camera, I'm afraid. For off-camera, which of course really opens up your possibilities for nice lighting, you're looking at carrying not just the modifier but a light stand or something as well. If you're gonna go for that, umbrellas are probably more portable than even the most portable softboxes.

Alternately, you could try something I just saw but can't recommend from personal experience: Westcott's Luna Grip, which is meant for hand-holding a remote flash in front of a collapsible diffusion disk of any size between 22" and 40". This would pack up fairly small, and you could use one of those 5-in-1 disks which includes a reflector, so you'd have other lighting possibilities, and you could press one of your parents or a friend or innocent bystander into lighting assistant duty, if need be.

The options I'm thinking of must have some characteristics.

I have not tested this, but it looks promising. The design is simple but great. Fstoppers Flash Disc Portable Light Modifier: 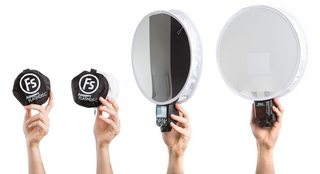 Another interesting concept is this card bounce flash diffuser. Probably opens the door to a Do It Yourself diffuser. 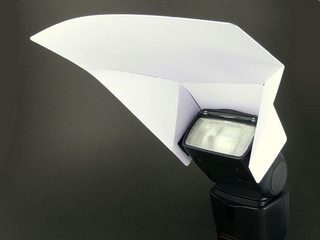 That fstoppers Flash disc Rafael posted looks pretty neat. Another alternative might be a flash bender.

If you don't mind carrying a bit more kit for a bigger light, you could go with a monopod + umbrella holder + umbrella softbox. Quite a bit smaller and lighter when packed up than a proper light stand and softbox. Though still a lot larger and heavier (and more time to set up) than the Flash disc or a Flash bender. 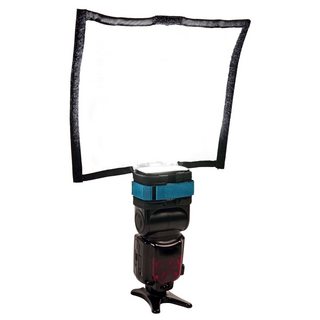 If you're actually going to go to the trouble of bringing off-camera lighting gear/triggers with you, then maybe a small softbox could be useful in some situations, but you do need to understand its limitations and limited usefulness, and I'd say don't go any smaller than 8". I use a cheap knockoff of the Lastolite Ezybox Speed-Lite (22cm).

But what might be more effective at softening/diffusing the light is simply learning how to bounce your flash from on-camera, and flagging off direct line from the flash with the black foamie thing.

The MagBounce is similar to the card-bounce diffuser that was proposed by Rafael, but it's a commercial product instead of something that has been bent from paper and therefore will surely not withstand travel in suitcase.

It requires a MagGrip magnet grip band around the flash head. You install it once, and then you can attach the MagBounce (and other magnet based modifiers) on the flash head. The MagGrip band weighs 113 grams and MagBounce weighs 318 grams. So, about one pound of total extra weight.

MagBounce is made from flexible material, so it's easy to store it in different camera bags. When you take it from the camera bag where it's stored in the compressed form, it automatically rebounds back to its original shape.

Of course, it will cost more than bending your diffuser from paper. However, it is more durable than the paper diffuser, and expands the effective flash head size considerably, creating much smoother shadows.

If you travel (and therefore off-camera flash used with an umbrella is not an option), and shoot outdoors or the ceiling is high or dark (so that you can't bounce the flash from the ceiling), MagBounce may be a good option for you. 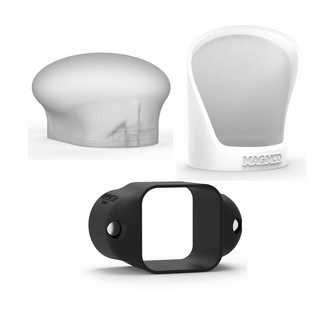 Large diffusers are not exactly practical for travel and small ones are not very effective. I would suggest exploring other options like bouncing from walls or the roof and combining flash with high ISO for a subtle effect.

My preference would be traveling light and leaving the flash at home.

Not the answer you're looking for? Browse other questions tagged equipment-recommendation flash travel people diffusers or ask your own question.

22
Are small on-flash softboxes useful, or a gimmick?
16
When and how to use a push-on flash diffuser?
2
Can I carry umbrellas and large light modifiers without special backpacks or bags while traveling?
7
Bare Bulb diffuser for travel?
3
Film photography with flash - distorted exposures
1
Portable Diffuser for shooting on the go

5
What are some options for a low-cost, general purpose, travel lens for Canon?
2
How should I do a DIY set up for shooting clothing items?
3
Can anyone offer me some shooting advice for a wedding ceremony?
1
Manual off-camera flash compatibility with multiple bodies?
0
How can I improve my clothing photography with a limited budget?
7
Bare Bulb diffuser for travel?
4
External Flash triggered by camera's internal trigger
0
Options for a 5-flash 4-group lighting set-up using Canon (compatible) gear