When does the first row of the next frame of CMOS sensor begin its exposure?

I want to ask about the starting time of a new frame in a sequence of frames captured by a CMOS sensor. Assume that the readout time of the entire sensor is 10ms, and the exposure time is less than 10ms. Will the next exposure of the first row of the sensor begin at the starting time of the next frame which is described in the first figure below? Or the exposure begin right after the readout of the previous frame complete (I think it's not possible)? 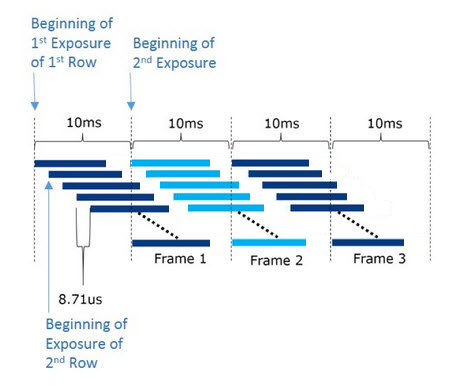 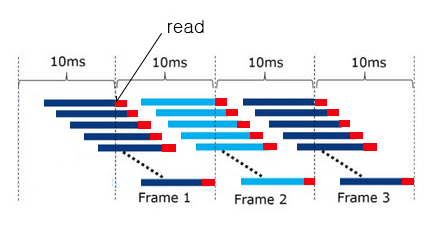 @mattdm: I have never asked "When a CMOS sensor is read line-by-line, which line is considered to mark the starting time?". It is the first line which marks the starting time, of course. But my question is when the exposure of the first row begin.

The answer is electronic shutters on CMOS simply cannot do shutter speeds faster than their readout time, which in your example sensor is 10ms (1/100s). The readout time is fixed, and it's not possible to start readout of the next frame before the readout of the last frame has finished or to somehow speed up readout.

The only exception is if the CMOS sensor supports a feature called global shutter, which is still relatively rare, in which case it does not read according to your diagram but instead operates completely differently (and I don't think it's relevant to shooting video).

I don't know if there is a standard for what point in time is considered the timestamp for the start of a frame. There may well be one, but that is very motion picture (film/video) related and getting off topic here. I'd assume that the former chart is more likely to be the logical way you'd define the start of a frame.

The basic answer here is: usually, no one cares. For the art of photography, cameras are meant to record images for the purpose of viewing, not metadata for the purpose of scientific instrumentation. The prevailing EXIF standard for metadata doesn't even record timestamps more precisely than one second, and there's usually no provision for network time synchronization.

So, if you're using an instrument built around a camera, consult its documentation or the manufacturer. If you're building such an instrument, pick a point a document it. If you're using a general-purpose camera and need extra precision for some reason, one with a GPS built-in may provide better temporal resolution with GPSTimeStamp — but still probably not enough to distinguish between very fast frames in succession.

Not the answer you're looking for? Browse other questions tagged cmos-image-sensor framerate or ask your own question.

21
What are the advantages or disadvantages of a back illuminated CMOS sensor?
0
Readout time vs Frame rate of CMOS sensor
0
Does FPS matter when taking long exposure stills instead of video?
2
What are the bottlenecks in a regular CMOS sensor chip?
4
How does on-sensor phase detection AF not impact the image?