Is there a camera which can capture all shades from dark foreground to bright background?

Question: Is there a camera that can capture all the shades of a dark foreground object as well as a bright background?

I am trying to take a picture of my black cat against a bright summer sky. My camera will only give me one of these two:

But my naked eye will take in all the detail, whiskers and cloud.

Am I seeing an inherent limitation in any camera or just my cheap digital?

The problem you are experiencing is the lack of dynamic range (the ability to represent different levels of brightness) in you photo.

The first step to increase the dynamic range is to set the camera to capture RAW files. The Raw format saves all of the captured image data from the sensor and this comes with the benefit of increased dynamic range. This RAW file can later be converted to a JPEG file using a RAW converter (a program that can read these files) and you can decide to brighten the dark fur and darken the sky in that RAW converter.

The second problem you have to overcome is the inherit limitation to dynamic range of the sensor itself in the camera. Modern sensors have a dynamic range of 12-bit to 14-bit and that symply won't let you take a photograph of a very dynamic scene (both very bright and very dark) without loosing information in the shadows/highlights.

You can increase the information available by bracketing several shots and combining them for a greater dynamic range. This technique is usually referred to as HDR and involves taking multiple photographs at different exposures (both under, balanced and overexposed) and later combining them into a single photo. In this combined photo the overexposed image will provide information about the details in the shadows and the underexposed image the details in the highlights.

There are really no particular camera to recommend. Modern cameras all have great dynamic range and in the event it's not enough either be happy with the result, bracket shots or use a filter.

I'm surprised nobody else mentioned this, but you could also just try to get more light on the cat. This could be sunlight, or fill flash from the camera, or some off-camera light source. This might be easier than getting bracketed images of a cat...

Shoot RAW image and choose the compression of dynamic range yourself. Even if the camera can do it, printouts and monitors can't, so you need to arrange the tones as you want.

Newer mid-grade cameras have 14-bit A-to-D and can probably capture that sceen in raw.

bracket. If your camera doesn't hace the range, combine them using HDR software. If it does, choose the exposure that gets everything rather than clipping one end or the other.

Here is an "ordinary" snapshot taken with a camera phone, after improving it in Lightroom as best as could be done. 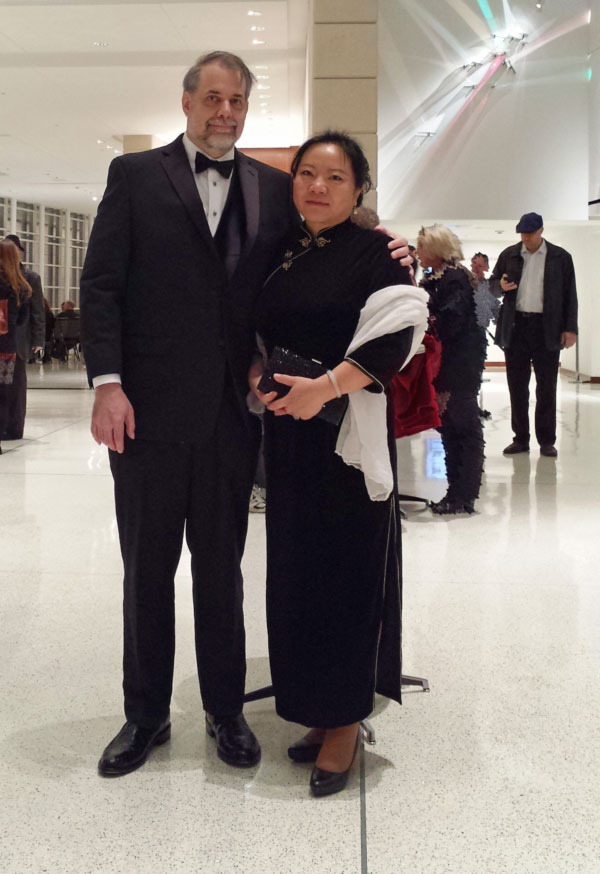 Even so, the black is losing detail though the white is fine. That reminds me, the cameas tend to underexpose on purpose, so you'll find the whites fine and the blacks missing, in this case.

If you bracketed the exposure, you might get one with better blacks and white still OK, or a compromise more what you wanted. The camera always leans to blacks. (More technical: bad lighting further reduces the range, because the green channel or another will overflow first)

Now here is another taken with a dSLR of recent vintage, that has a 14-bit sensor and raw files: 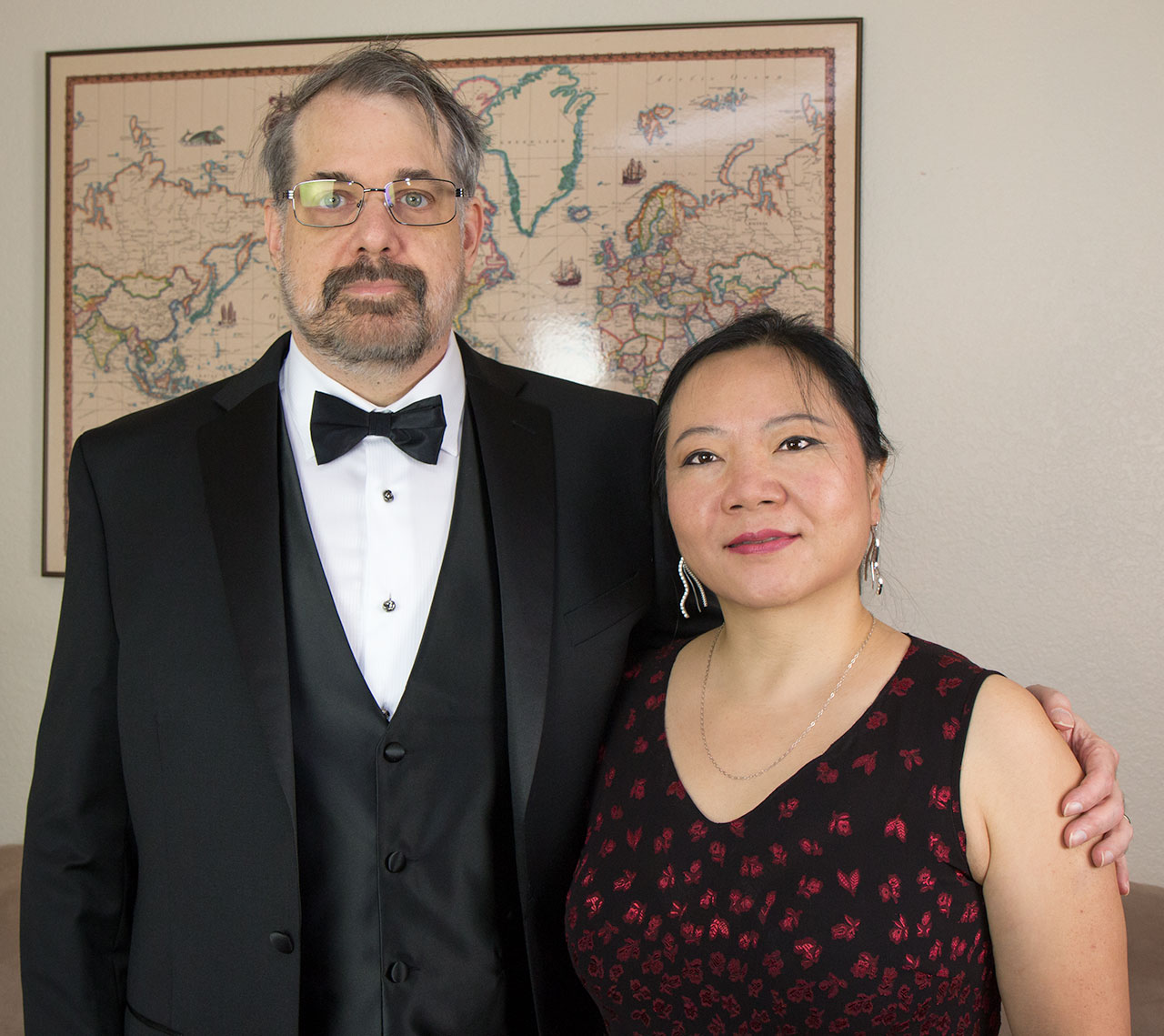 Notice the details on the black jacket and on the white shirt. It all fit in the exposure, no problem. It was better than I had expected in fact, with range to spare. I used the histogram to make sure, and adjust the exposure using the [+/−] exposure compensation control.

Just because it showed up in the raw file (as indicated by the histogram) doesn't mean that the web browser or consumer-grade screen can display it. So, it needs to be compressed in range. but, rather than an automatic conversion, you can choose what is important.

How much black detail? It doesn't need every wrinkle, just show the different layers and a some texture so its not inked out. How mich white? Far less, in this case: just to show layers and a tiny amount of texture on the shirt.

I used Adobe Lightroom in this case, but this is the power of interactive RAW conversion in general.

Edit: if we presume that the outdoor shot does exceed the latitude of a 14-bit dSLR, then it doesn't matter which one you use: you can't natively capture that all without spending orders of magnitude more than what you would on a normal camera.

You can improve that by using multiple exposures. IOW, bracket, but not to simply choose the right one. Instead, combine them. You can use the cat from a brighter shot and blend it in. Or, use the sky from a darker shot or a different photo altogether.

This is generally easy to do in Photoshop. Stack the images as layers and paint the layer mask to show the cat. If the cat did not move between shots (a fractiom of a second if pre-programmed a bracketing sequence burst) then you don't care of anything else moved, and Photoshop can line them up for you.

But in any case you still need to reign in the dynamic range to make a presentable result, such as can be viewed on a web page or printed.

In this case, where a little bit of black in the scene is causing trouble in an otherwise capturable image, you might rely on the manner in which the darkest values slowly taper off non-linearly, and recover detail from black even though it's nominally out of range. It depends on the scene.

So, don't sweat over the exact model camera. Any late-model dSLR above the lowest product tier is about the same. If you want to really optimize, you can look at the DXOmark website where they have measured the dynamic range of most cameras. It seems that the Nikon D810 is the champ at 14.8, D7200 and D750 and D610 are up there, etc.

Aside from post-processing HDR (or exposure fusion) processing and fill flash, there is one third thing you could try, if your dSLR happens to be a Canon that's on the list of supported bodies for Magic Lantern. Magic Lantern is an open-source firmware add on that can add additional function to your camera.

One of the new functions that's been added is a mode called "dual-ISO", which can do the equivalent of HDR in a single shot (so it can also be used for video). Essentially, the camera is told to sample alternating pairs of lines on the sensor at two different ISO settings. So, for example, you could use iso 100 and iso 1600 and have the effect of two shots exposed 4EV apart. You then run the resulting zebra-striped file through the cr2hdr utility (I use the Lightroom plugin). The result will look like severely underexposed DNG, but you can manipulate the DNG file with a lot more latitude and less noise than a single exposure would give you.

21
How many stops can a digital camera capture?
8
Is there always a way to capture all the light ranges to get good HDR images?
5
Are there any situations in which it makes sense to raise the ISO in bright daylight?
7
Can telephoto lenses cause the background to be darker than the foreground in the same light?
2
How do I prevent the background from going dark when using the flash with a subject?
1
Why doesn't my camera capture a dark picture when it looks dark to the human eye?
0
How to create an image with star trails in the background and clear, bright foreground objects?
14
How can I take a photo of a dark bar with a bright sign?
11
Either background is overexposed or the foreground is underexposed. Are there possible solutions/approaches?