How do I interpret the characteristic curve chart for film, and how does it relate to exposure values?

Here is a characteristic curve of Velvia 50: 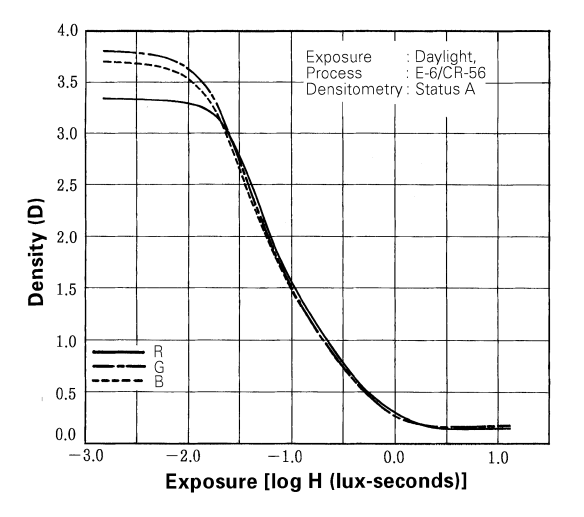 What does 0.0 value represents (how to interpret it)?

Pretty much all your questions are answered in this guide:

What does 0.0 value represents (how to interpret it)?

Obviously with slide film like the Velvia, the density is at its greatest in the blacks (left hand side of exposure) because that's where it blocks the most light, so the density relates to the blackest parts of the image. On negative film the density increases to the right instead for the film.

Convert log lux seconds to EV (absolute - for a given ISO):

Source: the guide I linked above.

Obviously how to expose is a choice to make, but it makes sense to try and fit as many of the lightest and darkest parts of the scene into the linear part of the curve to represent them accurately.

In the general sense average grey (18% card) mapped to, say, the density of the mid part of the most linear part of the curve, like you suggest, seems to make sense.

Not the answer you're looking for? Browse other questions tagged exposure film or ask your own question.

19
What is the difference between luminance and illuminance?
2
Should the exposure count rewind with the film rewind knob for Nikon film bodies?
9
How could some old film cameras without electronics set exposure?
6
How to read a film color response chart?
9
How does a film camera perform exposure compensation?
4
What is the relationship between film speed and the ISO setting on my film camera?
1
Does the development time in Massive Dev Chart include the agitation time?
2
Why does my multi-exposure film image appear darker than calculated?
4
What mathematical operation does the raw exposure slider in photoshop do? And how does it differ from adjust exposure when the file has been opened?