What algorithm can I use to simulate bokeh?

I am attempting to write a script that loops through each pixel in a photograph and applies a bokeh to the image as a whole.

I built a script based off this link, however that seems to be a hack.

I have three input images: a black and white depth map, a photograph, and a bokeh "brush" image (which is currently a hexagon). For every pixel of the photograph, I stamp the bokeh brush so it is centered on that pixel and in the color of that pixel.

It looks... okay on tiny bokeh brushes, but once I increase the bokeh brush size at all it ends up looking like gaussian blur. Here's a picture of times square blurred with my algorithm: 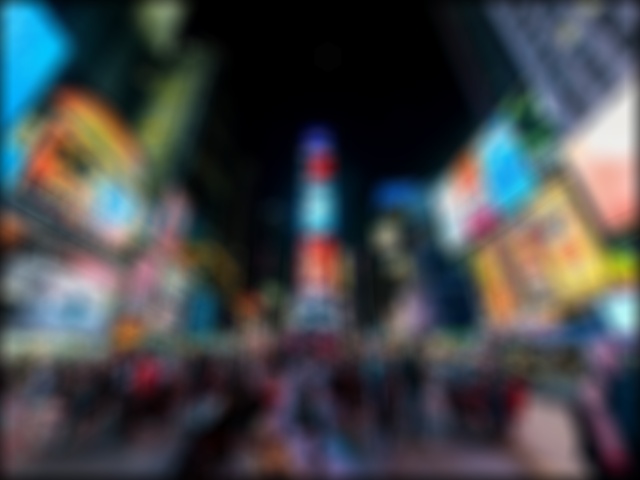 Nevermind the dark edges, I can fix that.

You can sorta tell it's different from gaussian, but it's still a long way away from what could respectably be called bokeh, with crisp edges: 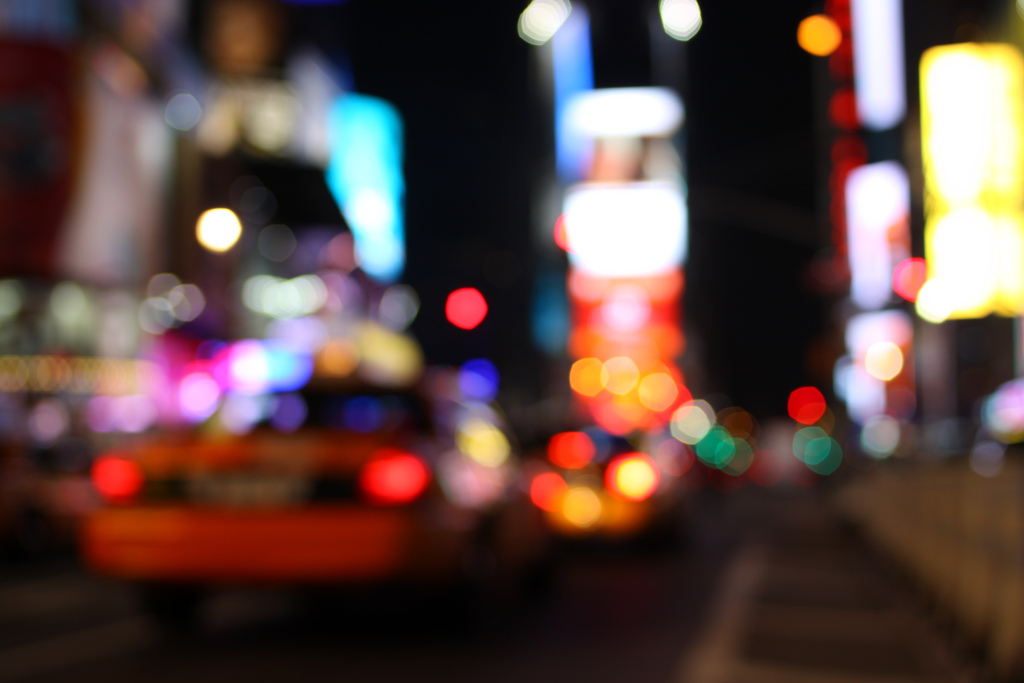 I understand why my algorithm does what it does... how can I more accurately simulate a bokeh?

I think the main problem is one of dynamic range, your algorithm is probably right but you're working on the wrong type of data.

A point light source that would otherwise clip and go pure white gets spread over a larger area by a defocussed lens, so that it forms a disc that isn't as bright and therefore doesn't clip.

That's why you get those nice circles in your real bokeh image. If you clip the signal (making it less bright than it otherwise would be and then spread it out with your bokeh simulation you get a dim circle (or hexagon, or whatever) that doesn't stand out and thus doesn't look realistic.

What you have in a real image chain is:

What you are doing is

You wont get the correct result because you're not working with linear data.

What you can do is attempt to linearise the data, replace any dynamic range that has been lost to clipping, perform your bokeh simulation, and then redo the nonlinear operations!

Here's an example. I've started with an HDR image that has been tonemapped, giving a highly nonlinear result. This is the worst type of image to attempt bokeh simulation with!

Doing a standard convolution operation to simulate bokeh (using photoshop's lens blur tool) yields this result, which is very similar to what you are getting:

To get a better result, I applied an extreme curve to try and get the image back to roughly what it would have been before tonemapping, where the highlights are much, much brighter than the rest of the image. I did this by with the levels tool, pushing the centre input a long way to the right, from 1.0 to about 0.2). I then applied the lens blur tool, just as before. Finally I applied an extreme curve in the opposite direction to the first curve. The result, whilst a long way from perfect, looks much more like real lens bokeh:

If you're doing this in code, then try cubing each value, then applying your bokeh simulation routine, then take the cube root of each value. You should see an improvement. It might take some tweaking.

tl;dr even if you have implemented a perfect mathematical model of bokeh, it must be applied on unclipped linear data. If you apply the same calculations to heavily modified data (even a standard in camera JPEG is heavily modified from a mathematical point of view) you will get a very different result.

First of all, in optics, only light adds up and darkness does not. Make sure that your algorithm does not bleed dark pixels outwards their original location. Resulting pixels should rather resemble maximum of nearby source pixels than average. Or, to be even more exact, you'd be summing up logarithms of affecting source pixels.

Another possible cause why your edges might not be sharp would be if the edges of your mask are not sharp. The animation in page you've provided as reference could be misunderstood so that in a mask, original pixel is bright and others are gradually darker. This would translate into muddy edges in calculated bokeh, too. In photography, apertures have definite edges, not gradual ones. So actually most of the pixels in a mask should be of equal brightness and only edges (where less than a pixel should be colored for a smooth line) can be some shade of gray.

Not the answer you're looking for? Browse other questions tagged software image-processing bokeh algorithms programming or ask your own question.

27
What's the difference between Bokeh and Gaussian Blur?

5
What software tool can I use to convert a photo to line drawing?
6
What size hole do I use to make differently shaped bokeh?
6
What algorithm can be used for deflickering timelapse shots?
12
Would a demosaic algorithm for black and white be useful?
3
How does 18% exposure algorithm work?
0
algorithm deflickering timelapse shots?
10
What is considered high quality bokeh?
7
Does it matter what edge finding algorithm you use?
8
Besides mirror lenses, what can cause ring-shaped bokeh?