Why do my photos lack texture/detail/microcontrast? [duplicate]

edit : I have added the relevant EXIF data, Still exploring how to add the EXIF data inline with the photos, please excuse english is not my first language

I am a newbie photographer with Nikon D3300 and the kit lens + 35mm 1.8. Previously I used to have a Sony Nex 5r with 16-50 lens. I "Upgraded" to a D3300 because I wanted cheaper lens, more accessories but also more detail that I thought will come with the increased resolution.

Unfortunately most of my pictures, especially flower pictures lack detail. I am not talking about "Macro" level detail. But textures which were visible previously on the nex5r are no longer visible with the Nikon.

I have already tried the following:

It seems like either the lens or the sensor are just not resolving enough detail.

I generally shoot in single point Auto Focus mode using the centre point and placing it on my target. Picture control is set to " Standard" with saturation "+1" and Sharpness "+3" Several members have commented that the first photo is Out of focus. Well the target focus was the white flower, and I took several samples to rule out camera blur. Also Even when taken using manual focus and using In camera Viewfinder focus Indicator, correct focus was indicated by the camera but still the flower does not appear to be in sharp focus in any of the pics. As I generally use the viewfinder, I may infer that phase detection AF is not as precise as contrast base detection often used by competing non mirror cameras. 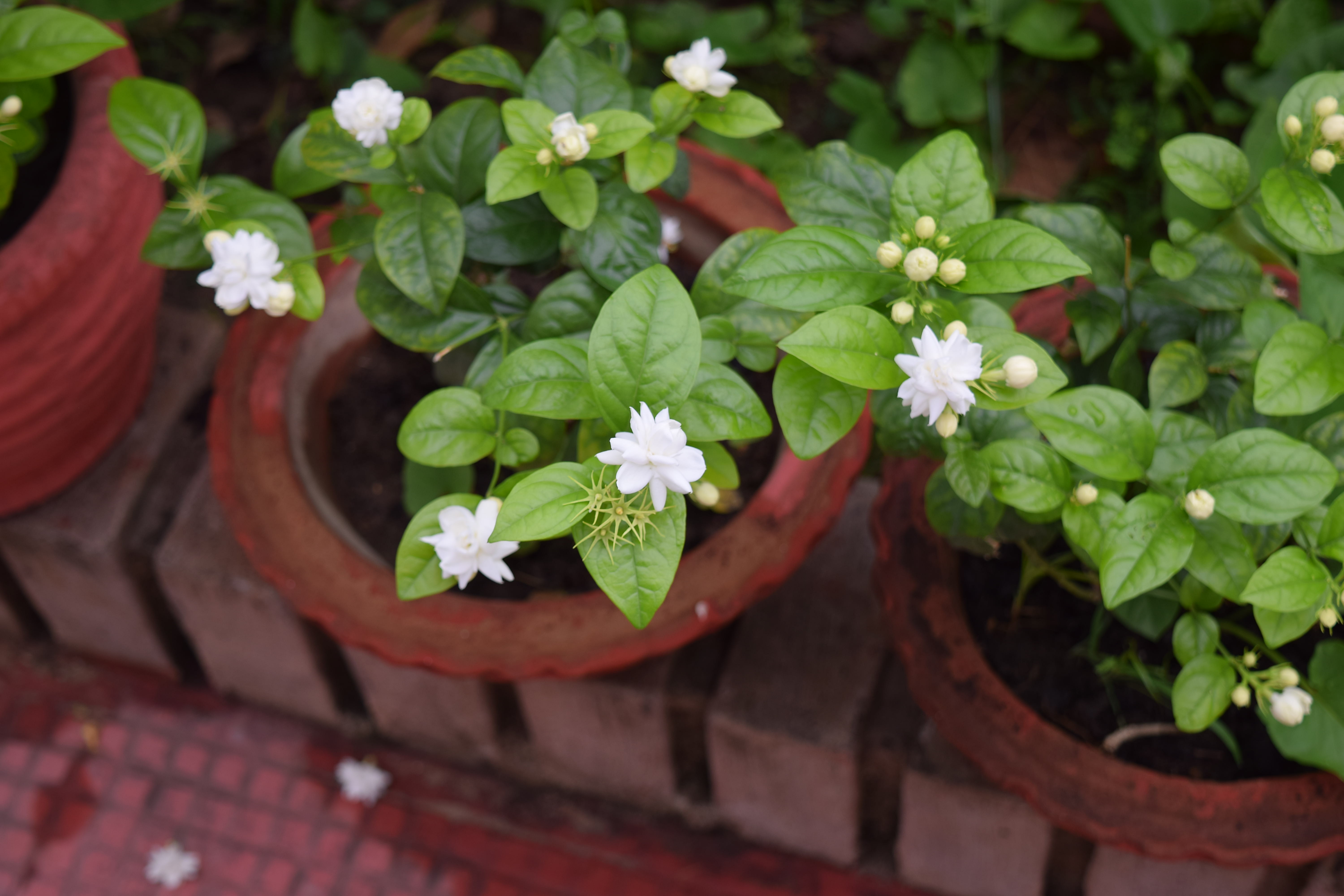 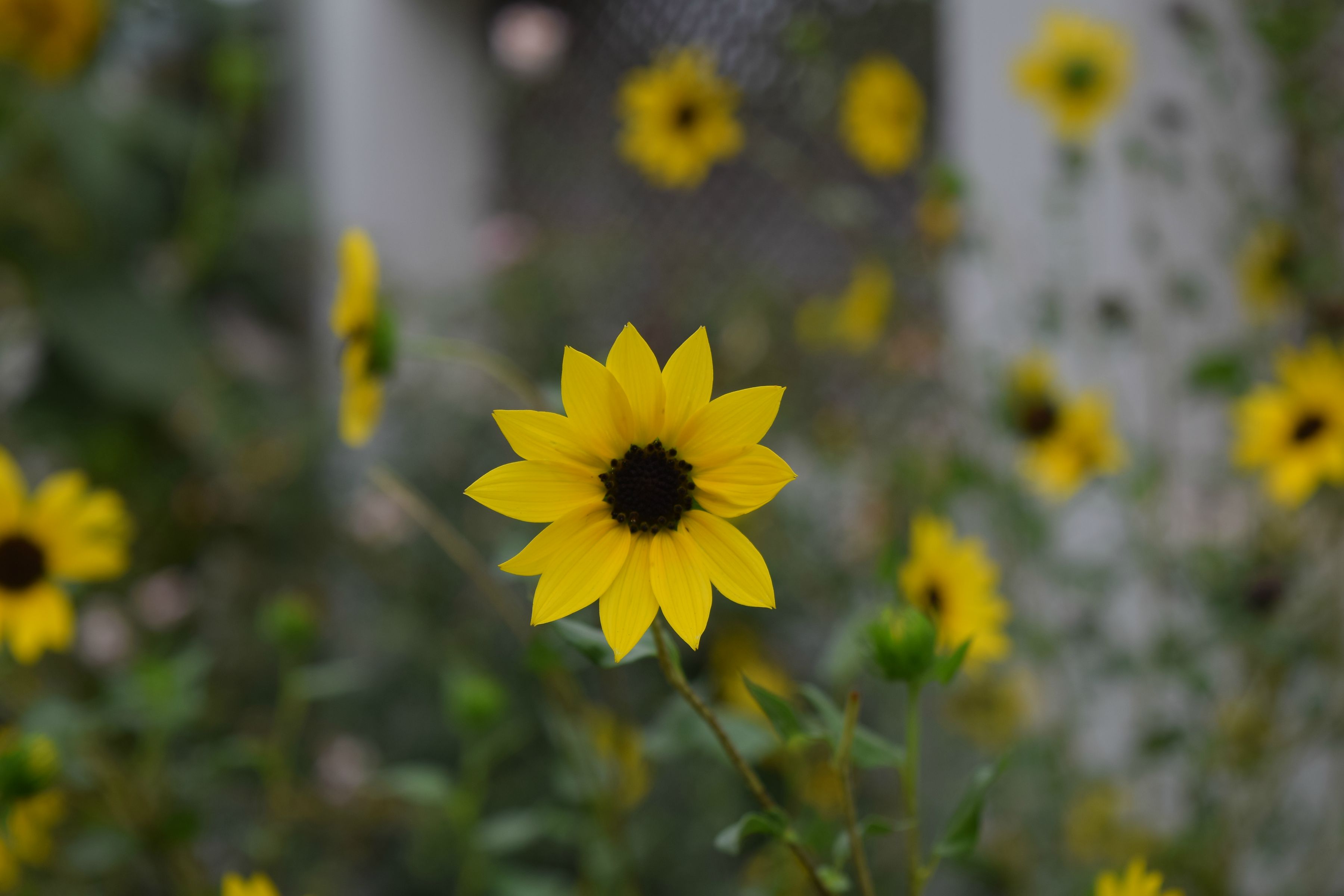 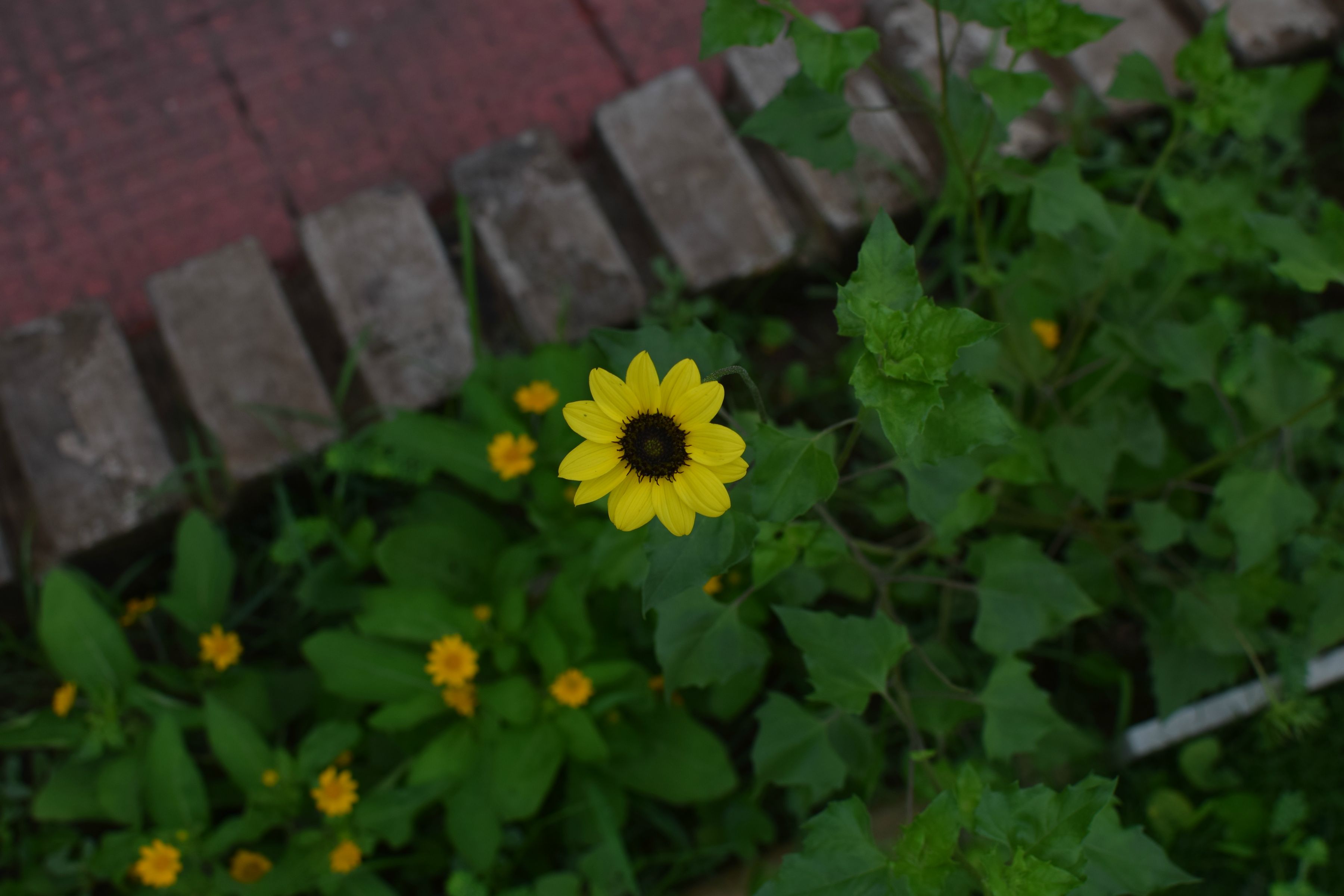 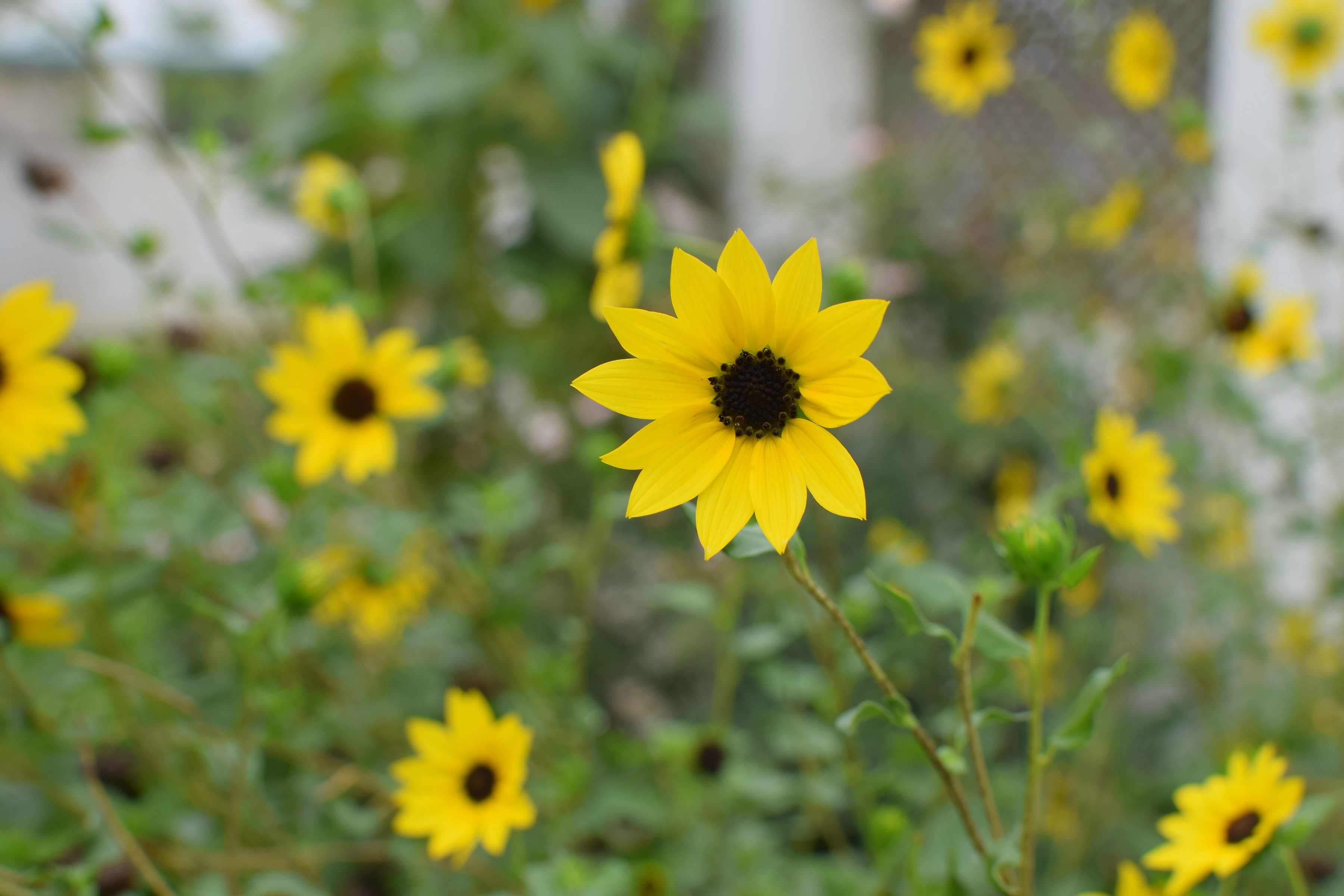 I know it may be just paranoia , but if it is a lens or a misfocus issue then I must contact Nikon. Please advise.

While It might be true, That the photos may be post processed to look better, Is there some setting I can change to get a decent Jpeg output from the camera itself? To put it bluntly I would like a jpeg as thrown out by mirrorless cameras from Sony?

also I have tried showing the focus point in the first photo (the blurred one) by using a screen shot from the view nx2 software from Nikon: 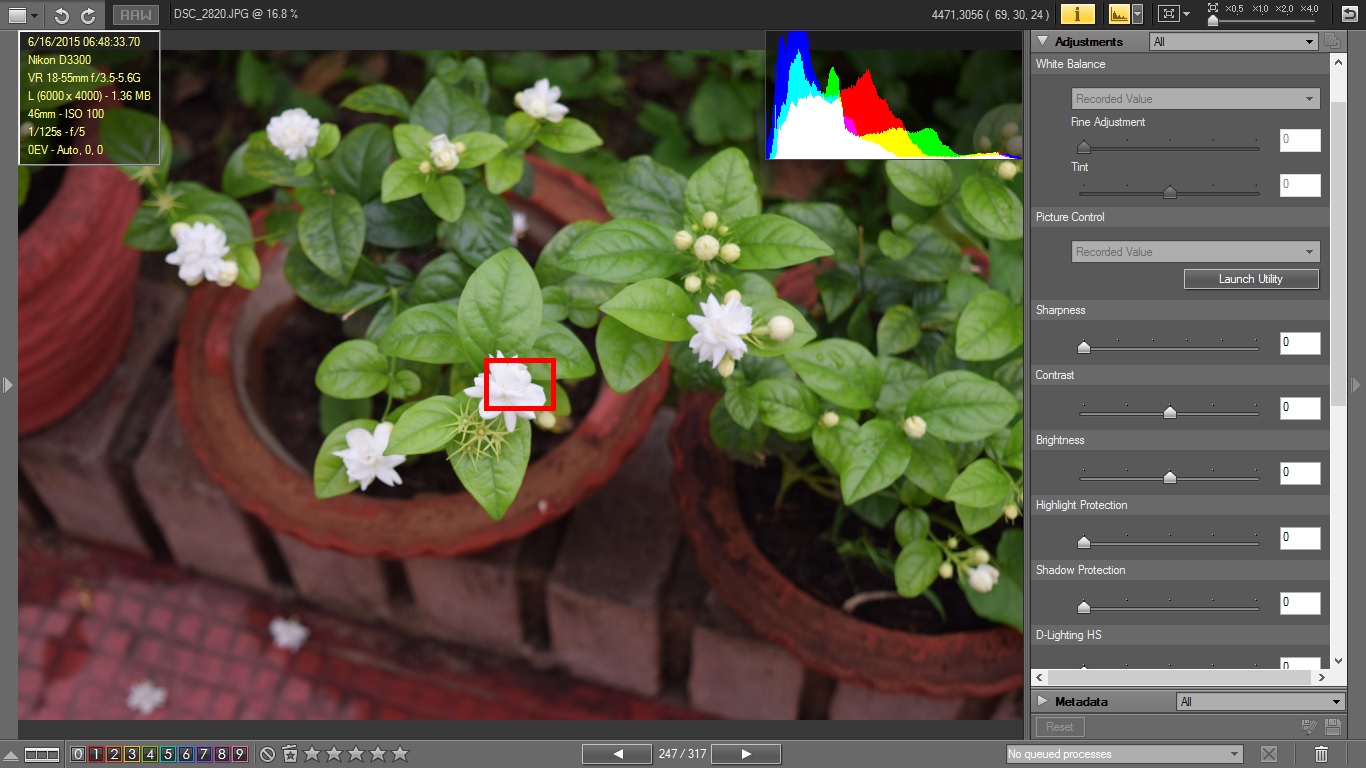 No guarantees, but start with this.

The first photo seems to be sharp nowhere but closest to in focus at lower middle on the flower bases (petals gone)(name escapes me). If you get that when focusing is as sharp as you can get and you have checked that this is so you "have problems". But the other photos suggest that this one was just not properly focused.

You do not say which lens you used or the lens and camera settings - these all matter in evaluations.

The image below is a crop from your 3rd photo. It looks reasonably good. If this was from the kit lens it may be as good as you can expect on average. But, it appears that the focus point MAY be slightly behind the flower petals. I have sharpened this on the high side of wise, partly to make the stem stand out more, but the fact that the top of the stem appears quite sharp, even though it is physically a reasonably significant distance* behind the 'plane' of the front of the flower's seed head, suggests that the hyperfocal point is somewhere between the seedhead face and visible start of the stem.
If so, then focusing slightly forward of there would improve the seedhead sharpness.
(~ Crop area shown in inset) 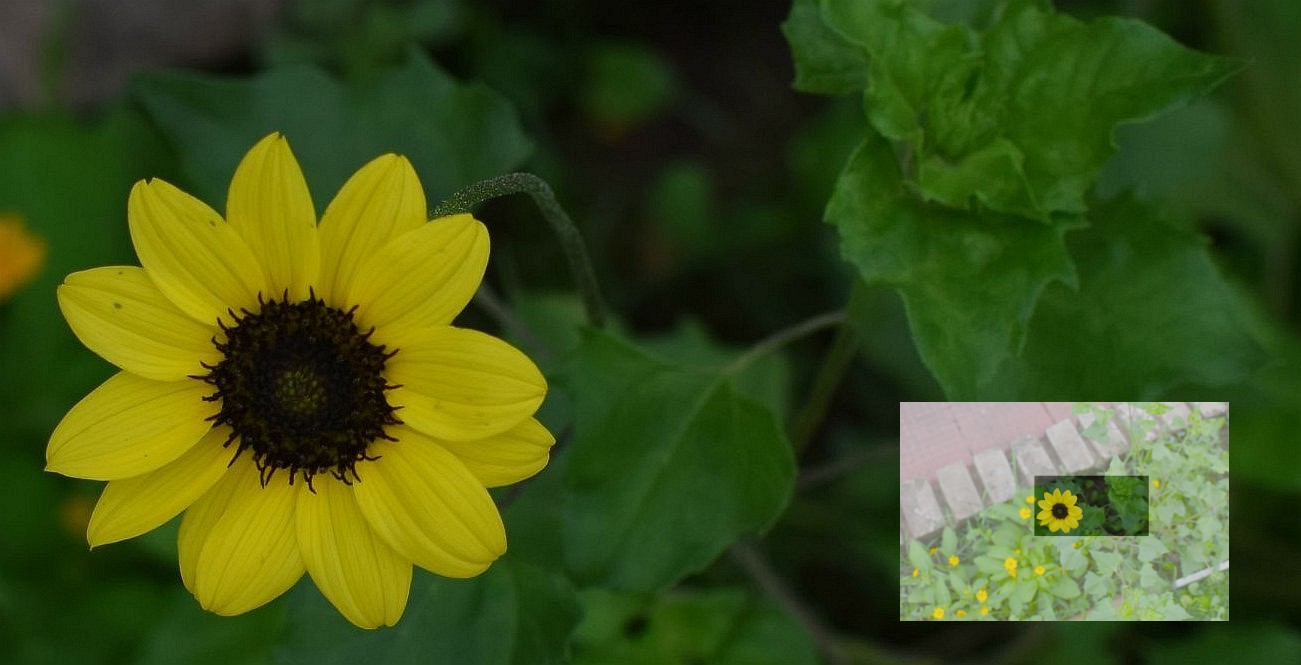 Larger version here - note stem detail. Also, leaves at right of and behind flower are arguably somewhat sharper than may be expected.

Establishing where the camera focuses and if it does so consistently is a good first step.
Focusing can be by using AF and by manual adjustment. Both may give results both from each other and from what you expect (ask me how I know :-) ).

Many DSLRs have a micro focus adjustment feature that allows the AF focus point to be moved"forward and back" relative to where the AF sensors typically determine the focus point to be. A web search dis not show that mentioned for the D3300. If it exists it allows you to adjust for the results below. If not, you can allow for the result manually (but if it is more than minimal you may wish to have something 'fixed'.

I have found that a good way to assess actual focus point compared to intended point is to photograph a fine uniformly repeating pattern at a slant angle, noting where focus "should be' and actually is. Lines on a pad, a page of newsprint and similar are usually good enough.
I have found things like flat metal mesh with good regularity and definition work well.
The photos below are of an anti-spatter frying pan cover. Note that AF may well function differently with different sizes of focus objects and contrast ratios and that other targets should also be tried.

This is a wide view without much depth in the direction of interest.

This is cropped from the same photo but running away from the camera but turned at 90 degrees to fit in this page.

If the tasteful brown spot in the centre was the intended focus point it can be seen that the actual focus point was slightly behind the intended point. The larger versions show this much better. Note that the varying range is caused by "perspective" variations and that at close ranges other factors may become relevant. Testing results by also focusing 'square on" to targets is advised. The tests are intended as a data source for cogitation and not as certain proof of anything in their own right.

A user comment from this DPReview D3300 review page may be pertinent. Their comment is copied below. I'd have hoped that f/3.5 would be 'fast' enough for an AF system.

This makes focusing pretty hard by itself. Neither the kit lens, nor the 35 mm f/1.8 is macro-capable, so their performance degrades in this situation.

Since you have not provided EXIF info along with your images, it is quite hard to debug what the issue is. Your last image is not bad at all, it is just not post-processed.

To check if your lens + camera resolution is correct:

The picture shows the resolution at that particular distance and at that aperture.

Note that on Nikons usually there is an "Image processing" menu item, which, if it is set to Neutral means no sharpening of any kind happens on the saved image. You can change that to other setting, although I prefer doing all sharpening in post-processing. You can also do local contrast enhancement on your PC for adding more "crisp"-ness, etc. You should then capture your images into RAW, and do the postprocessing starting from there.

Not the answer you're looking for? Browse other questions tagged nikon resolution dx or ask your own question.

3
How do the Samyang and Nikon 85mm portrait lenses compare?
4
Long Exposure shot - subject too bright
1
Nikon D5200 overexposed shots in “auto” modes
2
Higher Noise in Sunrise shooting
0
Focus issues in a Nikon 24-70 f/2.8 lens
6
I keep getting out of focus shots on manual focus - Why?
5
Why isn't my Nikon D3400 freezing motion even with the shutter set to ¹⁄₄₀₀₀th of a second in View Finder Mode?
2
help!! Err on Nikon Df while traveling in Ecuador