Here are some scenarios for barrel distortion:

Why is there barrel distortion in the above cases?

Does barrel distortion have anything to do with whether the subject is focused or not? (If the target is too close to the lens, it may not be possible to move the sensor for its image to be focused due to the limit size of the camera.)

Barrel distortion is a form of distortion (not to be confused with other aberrations). It is often found with shorter focal lengths such as the lens in a phone - especially those trying to get the wide rather than narrow angle field of view.

This distortion is also often seen with a single element lens, such as those associated with magnifying glass.

If a lens exhibits barrel distortion, it will be present at all focus distances. However, you will likely have more difficulty noticing the distortion on something that is distant than near by.

The way to correct for this is to use a more complex lens that, well, corrects for it.

The thing to realize here, especially with systems where the camera isn't the most part of it - its not really worth it to make more complex lenses. They're harder to manufacture, cost more, and aren't supposed to be great quality in the first place (price points).

For more complex lenses where barrel distortion exists, they are often either older designs where manufacturing and optical technology was lacking (we've been creating glass with ever higher refractive indexes and devising new ways to polish aspherical lenses), or the barrel distortion was the lesser of the evils of aberration that were being corrected for. Most consider astigmatism, chromatic, and coma aberrations to be more important to correct for than barrel distortion (which can be corrected to an extent in post production more easily than the others).

The specifics of the effect is that light at the edge of the lens bends more than it does in the center of the lens (ref). This is especially noticeable in lenses with a small diameter (that phone again).

The solution to this is to use a larger lens (larger sensors demand larger lenses which in turn have less barrel distortion inherent in the design). If possible, use an oversized lens (putting a full frame lens on a cropped sensor, or a medium format lens on a 35mm sensor). Another option is to use a longer lens and step back a bit. Neither of these may always be practical.

Fortunately, barrel distortion is rather predictable. Most post production programs will allow for a correction of it, if you know how much the scene is distorted. Shoot a photo of a checkerboard and correct that and you will know how to correct for all photographs with that lens in the future.

Barrel distortion is also a consequence of real life trigonometry and perspective.

Please, do an image search for the term "Vanishing point", specially as related to drawing.

Now let's do a thought experiment.

By logic, you know that the line of the train wagons' roof is parallel to the rails. Now you grab a camera with a very wide angle lens. That lens can actually see towards the front of the train and towards the back at the same time. In each extreme of the train there is a vanishing point, where the rail line and the roof line converge.

So, what happens if two parallel lines are forced to converge in both extremes while keeping the middle section apart? Obviously it is impossible to do while keeping both lines straight, but if we bend them, then you get a shape that is like an very elongated eye.

This effect happens right-to-left, up-down and actually in 360 degrees. That is why when we shot a square or rectangular object with a very wide angle lens, its borders look further apart in the middle.

This is how we actually see the world, but the brain "knows" the lines are actually parallel and we forget about it.

Since perspective is a real life fact, it affect all lenses, but some lenses are designed to compensate for that, others may actually be designed to exaggerate it.

Here is a quick drawing trying to better explain myself: 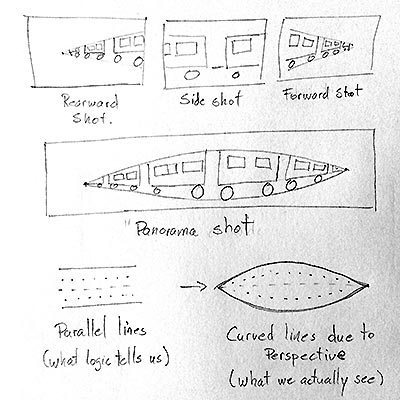 The question is using the wrong term. The distortion that appears when you get too close with a wide angle is really unwanted forced perspective.

Consider: If I take a pic of my dogs nose at the closest focusing distance of my camera -- about a foot. Then his nose is 1 foot away, and is feet are 3 feet away. Something 3 times as far a way looks to be 1/3 of the size.

This form of perspective is present whenever we have objects at varying distances from the camera.

Most of the time there are a series of things between near and far objects, so we make sense of it. Or there is an obvious transition point where your mind puts spare distance, according to other visual clues. You notice it particularly when the two subjects are arranged in a way that there is no clear depth cues as to relative distance, or the 'easiest' interpretation makes one of the objects too large.

As examples, look at the sets used for the interiors for Lord of the Rings.

Barrel and pincushion are a result of design decisions when making the lens. The magnification changes as you get further off axis.

When I was a pup, These two forms of distortion were of great concern, as fixing it in the darkroom was essentially impossible. Now, it is straight forward to do in Lightroom or Photoshop.

Not the answer you're looking for? Browse other questions tagged optics distortion or ask your own question.