How is the focus distance of a Leica M rangefinder lens mechanically transmitted to the body?

Basically speaking, when a camera focuses on something, it focuses on a certain distance. That means everything that is this distance away from the camera will be in focus and sharp in the image.

There are several ways to detect if a part of an image is in focus or not. One being to actually measure the distance. A way to do this is triangulation, i.e. to look at an object from two different positions and figure out the distance depending on the angles.

As far as I can tell, this is how a leica rangefinder works. Hence the name "rangefinder", which is the general term for a device that measures distance via triangulation.

The method described above is implemented in a somewhat indirect way in the camera. That's because knowing the two angles of the two points of view isn't very practical. In reality, one turns a focus dial on the lens that has a distance scale.

The triangulation happens in the camera body. That means the distance that the lens is focusing at somehow has to be transmitted into the body. How is that done?

I found this illustration:

It shows the two mirrors in the camera, which are the two points of view for the triangulation. The right mirror can be set to an angle, to set the mechanism to a different distance. The angle depends on a lever. At the end of the lever, there's a bearing or round shaped disk that rides on the rim of the lens barrel.

Is this how the two are connected? It looks like when one turns the focus ring of the lens to a greater distance, the barrel moves into the camera further, pushing the bearing/disk to the back and in turn rotating the right mirror/prism to the right (clockwise, if viewed from the top), bringing both arrows in the picture closer to being parallel, which would be the setting for infinity.

Long story short, here's my question: On what back-end barrel of the lens is this lever actually riding?

Take a look at the bottom of this Summilux-M 50mm f/1.4 ASPH 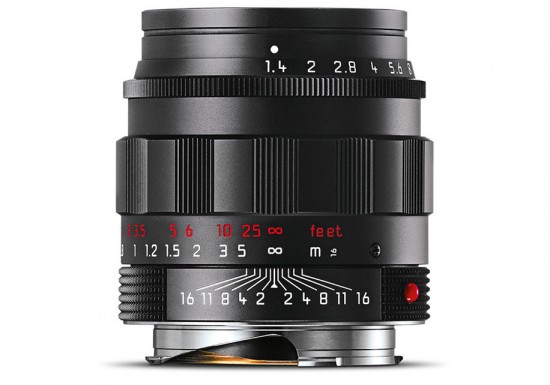 and this Summicron-M 35mm f/2 ASPH 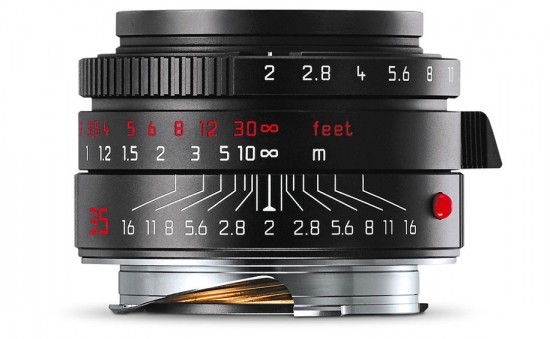 Both have this slope there. A slope would be a really simple way to transform the rotation of the barrel into the back and forth motion of the lever. But the slope looks wrong for two reasons:

The illustration above suggests that the whole barrel move in and out of the camera and that it is threaded. The thread would server the same purpose as the slope: transform rotation into translation. As far as the images go, there are brass colored parts visible, which look like they have some sort of thread on the outside, similar to what can be seen in the illustration.

Is this the missing link that connects lens focus ring with camera rangefinder? The illustration is very old and the lenses shown are very new, but I don't think they ever changed the mechanism. It's hard to tell from images how it works exactly and a Leica is nothing one comes across very often.

It looks to me like the turning action of the focus ring (from infinity to close) causes the gold coloured inner ring to move forwards with the lens arrangement.

As can be seen in the link provided by 2012rcampion in a comment: 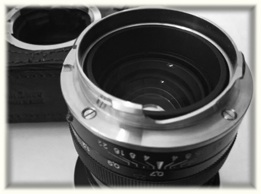 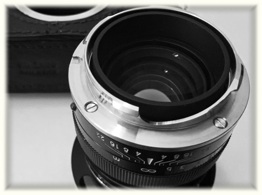 Looking now at the diagram this allows the small arm which pushes on the back of this to move forwards, presumably the triangular cutout on the mount is to accommodate this arm.

This action, in turn allows the longer spring-loaded "prism arm" to move, tilting the prism to the left (anti-clockwise from above) thereby aligning the 2 images in the viewfinder at a closer point.

Not the answer you're looking for? Browse other questions tagged manual-focus lens-mount rangefinder leica or ask your own question.

5
Mounting a Canon EF lens on a Leica M body?
4
Is it possible to DIY adjust the focus ring distance scale of a lens?
2
How does manual focus work using Leica lenses on other mirrorless cameras such as Fuji XPro1?
1
What is this lever for on the lens mount? (F-mount, not aperture lever)
2
How would I be able to properly calibrate the Kalart Rangefinder on a Speed Graphic?
0
Understanding focus distance of Nikon f/1.8D lens with D5600 Camera
1
Which kinds of lenses can be mounted on or adapted to the Leica M-Mount?
1
How to use rangefinder cameras with small viewfinders, while wearing glasses?
5
Rangefinder focus shadow discrepancy
0
How do sensors "focus" on the bottom of the lens (flange distance)?