Why do my prints darken too quickly in the developer tray?

I'm playing with a pinhole camera recently.¹ It's the first time I'm actually developing photos myself.

On my developer bottle it says I should use 1 unit of it and mix it with 9 units of water. Also, I've read online that I should keep the paper in the developer tray for at least 1 minute.

But when I actually put exposed paper into a tray with this developer, after like 3-5 seconds (usually), it starts to darken really fast. So fast I need to remove it from the tray ~2-3 seconds later.

Is that statement correct? If so, would that mean that if I'd put paper in developer for like 10 minutes, I wouldn't get black paper, just an extremely contrasty image?

The image contrast is changing so fast, I'm having trouble removing it from the tray on time. I tried to mix developer with water in 1+13 proportion, to make it weaker, but it's still too fast. How do I control the contrast of the resulting image? Should I try even weaker mixture, or it doesn't matter? Or maybe I'm just taking overexposed photographs?

One sample photo — exposed for around 60 seconds, on a cloudy day at 4 PM. I kept it in a developer solution for around 15 seconds at most: 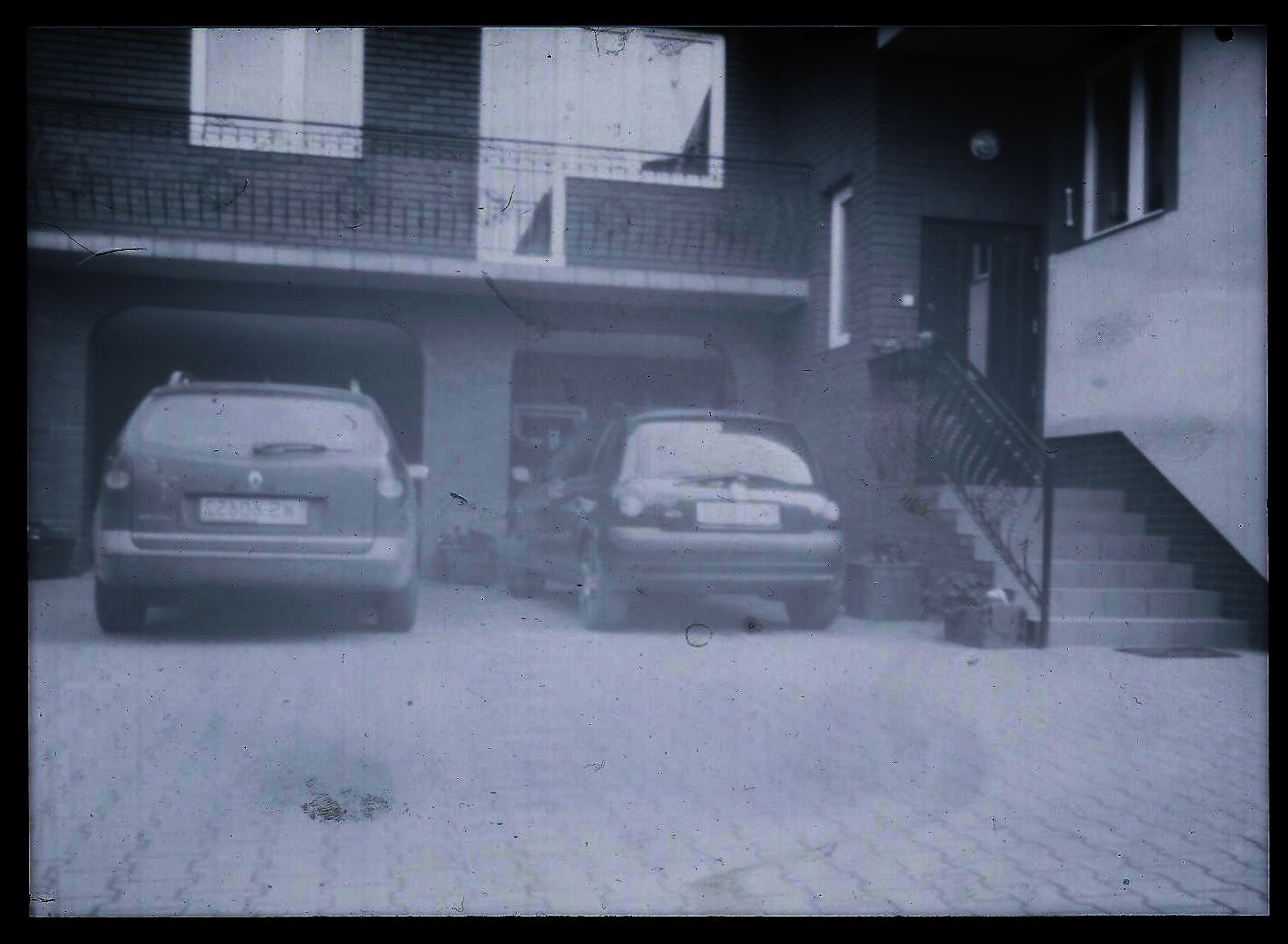 (1) - I built it from the shoe box where on one end there's a small hole, and on the other paper (which I glue for the time of taking a picture, and then unglue when developing)

The process you're dealing with one where that light from your subject strikes the paper and causes a reaction in the emulsion on the paper, then the developer reacts with the emulsion in the paper to turn it black. How long that process takes is a function of three things:

Normally when you're doing printing at an enlarger, you'd put a strip of paper on the easel, make a graduated exposure, develop it, pick the graduation that gave the best results and then make the print on a full sheet. Since you don't have that option with your pinhole prints, you'll need to adjust exposure time (the one variable you can control) to find what works with the nominal developer temperature and dilution.

The time your paper is taking to react says it's seeing far too much light. I'd start by cutting the exposure down from 60 seconds to as little as 15 or 20.

The simple answer is to reduce the exposure, but the reality may not be that simple.

You didn't say what paper or developer you are using. What bothers me most about the simple answer is that it appears you are using positive paper, and the rules for positive paper are rather different. Keep in mind that positive paper will be all black after developing when not exposed at all. If you are getting black very quickly, then you need to increase exposure.

From the resolution exhibited by your photo, the description of your camera being shoebox-sized, and 30 second exposure, I expect you are grossly underexposing. Papers are not that sensitive (low ISO number equivalent), because they are meant to be exposed in a controlled situation where a decent amount of light can be applied, and a few seconds to tens of seconds of exposure is actually desirable. The much more common negative B&W papers I used long ago would typically require 10-20 seconds of exposure with a typical enlarger at a mid-range f-stop of the lens. Yes, I know this isn't scientific, but your f/300 or so pinhole is going to let in a lot less light than than, even accounting for daylight illumination.

Personally I'd tweak and calibrate the process on negative paper since it's easier to work with, not to mention cheaper and more available. If you're going to scan the results anyway, then you can use a negative direcly.

You now say you are using negative paper, and the picture you show is a digitally inverted scan.

If the paper is turning dark quickly in the developer, then it is overexposed. Try exposing for a shorter time. With papers you usually calibrate the process with trial and error. Take a sequence of pictures each a factor of 2 exposure from the next to find the right exposure. Once you've done that test, you will have a much better idea how to expose subsequent shots.

Another possibility is that light is getting into your shoe box. This is also something you should test at least once. Do all the same things you do for a real exposure, including mounting the paper in the box, sealing the box, bringing it outside on the tripod, etc. The only difference is that you don't actually open the shutter during the exposure time. Otherwise handle everything else just like a real exposure. The paper should stay white in development, even after a minute. If it doesn't, you have a light leak in your shoe box. The pattern of darkness on the paper will then give you some clue as to where the light leak is.

2
Developing pinhole camera photos - pictures turn cloudy
3
What is the black silt in bottom of my film developer?
0
Photo paper remains blank after exposure and development
3
What process should I use for developing old (Ferrania?) CR50?
5
Uneven tank development
1
How many rolls can be processed with ILFORD powder developers at various dilutions?
0
How to clean glue or adhesive from film?
0
One transparent negative when developing 2 rolls at once
4
Increasing contrast in a darkroom print?
7
Cannot get true blacks with my enlarger