What are the RGB primaries in a camera? 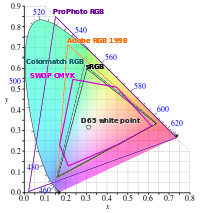 I'm wondering if the reason Lightroom now uses ProPhoto is because the primaries (and thus the native gamut) are outside of AdobeRGB? Since cameras started offering AdobeRGB for the in-camera Jpeg, I surmise that it's significantly larger than sRGB. Just how does a filter (on the pixel) map to a point on the diagram? Would it move interier to the pure hue perimeter, or what is the effect of the bandwidth in the filter? If it has no trouble detecting 520nm green, that puts it outside any rgb space; or, if the response of the sensor (behind the filter) describes a circle around the primary, the gamut is not a triangle limited to the interior of the hull connecting the primaries, as with output using primaries.

Digital cameras and films to do not have "primaries". The spectral sensitives of digital cameras and films dictate their response to various wavelengths of light. These native responses are sometimes encoded relative to a set of encoding primaries such as rec709, adobeRGB, Kodak ProPhoto (aka RIMM/ROMM), or ACES but these encoding primaries have nothing to do with the camera's ability to sense light of any given wavelength.

Typically the RGB values found in a RAW camera file are those responses dictated by the camera's spectral sensitivities. These are often transformed into CIEXYZ then an encoding RGB space such as those described above based on careful characterization of the camera's response to known spectral stimuli.

The reason that Adobe Camera RAW and Lightroom use RIMM/ROMM as an internal encoding space is due to its nature as a good space for doing tone curve application. See http://www.photo-lovers.org/pdf/color/romm.pdf

If a camera had a set of primaries it would form a gamut in a colorimetric space such as CIE xy, CIE u'v', or CIELAB. That would imply the camera were not able to capture colorimetric values outside those gamut volumes. Clearly this isn't the case. The term "Gamut" is an output device specific term that relates to an output device's ability to reproduce a specific set of colors.

Note : The term "Capture Color Analysis Gamuts" was introduced by Jack Holm, formerly of HP. While the concept Holm introduces in this paper is useful for understanding and comparing camera spectral sensitivities, it is not a "Gamut" in the traditional sense.

I found this page which includes the illustration: 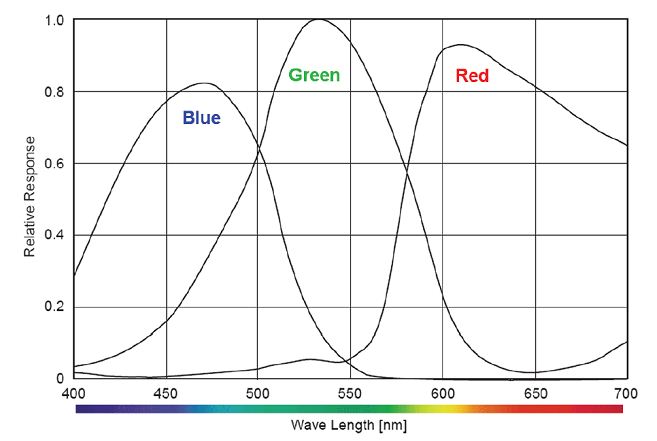 It reminds me of how the human eye works, which I'm sure is not a coincidence.

The similarity is that the difference in red and green spans most of it, with blue breaking the tie by picking out the left side. The green right slope comes down around 630 and blue picks out the half left of the green peak.

The striking differences are that the red is highly smashed on the left side, and green picks up again requiring red to break the tie.

A being with eyes like this would not have a hue circle that joins red and blue blending together. It would perceive red and green as a cycle with red blending smoothly into green, which is meerly desaturated to us.

Clearly any pure spectral color has a unique tristimulus. But desaturated colors come out different and there are different metamers for odd illumination spectra and/or pigments that are not broad flat curves.

That would explain why non-thermal lighting can give results that are not a simple adjustment away from fixing. Reading for red higher than green and no blue could be slighly desaturated yellow at one brigntness, or vivid red at a lower brightness. It must make assumptions based on illumination spectra and maybe other clues in the content?

The output from the sensor is RGB based, so if interpreted simply as three primaries its gamut would be triangle shaped as you are familiar with for other RGB gamuts.

Of course as you allude to each of the three colour filters in the sensor will not only represent a single wavelength but a curve, so for accuracy a colour profile needs not just primaries but a colour look-up table.

The colour responses vary greatly between cameras, enough that you need an input profile specifically for the camera. Your RAW conversion software will have input profiles from major cameras built-in and may even have a mechanism for automatically downloading new ones. In some cases it may not have a full profile but instead just have a matrix (eg just a linear conversion from primaries to CIE XYZ) and work from that, with less accuracy. And if you don't have a camera specific profile or matrix, the colours are likely to look wrong.

I'm wondering if the reason Lightroom now uses ProPhoto is because the primaries (and thus the native gamut) are outside of AdobeRGB?

Yes, a lot of cameras extend outside of AdobeRGB, but that's not the only reason for ProPhotoRGB.

ProPhotoRGB is seen as a good default/universal "working" colour space. The thing about a working colour space is that you apply filters to image data after it's pulled from the camera, that may even further boost colour saturation or shift colours around, so from that point on the gamut from the camera sensor's output is irrelevant, and you want something that is big and generic enough to represent any colours you're creating so you don't have to worry about colour clipping even if you do something crazy like boost saturation a lot then reduce it again. In short ProPhotoRGB gives you breathing room as a "working" colour space but your image will of course be reduced back down to an output colour profile for viewing on screen or exporting (unless of course you're keeping the wide gamut when exporting).

Conversion between these colour spaces requires the sort of mathematics you'd do in the first year of a math degree, suffice to say that most conversions from colour space A to colour space B go from A to CIE XYZ first, then from CIE XYZ to B. CIE XYZ isn't practical to use as a working colour space itself due to its inefficiency and that applying filters is simpler in an RGB domain or a domain based on luminance.

I don't know how well I've answered your questions.

Not the answer you're looking for? Browse other questions tagged sensor color-spaces adobe-rgb rgb or ask your own question.

17
Are RGB numeric values equal to CMYK percentages?
33
What's the difference between Adobe RGB and sRGB and which should I set in my camera?
29
Does the selection of sRGB or Adobe RGB in camera when shooting RAW ever matter?
6
Adobe RGB to sRGB conversion, why does the color change?
1
When to use LUV and not RGB colourspaces
0
Does saving a file in Prophoto RGB increase filesize?
0
How to do batch conversion from Adobe RGB to Srgb
1
Humanae pantone colors to RGB conversion
1
Standard color space more vivid than Adobe RGB in Dell DELL UP2516D?
17
Why is CMYK more efficient/beneficial than RGB for performing printing operation on white paper?