I had a Nikon 7100 and a 70-300mm lens. Upgraded to a Nikon d750, and want to upgrade my lens to one that will allow me to take photos at comparable distances. (Going full frame decreases my effective "reach".) I bought the 24-120mm 1:4G ED, but that won't work for wildlife. And although technically my old 70-300mm "works" on the d750, it seems so much less effective. Suggestions?

If you're willing to go third party the latest offerings from Sigma and Tamron are much better than their older counterparts. The Tamron 150-600mm f/5-6.3 is well-liked by several of my friends who shoot birds in bright daylight.

When you took the photo with a 300mm length, it got cropped on a crop sensor. You didn't actually get a 450mm photo, but still a 300mm cropped photo.

With full frame, it will still take the same photo but without any cropping. If you crop it in photoshop then you will get the exact same photo as your crop camera... you are basically not missing out on any details with full frame.

Somewhat ironic, but the FX 750 will get you less resolution over the same area. Even with my 16MP DX D7000 that I owned previous, I got more pixels per square inch at the same focal length than with my D750.

You still get the full 24-megapixels for a longer reach, and the 2nd body is still cheaper than a longer full-frame telephoto lens.

I have a D610 and I'm beginning to realize this.

If you shoot in crop mode on the D610, or just crop in post, you won't have any less detail in the final image than you would have had on the D7100. You'll have slightly fewer megapixels, but the lens simply isn't sharp enough for those megapixels to matter.

See below the perceptual mexapixel map for the 70-300 mounted on the D7100 vs the D610. It's immediately clear that, especially at the long end, the sharpness just falls right off.

You get more apparent reach with the D7100, but because of the smaller sensor you are blowing up the imperfections in the lens and sampling them at a locally higher resolution. The weaknesses of FX lenses on DX bodies are "magnified" (ie: sampled at higher resolution), in a sense, along with the rest of the image.

In the meantime, save up for a Tamron 150-600 (as Michael Clark suggested) - if you like to shoot wildlife and don't have a huge budget, this is probably the lens you'll want next. 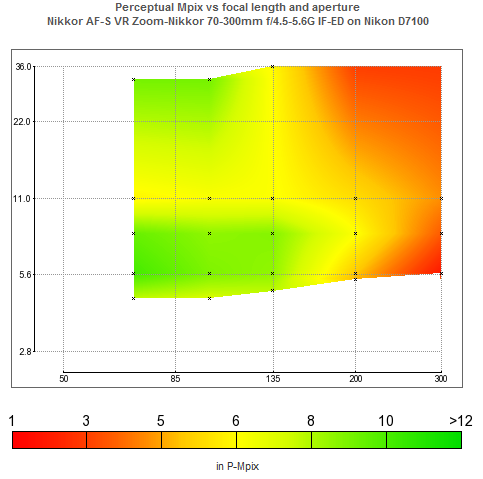 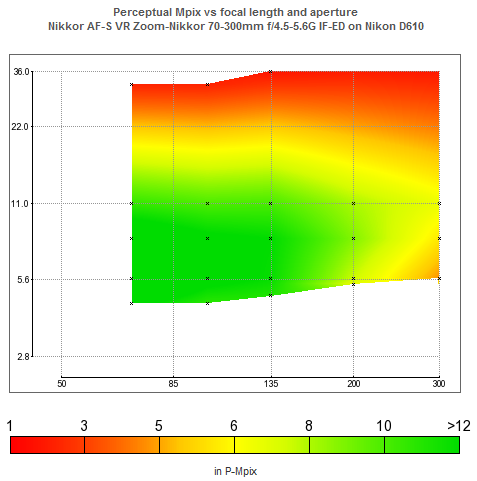 Not the answer you're looking for? Browse other questions tagged nikon telephoto full-frame lens-recommendation wildlife or ask your own question.