How to take photos with the same aesthetic of the attatched photo? [closed] 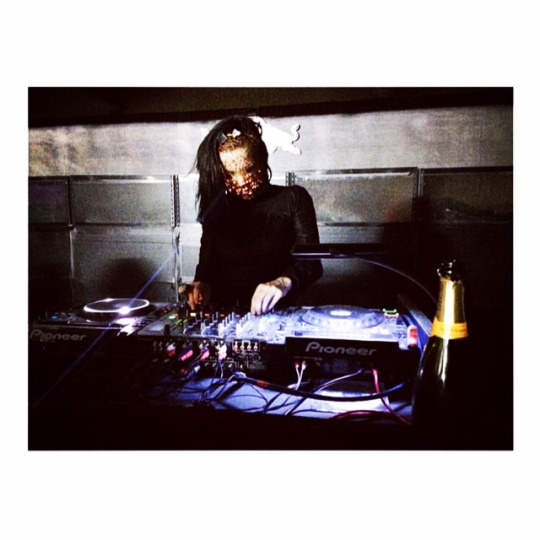 How can I go about taking photos like this one? I'm have no photography background but would like to get into it. I absolutely love the colors in this along with the grain and whole vibe of the photo. Is it film or digital, what camera can produce this quality, flashes, necessary stuff to do photography like this.

Looking at the picture:

A very basic camera like a phone or compact would be able to do it with maybe the risk that they focus the picture correctly and end up too sharp. You may also lack iso control on the most basic gear and you may fail to bump up iso enough to get the noisy rendering you want.

For the overall colors tones you need a post processing software that will allow you to change the tone and colors rendering of the photo. Great ones would lightroom + the proper pluging or DxO + DxO Filmpack but I'am sure you could do that with much more basic software. Maybe instagram or something like that would do the trick. Be sure you disable all feature to remove noise then or your picture would look too clean.

Apart from being blurry and noisy, this image also has a high contrast. Its contrast curve is steep enough that its contrast was probably boosted later, for example in Photoshop.

To achieve this effect in photoshop, duplicate the current layer and set the top layer's blend mode to "Soft light". You can repeat this multiple times for even greater effect or reduce the effect by lowering the top layer's opacity.

You may also need to slightly lower the color saturation.

Not the answer you're looking for? Browse other questions tagged film digital or ask your own question.

12
How to preserve detail when downscaling scanned photos?
6
How can I colorize a black and white photo using colors from a similar photo?
4
Best approach to handle flash with my film camera?
2
Can you reprint photos off a roll of film?
3
How can I emulate 50's and 60's aircraft photos using film today?
1
How did digital camera take a partially black and white photo?
3
How do I take indoor photographs in dark lit rooms?
1
What kind of old 35mm point and shoot do I need to take photographs in the style of Gunnar Stahl?
1
Why are my Portra 400 pictures darker than Portra 160? Shouldn't higher ISO result in brighter pictures?