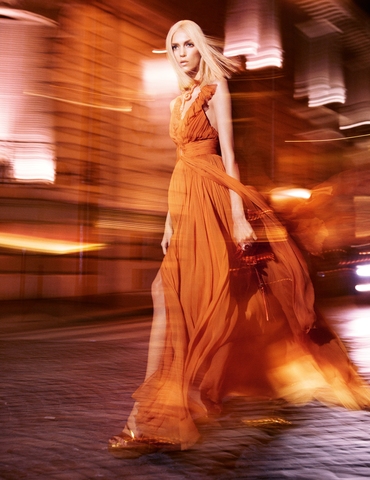 Use a flash with rear curtain sync and a long shutter speed.

The long shutter blurs the background and the subject.

However, at the end of the exposure, the rear curtain synced flash fires, which essentially adds a second exposure on top. The flash is significantly brighter compared to the ambient light, but due to its limited reach, it only hits the subject, not the background. (mostly) The so far accumulated blurry exposure of the subject is overpowered by the flash exposure, which is clear, because it is so short.

The flash is high above to the left of the camera, which you can tell from two things:

This is a nice creative technique. I have mixed feelings about using it for a vogue shot. Sure, it all looks artsy and creative, but being a product shot (I'm talking about the dress!) it doesn't work so well for me. The dress mixes with the background, it is blurry, it is not entirely visible... Imagine a BMW ad that only shows the rear lights of their new car disappearing in a dust cloud that the car leaves behind. Sure, that all could be (and very likely is) all intentional, but I'd rather see the dress more clearly, more from the front. What I'm trying to say is that you should not overdo this.

2
How to have motion blur only behind the subject?
1
Tips for creating background motion blur images?

40
Focus problem vs. motion blur vs. camera shake - how to tell the difference?
4
How does one track a shot where a car moves towards the camera but the background is blurred?
6
How can I get a clear subject with motion-blurred (traffic trails) background?
9
How to achieve sharp foreground with a motion blurred background?
6
How is the circular motion blur created in this Instagram image?
0
How can I capture motion while maintaining the sharpness of the main subject with an iPhone?
2
How to have motion blur only behind the subject?