What lenses can produce a clean starburst effect?

I have seen several examples of a beautiful lens effect, naturally due to a stopped down aperture, but not like a lens star I have managed to create myself - it is so clean. Here is an example:

What specific lens(es) are able to produce such a clean star effect? I am envious. 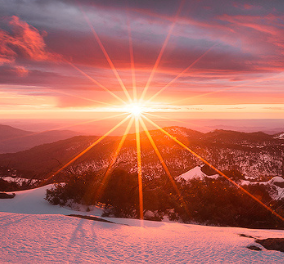 There are 14 points to the star. This points to one specific option of doing it in camera. The lens has 7 blades.

The diffraction spikes formed by the lens form at two spots for each blade, one major one and one minor one 180 degrees from the major one. You will notice that every other star point is shorter than its neighbors. As I said, this points to a 7 bladed lens aperture.

You will often see 6 (which only shows 6 points), 14 (from 7) and 8 (from 8) though more exist. Lenses that don't try to have a circular aperture (rounded blades) will produce a more pronounced star effect.

Given this, I doubt it was done post processing. Possible, but as I said, I doubt it.

Its also possible to force the effect with a star filter. These are filters that have been scored with lines that will cause similar patterns similar to the diffraction spikes from point light sources (its on everything, but tends not to be as noticeable though it does reduce the sharpness in the rest of the image - you'll frequently see it used in night photographs).

For example, the Tiffen Star filters come in a variety of points and arrangement of points. It all depends on how the filter was scored. They are also sometimes called 'cross screens'. B&H has an entire category for its star filters.

This is fake. The EF 16-35 has nine rounded blades and this burst is indicative of a 7 blade straight lens. So either the EXIF data is wrong or the burst is fake, take your pick.

Not the answer you're looking for? Browse other questions tagged lens aperture effect starbursts or ask your own question.

2
Why 1 sunbeam for each aperture blade in your lens?

16
Why isn't my variable-aperture photo more interesting?
18
What type of cloth is safe to clean lenses?
4
Can I use spectacle cleaning wipes to clean camera lenses?
5
What Micro-Four Thirds prime lenses produce pleasing bokeh?
4
Can Focus Stacking produce the same effect as Tilt-Shift?
2
What is the DIY repair potential of a Sigma 24-70mm f2.8 EX DG Macro (non HSM) lens?
1
You have two rooms to build your photography skills, measuring about 12 x 12 feet and 9 x 8.8 feet. What lens/lenses would you buy and why?
0
Nikon Lens - Stopping down causes over exposure in Aperture Priority mode
3
How can I mimic this solarization effect?
3
What kind of effect could I use to get this skin/beard black&white swirling effect?