How can I identify duplicate image files?

Over the years, I've accumulated a lot of pictures, across a bunch of different machines.

I think I've mostly kept them in a yyyy/mm/ directory structure, but especially with some of the older pictures, there seem to be a lot of duplicates.

What's the best way to identify the duplicates? Are there good tools to do this, or am I going to have to write something on my own?

A number of programs can find duplicates based on image contents. Some asset management apps will do it and there are also dedicated programs. If you Google 'detect duplicate images' you'll see quite a few options. See which ones are available for your platform.

Another solution is to simply import the files with the 'ignore duplicate option'. Picasa, which is free, can do it.

There's a few versions of dupeGuru (standard, music & picture editions), and the picture edition allows you to find visually similar images via a bitmap blocking comparison algorithm, among other methods (like EXIF original image timestamp, or the files being simply identical).

It has a variety of other useful features like excluded folders, support for iPhoto/Aperture libraries, and considerable customisation of how it detects duplicates and what it does with them.

For Linux, try FSlint. It's a bit slow, but it will definitely find duplicates.

Picasa has a duplicate file finder but it's hard to tell what you are looking at: Run Picasa; click Tools > Experimental > Show Duplicate Files. It works but be careful about what you are deleting.

Another option is the free "Fast Duplicate File Finder":

What I liked about this is it allows to you preview the picture before deciding you don't need the duplicate. 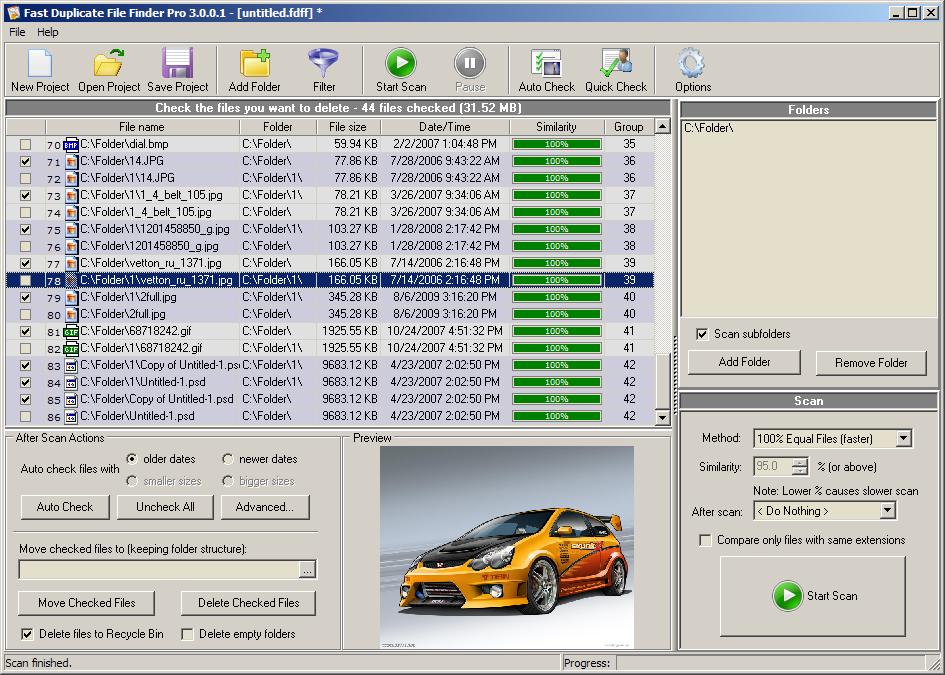 That works fine as long as the files are identical, but if you are looking for similar photos (e.g. same photo but resized, rotated, or manipulated), you may want to look into their upgraded version:

I haven't used this program but I used a very similar program (no longer made) and I found it very useful. They have a free download so it might be worth checking out.

digikam (linux, windows and mac) has a sidebar titled versions

and another titled search

Quick Search is the adaptive search box at the top of the search dialog (Left Sidebar) and provides you with a simple means to search the digiKam database with a single query. You can enter any arguments in the Search: text field and it will be used to determine the results. For instance, you can enter the string 'birthday' to search the complete database for occurrences of the word 'birthday' in all metadata text fields, or '05.png' to search for a specific image file name '05.png' (no escaping as in regexpressions needed).

(It also has an advanced setting allowing multiple boolean searches)

and another titled fuzzy

digiKam characterizes every image by a lengthy number using a special technique (Haar algorithm) that makes it possible to compare images by comparing this calculated signature. The less numerical difference there is between any two image signatures, the more they resemble each other. This technique has three implementations in digiKam:...

Though the generation of the "signature's" and cross checking of them on a large number of images can be a slow process. Also be aware that some people are not fans because it is a KDE project that doesn't integrate totally with other desktop environments and it tries to be an all in one application with image download, catalogue / keywording, RAW development, image maniplation and more included.

Similar.pictures is an online program to find near and exact duplicates.

I wrote it because Picasa used to rather find exact copies. And now Picasa is gone.

My two cents. I have used:

One thing to consider is the "fuzziness" of the search. Sometimes the program finds similar photos, for example, variations of the same photoshoot. Don't have a happy trigger when deleting your images.

Please, backup your images before deleting anything.

Acdsee is a simple/popular photo browsing app that has this feature (Tools -> Find duplicates).

On my Mac, I've had excellent success with PhotoSweeper (http://overmacs.com/). It can work directly through the file system or via popular photography software such as Apple Photos and Adobe Lightroom. It is able to find either exact duplicates or similar image files. And at $10, it's a steal.

I'd recommend the upcoming version of XYplorer (File Manager). It will let you sort photos by visual similarity. 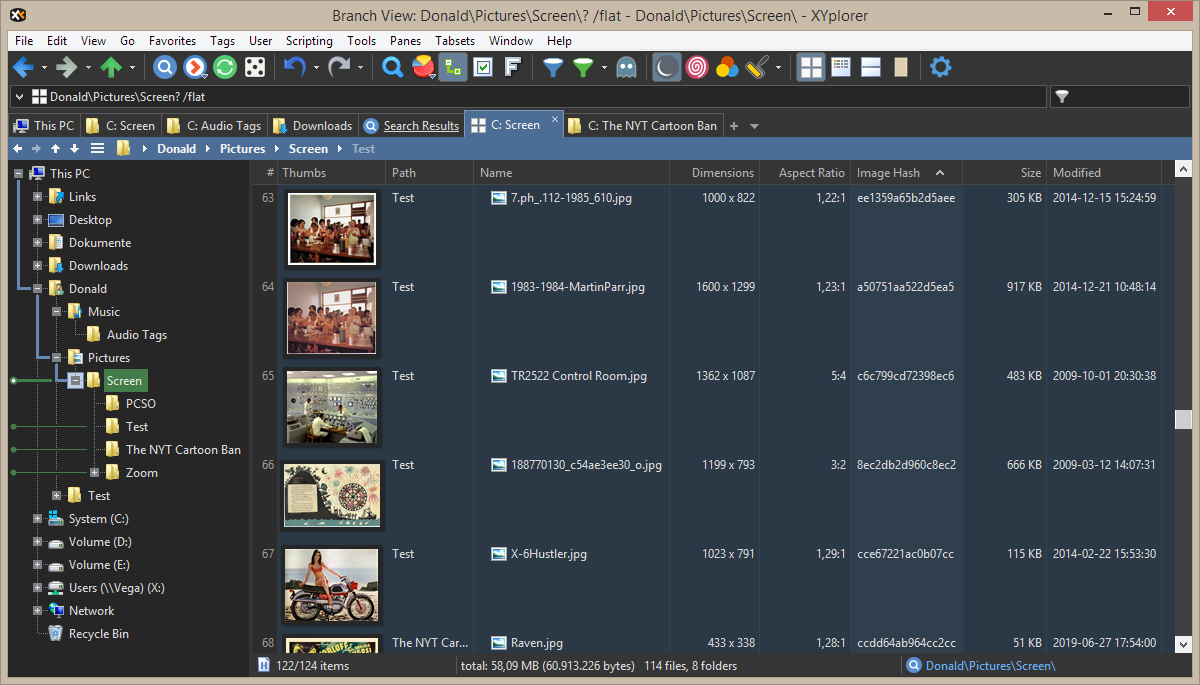 Thank you @rober-carntanio! Try also this one: Duplicate Photo Finder

Works both for similar and duplicate images.

DeDup-Image is a bash script to automatically find and delete identical images / duplicate photos, even if the metadata differs. It always retains the largest copy, which probably contains the most metadata and deletes all other found objects based on the SHA256-HASH of the real image information without any metadata. Because the script needs to process a variant from each image without metadata, it's a bit slower and processor-intensive than programs or scripts that can only search for completely identical files.

Not the answer you're looking for? Browse other questions tagged photo-management duplicates or ask your own question.

2
Consolidate photos and eliminate duplicates?
0
How can I detect if two files are actually the same image?
1
How can I sort pictures in a folder based on similarity?
0
How to deduplicate and centralize pictures from multiple cameras?
16
How do you manage images with duplicate file names in Lightroom?
2
Photo recovery and duplicate removal
1
Looking for a fuzzy image comparison tool (not online, but for harddrive search)

31
Can anyone recommend a good open-source photo management platforms for power users?
9
How can I manage my raw+jpeg files?
16
How can I find duplicate photos in a very large pool of data (tens to hundreds of gigs)?
2
How can I easily remove duplicate images from multiple stacks?
7
Why is my DSLR taking duplicate pictures?
2
Is there a software tool to detect and delete image derivatives?
0
Does Nikon assign a duplicate photo the same filename?
2
Photo recovery and duplicate removal
2
Should I care about duplicates with different metadata?