Apple Aperture has a function "Show Focus Points". When I am using it with raw files from Canon 500D, it displays the pattern of focus points (just like the camera viewfinder) and highlights some of them.

However, the results did not seem to match the reality; there were some red rectangles, but they seemed to be in the wrong places. And then I had a bit closer look at the display and realised that there are (at least) four different kinds of rectangles:

What do these different symbols mean? Not all of them are visible in all photos, but I was able to find photos that actually had all four types of rectangles.

I would guess that one of the following explanations is close to the reality:

But what do the colours mean, then?

Edit: Here is a quick test shot that shows what I see. I had set the camera to automatically select the AF points. According to the flashing lights in the viewfinder, the camera selected the center point (= thick red) and the lower right point (= thick white). But then why is the rightmost AF point shown as a red box? 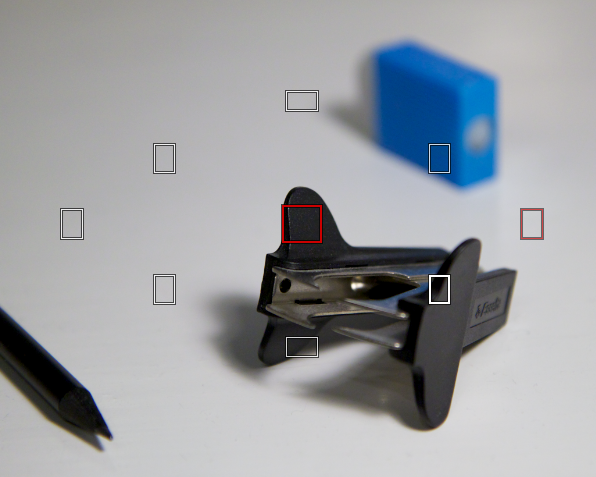 While there is not a lot of information out there on this (and thus it is possible it is actually expected behavior), all official Apple sources describe the behavior of the "Show Focus Points" feature working as LudoMC describes in his answer, and nowhere can I find any reference to the feature working in any way like you're experiencing it. Based on that, and on forum posts elsewhere on the internet, such as this post over on dpreview.com:

I suspect that what you're experiencing may actually be an Aperture 3 bug related to the Canon 550D model camera.

I've checked in both the Aperture help and in the Apple Aperture's Pro Book and there is no reference to focus points :-/

On my side, as I'm only using a manually selected single focus point, I've always seen a single red (thick) square which is my focus point. All others are thin white. See below: 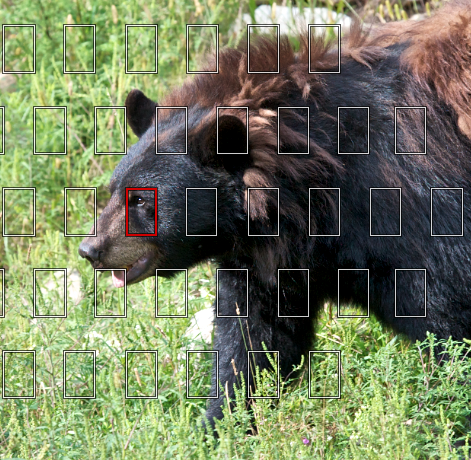 Could you show us a picture where you have the four types on the same picture to see the pattern and try to understand?

After messing around with some of my shots in Aperture, I think the meanings are highly camera-specific. For my 450D/Rebel XSi, they seem to mean:

In general, they seem to ascend in certainty — the bolder the frame, the more certain it was to have achieved focus at that point.

Interestingly, the majority of my S90 shots have a single frame, even where there should be multiple, such as when it detects two or more faces. Perhaps it doesn’t record this when shooting RAW, or Aperture doesn’t understand how to pull that from RAW vs. the JPEGs shot by my earlier ELPHs.

Not the answer you're looking for? Browse other questions tagged post-processing apple-aperture canon-500d or ask your own question.

5
Reducing chroma noise in Aperture
6
Batch RAW processing in Aperture 3?
4
How should one deal with 'hot' pixels on Canon T1i, either in-camera on in Aperture?
3
How can I tell precisely what is being adjusted with a preset in Apple Aperture?
2
Am I using Aperture "export versions" wrong?
3
Why doesn't Aperture show black as black?
4
Is there free software which can correct smudges etc caused by dust inside the camera?
5
How to set white balance in a photo of stars?
1
Why is Aperture 3.5.1 repeatedly crashing?
1
How to locate unreferenced image in Aperture?