What are the cons of a backpack-style camera bag?

I am on the hunt for a great camera bag. Since it will be home to my pride and joy equipment that I hope to one day (soon I hope) accumulate I need it to be well made, and protective of the gear first and foremost.

Next I need it to be usable and handy. To this end I was wondering if my intentions for aback-pack style bad is ok. I am skeptical because whenever I see photographers with camera bags they are always the hand held boxy type.

This may be coincidence and my perception only, or it may be a sign no one uses back pack style camera bags

Also since I have no idea what separates a great bag from the rest of the pack, some help pointing out thing I should look for would be great.

As I spend considerable time, up to 10 hours in a day, hiking around the rain forests of British Columbia as well as the streets and parks of Vancouver I use a backpack and definitely would not be without it. I find it very comfortable to wear and holds my D300 with 7 lenses, 2 flashes and a few ancillary pieces. The comfort of having a well made backpack with comfortable straps more than makes up for the slight inconvenience of removing it to change lens or access equipment.

When I chose my backpack I looked for the following items ...

ALL of these items were met with the Lowepro Primus AW and as a bonus it is made from recycled material :)

Last points to make are to spend considerable time trying packs on, take your gear and see how it fits, and don't settle for the first one you find ... this one was my third pack before I got the right one for me.

You can read about all the pros and cons of all bag types at the link below. Basically you must compromise size, weight, comfort and accessibility. No bag fits all uses. The more typical bag for photography is called a messenger bag. Here are the cons of backpacks:

Since I schlep around our city all day without a car, a backpack is my preferred way to carry camera gear. Sling bags and messenger bags, which go on one shoulder, can be tiring and make you feel lopsided after a while. I also prefer a design with separate compartment for non-camera items. This is particularly handy as a new dad -- you can put diapers and snacks and spare changes of clothes and whatever else in there.

The major downside is access to your camera equipment. I currently have a Crumpler "Sinking Barge", which has a gusseted lower compartment for camera stuff -- this opens for easy access but won't spill everything out. You can kind of swing it around on one arm to do this without taking the bag off, but it's a pain.

The other downside is that a bag which will also include room for a laptop is usually unfortunately large, and can be unwieldy on a train or bus. The Crumpler is super-well made and very comfortable to wear, but it's huge -- and the model I have is the smaller one in its line.

Smaller backpacks exist, though. Before I had a larger laptop, I used a Tamrac Express Pack 8, and a shoved my Sony Vaio U101 into the top. Much more compact, and I still take that out when I don't need my laptop. It's small, but I can fit my Pentax K-7 with an attached prime lens and two other small primes into the camera compartment, and a flash and even a collapsible reflector into the top. The access is definitely weird because of the flap pocket, but on the other hand that would provide some protection against theft if that's a big concern.

For me, the biggest con to owning a backpack is that I can't hold as much stuff as I can with a 'standard format' square camera bag or camera case. Of course the flip side pro is that it's generally more portable than a square bag or hardshell case. For me I eventually ended up with a backpack, a square softshell bag, AND a hardshell case... Depending on what I am going to do, each have their place.

After debating this question with myself for several weeks I finally settled on the Lowepro Flipside backpack. With this model the opening is against your back and is accessed by spinning the bag around to your front with the waist-belt buckled.

For the three months I've had it I've been very pleased and I absolutely love hiking with the weight on both shoulders. My big fear when looking at backpacks was that I would be forced to set the whole shebang down in the dirt when changing lenses. The Flipside solves that problem admirably.

I recently bought the Kata R-103 backpack. So far, I am very content with it. What is especially nice is that you can access your camera without taking the entire backpack off: 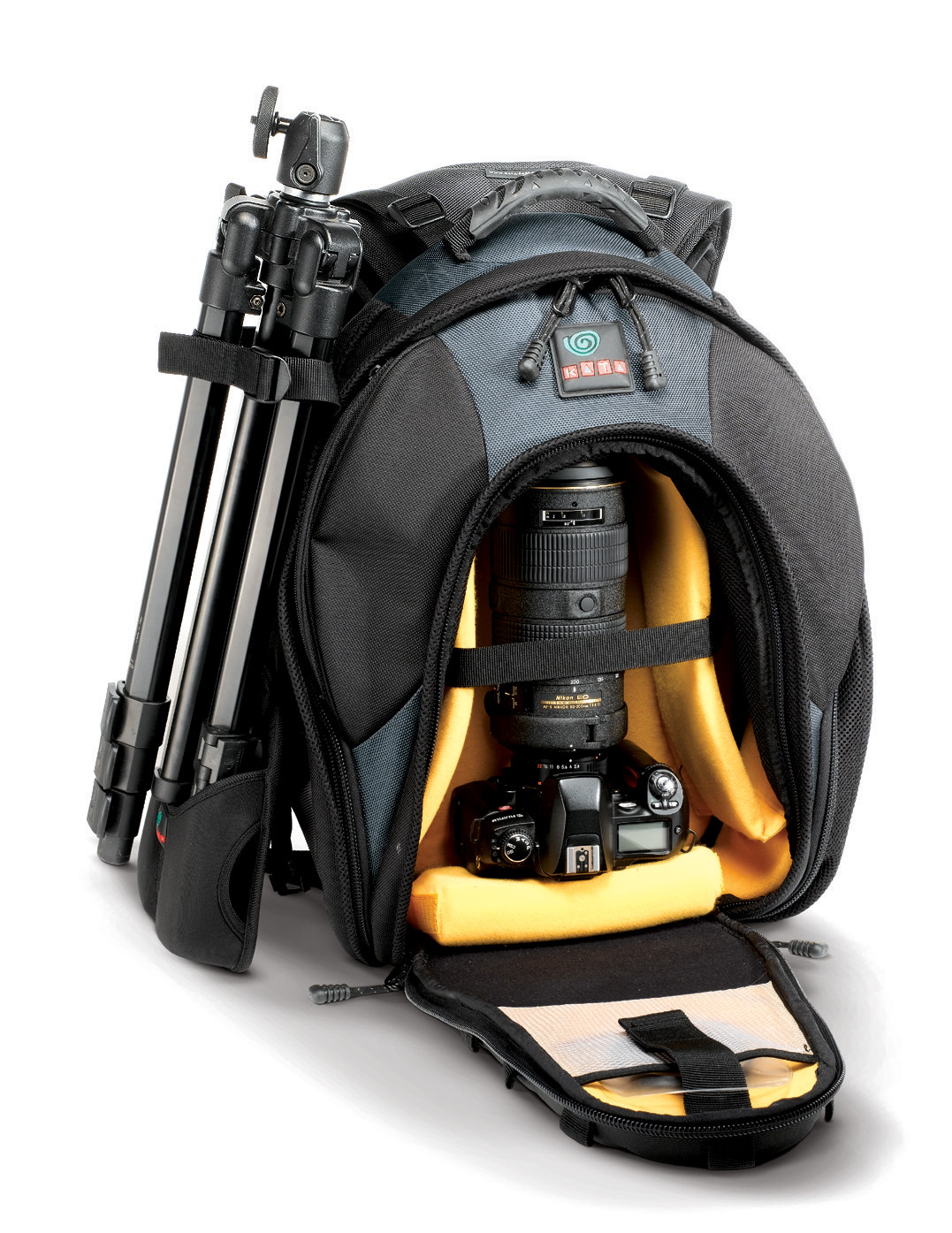 I think this gains out the biggest disadvantage of regular photo backpacks - hard accessibility.

But that's not the only good thing about this bag. Just have a look at the Amazon reviews. It is extremely stable and allows you to carry a laptop and tripod as well as the camera equipment.

I use a nice everyday backpack, and keep my camera wrapped in a tshirt as far up in the backpack as I can. This particular backpack (a Haglöfs, a swedish brand) opens from the side, which means I can open it and remove my gear without taking it off, which is nice. I suppose a real camera backpack would be even better, but I need to carry around everything else every day (no car, going to a university) so I haven't found any good camera bag yet.

8
How do I choose a camera bag?
4
Is there a camera bag that could serve as a diaper bag, or vice versa?
1
Is there a small camera backpack that can hold a tripod and four lenses?

33
What options are there for a camera bag that does not look like one?
12
Looking for a discreet camera bag
6
Tips on a non-backpack camera bag for body with lens attached and two subsequent lenses
0
Is the bag in the Manfrotto 7320YB M-Y Compact Tripod Kit with Ball Head/Backpack/Gear Bag bundle weather proof?
1
What kind of camera bag should I pick for traveling around the Alps?
4
Best camera case/backpack for caving?
22
What's the safest camera position in a camera bag?
1
Ribbons to secure lenses in a camera bag