Are Yongnuo flashes interchangeable between dslr's or are they brand specific?

I see the Yongnuo triggers are brand specific. For example YN-622c (for Canon) and the YN-622n (for Nikon)

I was looking at the YN-565 and YN-568 but did not want to make a wrong purchase and buy a Canon one as I have a Nikon.

If they're TTL-capable flashes, they're brand specific. And they only come in Canon and Nikon flavors. The manual-only models are not brand-specific and will work on any ISO-compatible hotshoe.

It's not a 100% reliable guide (e.g., the YN-500EX is an exception), but generally any model that ends in a 0 is manual-only and brand-agnostic; any model that doesn't end in 0 is probably TTL capable and may be Canon-only, or come in both Canon and Nikon flavors.

There are a lot of weird listings on Amazon/eBay for Yongnuo flashes that are the Canon version that also say they're TTL-compatible with Nikon cameras. My personal take is that these are listings by people who simply move lots of units of lots of cheap Chinese goods, and they don't actually know anything about flashes. And in a weird way, the iTTL-compatibility claim is true, because Yongnuo's "EX"-designated flashes can be used as CLS slaves in the Nikon optical wireless triggering system as well as Canon's wireless eTTL, but they won't work as an iTTL flash on a camera or TTL radio trigger hotshoe unless they have the Nikon pin placement on the foot.

Check the pins on the feet

The pins will always tell you what kind of flash you're dealing with. If there's a single pin to communicate the sync signal in the center of the foot, it's a manual-only flash and brand-agnostic. The TTL-capable, brand-specific models will have pins on the foot that match the hotshoe contact placement for the specific brand:

So, for example, as a Nikon shooter, you want a YN-568 with a foot that looks like this: 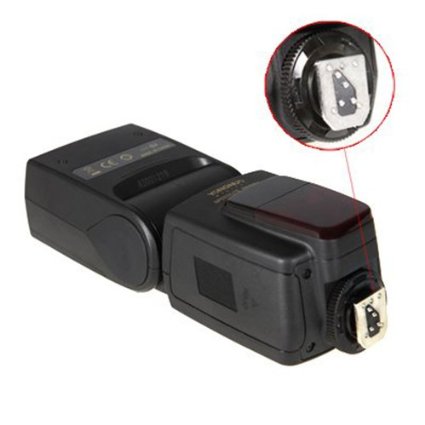 On the YN-622 triggers, you'll note that the same applies to the pins on the feet of those triggers, as well as the passthrough shoes up top.

With Yongnuo's manual triggers (RF-60x triggers), however, this only holds on the feet (they use a TTL signal for wake-up, but only for wake-up); the passthrough shoe on top has a modified contact placement that covers the wake-up signal in both patterns. This is why they don't do full TTL passthrough, but the YN-622s do.

I'm using 2 Yongnuos YN560 IV with all their settings on my Fuji xt 2 both as TTL and with Fuji flash as trigger.

Before used them with Nikon. Seems to me they aren't brand specific. Isn't the big pin on hot shoe all that matters? Might be wrong but I'm having fun with them flashing away through selected channels and chosen power output

These are FANTASTIC ... the ridiculous money I wasted on branded stupid fragile speed lites...

Not the answer you're looking for? Browse other questions tagged flash yongnuo or ask your own question.

20
What are the Yongnuo flash naming conventions?
3
Is flash brand X compatible with camera brand Y?
2
How can I tell if a 3rd-party flash is compatible with my camera?
3
Can I use any brand of flash?
3
Can a YN622C-TX control a YN560-IV's power/zoom?
2
Doesn't Yongnuo YN685 speedlight have different part numbers for Canon and Nikon?
0
Yongnuo YN568EX-ii compatible with YN560-TX controller
2
How can I set three flashes at different output levels with a camera with only two flash groups?
0
What external flash for a Nikon D3100?
0
What's the difference between Speedlite YN467 for Nikon and for Canon?
See more linked questions

2
Why are there no blinking red lights in slave mode with one of my Yongnuo flashes?
0
Which studio strobes are compatible with the Yongnuo YN-622C?
0
How can I fire two independent Yongnuo flashes when I snap a shot?
1
Can I trigger Yongnuo YN-622N and YN-622C together at the same time?
2
Doesn't Yongnuo YN685 speedlight have different part numbers for Canon and Nikon?
0
Buying Yongnuo flashes
1
Can I use a YN-E3-RT on the hotshoe of a YN-622C receiver?
5
Differences between Yongnuo flashes - 560, 568 and 685
1
Will Yongnuo YN685 (Nikon) on-camera trigger with YN622C off-camera?