I frequently take pictures for our Ping Pong activity, but I am a newbie at photography. My pictures are mostly result like the following(the ball is blurry). So I have few questions: 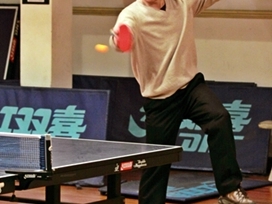 In addition to high shutter speed, you might also want to use flash to freeze motion. If you use a flash at the right power, with a shutter speed of 1/200th of a second, freezing a ping pong ball in motion should be a synch. The pulse of a camera flash is very quick, on average about 1/1000th of a second long. The illumination from that pulse is bright enough to freeze an object at that moment, and overpower any other residual exposure that may occur as the object continues to move over the longer 1/200th second duration the shutter is open. (Note, most cameras have a flash sync shutter speed of 1/200th or 1/250th, possibly 1/500th for more advanced/newer cameras, which is the minimum amount of time required to successfully synchronize the shutter actuation with a flash pulse.)

Using flash, you can also introduce some intriguing effects into your action shots. While synced flash photos are usually limited on the upper end to a shutter speed of about 1/250th of a second, you do have the option of using a longer exposure. Try shooting your ping pong scene with a shutter speed of 1/8th of a second, and configure your flash pulse to activate on "second curtain". The resulting effect will show motion blur of the objects through the duration of the exposure, and the flash will "freeze" any motion just before the exposure ends, making the objects appear clearly at the end of their motion blur.

Regarding correcting motion blur with post processing, it is generally not possible with most common tools. Blur caused by object motion is a physical thing, not a digital or optical aberration. It is also highly random (across an arbitrary number of photos) compared to digital or optical aberrations that can be corrected with software. As such, it is very difficult to correct with software without extensive knowledge about exactly what motion was captured (i.e. object motion vectors, which objects were in motion and which were not, etc.) Given the proper information, correcting object motion blur with software might be possible, however generally impractical for real-world photography.

In addition to @Pearsonartphoto's answer, you can use flash (either the built-in or better yet, an extarnal) to freeze the motion. You can actually shoot with relatively long exposure times (like what you currently have) and set the flash to 2nd curtain (or rear curtain; see your user manual for how to set that) and get nice motion effect, where the ball will have a "trail" of motion.

You can't use software, what you need to do is take pictures with a shorter exposure time. Check your EXIF for what you shot at exactly, but I'd try to reduce it by about 10 times. There is an excellent recent question on this subject, see What is the shutter speed needed to stop motion?

With your Canon 50D, I recommend you shoot in tV mode, probably around 500, maybe even 1000 or higher. You'll need a higher ISO then normal to correct for the motion blur and still have a decent DoF.

The ball's speed can reach 100 mph, about 150 feet per second (c. 45 meters per second). In this image the ball appears to travel about 0.1+ feet, implying it was exposed for about 1/1000 second (maybe 1/500 if the players aren't top-level competitors). To make it sharper, do a combination of:

In the first case, note that you will want to synchronize the flash with the second curtain: otherwise the ball might look like it's moving backwards. (See the paragraph at "second curtain sync".)

I guess this ball will look reasonably sharp if it travels less than 1/4 inch (0.02 feet) during the exposure. That could require about 1/4000 - 1/8000 second, which is attainable without flash on recent digital cameras. (Your 50D will go down to 1/8000 second.) Because this doesn't leave much time for exposure, you will need a large aperture and/or very bright ambient lights and/or a high-speed sync (HSS) flash. The large aperture will make for a shallow depth of field, creating a challenge for focusing. Using a high ISO will help compensate, but experiment to make sure the noise is acceptable.

Getting a good picture with a frozen ball would be an accomplishment. Afterwards you might discover you actually like a little blur for the dynamic effect it produces. Consider also taking your exposure times to the other extreme (around 1/50 second, or 2-3 feet of motion) to create a long trail for the ball. It might look pretty cool...

Not the answer you're looking for? Browse other questions tagged photoshop technique photo-editing camera-basics or ask your own question.

31
When to use shutter priority instead of aperture priority?
24
What is the shutter speed needed to stop motion?

12
How to properly capture photos for merging?
15
How do you shoot still motion portraits?
10
How to create motion blur in daylight?
8
What technique and settings should I use to capture meteor showers?
9
How to capture details of the moon?
9
How to capture fog movement?
8
How can one capture gun bore shots?
6
How can I improve portraits when shooting in low light without flash?
9
How to achieve sharp foreground with a motion blurred background?
8
How can I automatically digitally remove shifting sensor dust speckles from a large series of photos?