When can cropping off a part or including the whole subject's body be considered a distraction?

Basically the question is that when am I free to chop off the subject's body part and when I am not?

These photos are taken by me. Can you see the chopped body parts here? I wish to understand the human psychology.

In which cases can cropping off a part or including the whole subject's body part be considered a distraction?

Please consider adding different examples in your answers. They help to understand the concept better as compared to plain words. 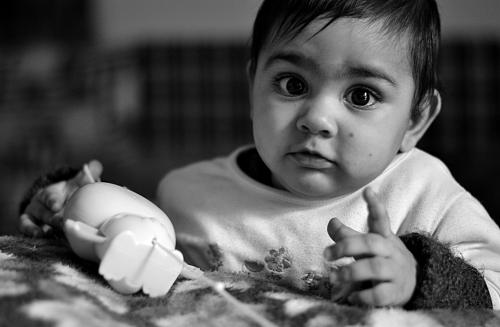 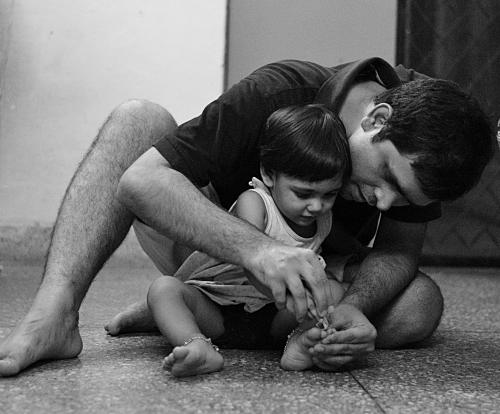 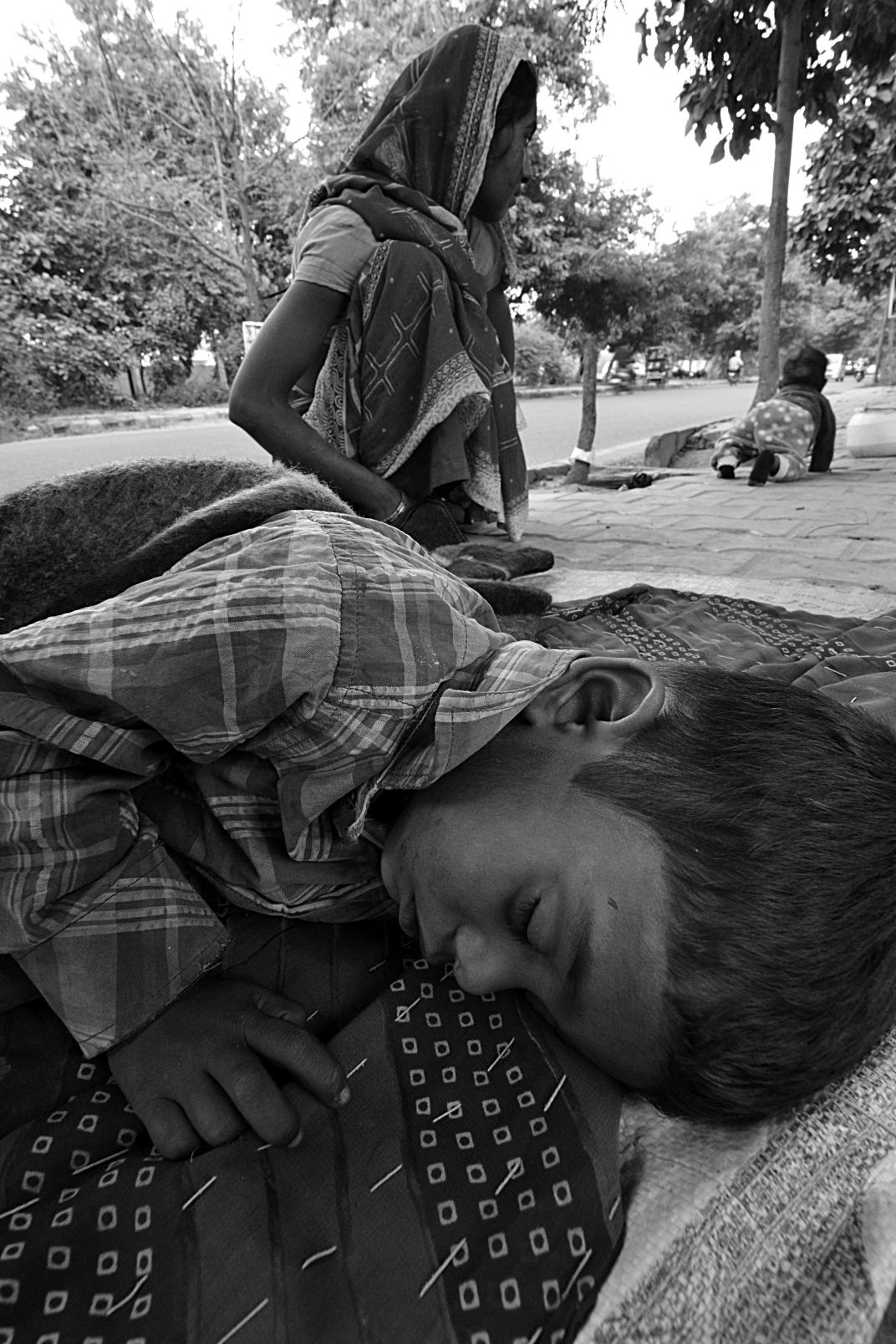 For me the foot is very distracting. That's because it's a remote part of the subject and it goes all the way to the left, through all that negative space just to be clipped off by the edge of the frame.

The leg isn't a leading line either. Rather the opposite, somewhat blocking the path of the eyes from getting to the subject, leading it towards the foot instead. Both arms of the man are good examples for leading liens the bring your eyes right into the action.

What's more distracting in this image is that the toy is brighter than the face.

conclusion: A cropped off part of a subject is annoying, if other visible parts of the image lead me to it so that I expect to see them eventually as my eyes go through the image. The distraction is the disappointment when this expectation cannot be full filled.

Applying what I said above 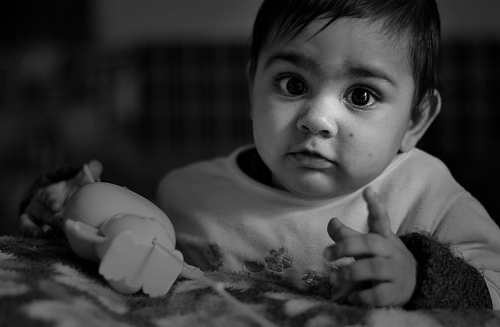 goal: make the face the brightest part of the image. eyes of the fewer are drawn into the face for two reasons now: focus and brightnes.

execution: adding a radial gradient layer on the face and used multiply as blendmode. In LR (which I mainly use for photo editing) one or more adjustment brushes modifying darks, lights and/or exposure will probably give a better result.

Yes I know, horrible execution, but I'm just on gimp at the moment and I have no idea how that works. (The main reason I use it is because I often can't find a way to close it) But you get the idea. 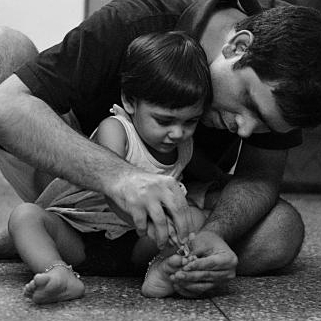 goal: include the leading lines of the picture and exclude the detour-to-some-uninteresting-remote-cut-off-part-of-the-subject lines

execution: cropping tighter on the "action", using the father as a frame. 1:1 ratio came a bit as a surprise but works well for me, always worth a try How long did it take before you noticed that the father's right knee is cut off in an obvious way? His elbow? And his right foot, did you spot that?

With this crop, the answer of my subconsciousness to these questions would be something along the lines of "huh? left third of the image? what do you mean...wait, there is a left third of the image indeed, I paid no attention. Man I was so busy trying to figure out what they are holding there. What are they doing? Can you tell me? I'm dying to find it out..."

You get a bit of an exposure problem because he is wearing black and flagging all the light. That's nothing you can change in a candid shot like that, but easily fix in post.

The answers here are great, but they're dealing with pure compositional aspects. There's also a biology aspect that wasn't mentioned.

Basically, don't crop on a joint. If you crop at a person's knee, for example, it'll tend to look like the lower leg was actually amputated, which is very distracting. Instead, try to crop to the middle of the limb.

This isn't a scientific question, it's about the art of the composition, which is opinion. However I would say that if the cropping distracts from the image, it's too much. How's that for ambiguous?

In my opinion, this first image with the baby is all about the eyes. Getting in very close enhances the affect. I'm so captured by his eyes that I don't notice anything cut off. I see it of course, but it's not distracting to me.

In the second picture I'm not distracted at first, but after a short while I notice his foot is cut off. Now it's beginning to distract me. Would I have noticed had you not asked? I don't know, but now that I've noticed it's distracting my attention from the subjects.

I think the difference is the first image has a very small and intense focus point, so I don't care much about the items just a short distance away, but the second is a broader scene, so I'm taking in more details all over, now that missing toe at the edge is more important to me.

A very wordy non-answer that could be summed up with "I just know it when I see it."

The main thing to avoid is cutting off a very small amount of a limb when it could just as easily be included without changing the composition. Your second example is a perfect example of that. Including all that leg, only to cut off the toes! Could just as easily included another few inches and not had that distraction. null's crop is a big improvement (but even so, he's now cut off a small bit of the elbow!)

The visual weight of an object increases in proportion to its distance from the center (or dominant area) of the composition.

So an object that is not really central to the image is near to the edge of the frame, it can receive more attention from the viewer's eye than intended. This is why it's important to pay attention when composing a shot that you don't have distracting elements pulling the eye away from the subject.

My guess is, if you crop mid-thigh, then the brain recognizes there is an incomplete body part and can largely ignore it, but when you just cut off the very extremity, that's something the brain picks up on. It's like an interrupted pattern, the brain expects to see the rest of that limb, and is "surprised" when the last little bit is cropped off.

So two things going on: eye being drawn to the edge of the frame by a leading line (leg) and tension caused by the (barely) incomplete body part, which distracts the eye from settling on the main subject.

3
How to compose a scene when including the actual context isn't simply practical?
2
How can I control figure-to-ground composition when I can't stage the whole scene?