How to compose a scene when including the actual context isn't simply practical?

In the below photograph of mine the father and the child were watching the wall lizard in the room.

It wasn't practical for me to include the lizard since it was far away on the roof. Moreover the room didn't have much area to move about, and I had the 50mm prime lens.

Even if I had the ultra wide I don't think I could have got the tiny lizard without including all the other background distractions.

How to frame the scene where including the actual context isn't that practical?

How to "improve the composition" when the context isn't there. That means that am I supposed to leave some space from any side or place the subject in a particular corner do anything else or leave some space for headroom? 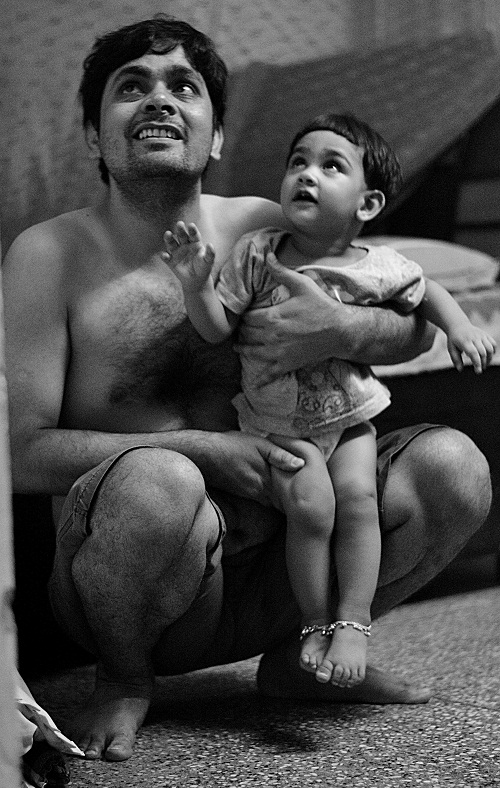 Sometimes, you just can't get this shot. That might be the case, here. You don't have the right lens, or the right positioning, and what you want to make happen, can't. In your case, 50mm lens and a small room — not much to be done.

I have three ideas, though

First, and risky, you could move so that you're actually in the line of sight between the subjects and the lizard. Then, you have a "lizard's point of view" image. I don't know, though, if the cherubic expression you captured would be the same. And I say risky because blocking the interesting view is likely to get upset subjects, especially when they're too young to be explained to and pose intentionally.

Second, you could talk to the older subject and perhaps have him look at the child. Possibly this would even align so that it seems like the child is looking adorably at the father and not a lizard at all. Or, if not, at least there would be some visual weight directed into the frame. Could work — but, is really a different photograph — in other words, just another way of saying you couldn't get the shot you imagined.

So, third, I'm thinking outside of the box. Literally! Take a second picture of the lizard in its place, and then print the two as a pair — a diptych — displayed with the photo of the lizard just above and to the left. Like this: 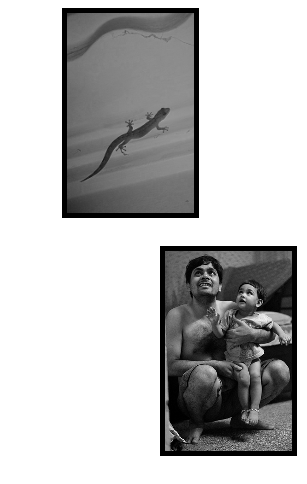 Hmmm. Well, maybe not at that scale. I just took a random Creative Commons image. But that's the idea — you couldn't get it all in a single frame, but the overall composition doesn't need to be limited to a single frame. Looking at this mockup, the lizard is clearly too large — might work better if it were smaller with the frame (as taken with your 50mm lens without moving, for example), or maybe even with a smaller frame.

Of course, you don't have to put the actual lizard there. You could put the mother smiling down benevolently, or just another photograph you'd like to draw attention to. (In that case, that frame could be even larger, with these two serving sort of like Raphael's cherubs.

I hate to state the obvious: if you cannot include it, don't include it. Don't force it, here's why:

You compose for a subject. What is the subject? Father and child looking at a lizard.

As long as the lizard was included in the frame, that'd be true. But it's not. The lizard isn't part of the subject. I think the subject of your image is a father interacting with his child. The interaction is to look at something that is not seen in the frame. It's not of particular interest what they are looking at, but that they are looking at something.

Let me compare this to other images. 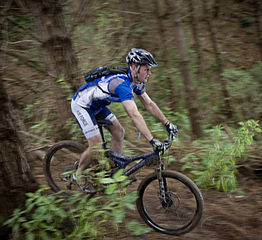 Is the destination of the cyclist included in the image? No. He might be miles away from the finish line, so it's naturally not included in this image. But not even the next part of the track is included. (Does it go further downhill? Is there a ramp maybe?)

I think most people would agree that it is ok when the destination of a cyclist is not included in an image. It's just an image of a cyclist cycling. But cycling clearly is a way of movement and as such it definitely has a destination.

On the other hand, some context isn't even visual. If you imagine an image of two people next to each other, is it clear if they are lovers or not? (Assuming obvious actions like kissing are not being portrayed)

Maybe they are just family members happy to see each other again, close friends, fans of the same football team that just scored...

You cannot tell what relationship they have to each other.

In conclusion I say that if for some reason something is not included in your image, you should not bother too much about it. People will pay more attention to what's in the frame. And you should do the same.

Sorry for the circular logic, but you kind of asked for it. I think your doubts stem from thinking "oh I really want this lizard to be in the image" yet you made it clear that it will not be part of the subject. The thought lingers on and does not allow you to enjoy a nice candid photograph of father and child.

I think above all else you have a cropping problem. Your crop doesn't follow the "rule of thirds," so it is already suffering from a sort of cramped feeling, like you've intentionally cut it out of context. Of course the reality is that you were cramped, but if you could choose your composition here is an example of a better crop: 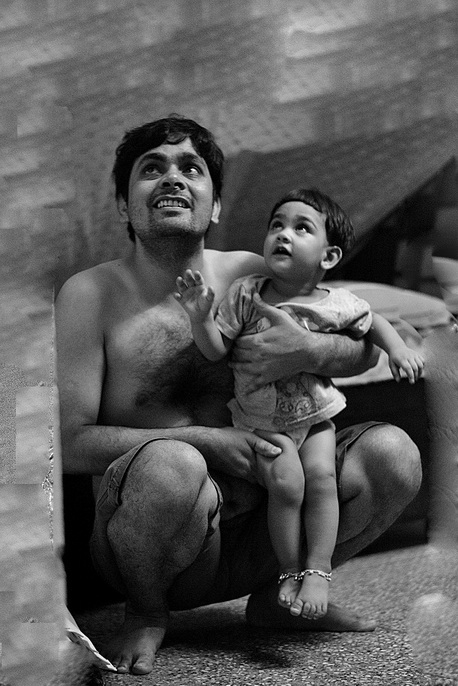 (If you want the explicit context of the wall lizards now you have a canvas above them where you could try to show a few hanging about, and that would suggest to the viewer that the subjects are also looking at one.)

I think it's okay to leave part of the image to the viewer imagination. So here you both are looking into something but I don't know what this thing is which is okay in photography cause I'll be wondering what are you looking at. Everytime you show this photo to anyone s/he will ask you what are you looking at? You engaged him or her in a conversation about the photo and you made him interested. I see it well composed, there's no much in the photo except your and your daughter looking at something and my eyes go rightaway to you and her. You could try to blur the background more maybe cause the texture of the curtain is somehow strong.

34
What makes a strong wide-angle composition?
13
How can I get people to take an expression which fits the scene?
23
How to capture the scale of a scene?
2
How to compose a scene which doesn't have any apparent story?
4
How to compose outdoor group shoots to balance the subjects and the background?
9
When can cropping off a part or including the whole subject's body be considered a distraction?
9
How can I compose shots with tall buildings without boring sky dominating the image?
2
How can I control figure-to-ground composition when I can't stage the whole scene?
5
How to improve the composition of the scene depicting time's effect on age?
17
How to compose such that the context does not overpower the subject?