How do I speed up button-to-picture for Canon XTi (400D)?

I'm trying to set up a fast image capture without using a strobe. The camera is connected to a shutter release device (pinewood derby timer) which triggers the camera when the first car passes the sensor.

However, even in manual mode with autofocus turned off it still takes too much time between the button press (activation) and the actual image capture.

I've looked at mirror lockup, but it appears that it requires two button presses, and I'd like to avoid the additional work (ie, a person sitting there putting the mirror up each race). It doesn't appear that mirror lockup can be done forever. Even with mirror lockup, it still takes time before the image is captured.

Are there other settings or modes I should look at? I assume the manual mode turns off metering, and is the quickest image capture setting, but I don't know the camera well enough to know for certain. Are there other things I can turn off that would speed up shutter release?

I think that you are doing most if not all of the right things to ensure that you are capturing the image in camera as fast as possible. The obvious ones you have done; turn off AF and use manual mode. Beyond that I would look at your shutter release methods.

It sounds like the sensor is may be placed at "the finish line", where as it might benefit your situation to place the sensor slightly ahead of that location. I'm not fluent in physics, but I'd imaging a pinewood derby model car can only go so fast and it could be calculated exactly how far ahead to place the sensor for the desired shot. You also would either want to calculate or lookup the shutter lag that is inherently built into your DSLR. Quite a few camera reviews already offer this information that can be easily found on the internet.

Finally, you didn't mention what particular shutter release device you are using, but I would consider some of the other options that may work better or provide additional functions to improve your results:

Shutter lag of the XTi

Measurements by Luk at doc-diy.net show this camera has an average* 116mS lag without mirror lockup, and a 66mS lag with mirror lockup. Fast pinewood derby cars travel about 10 feet per second (3 m/s), leading to a 7-14" (18-36cm) travel time before the image is captured. While the camera would never be used for judging, this is long enough that the cars could switch leads between the finish and the image capture, leading to questions about which vehicle really won.

Another comment on photo.net suggested that particularly old batteries may contribute to shutter lag. Given that I purchased the camera shortly after release, and haven't purchased batteries since then, I did buy two new batteries just in case this was affecting the timing. I didn't test out the old batteries though once I received the new, and my initial testing wasn't useful for determining actual timing, so I cannot confirm these results.

Shutter lag measurements for a variety of cameras

Another site has collected information about shutter lag times with and without autofocus. With SLRs I'm not sure the autofocus times are useful anyway since the lens focus motor speed is the largest factor there, and it varies from lens to lens. Most appear to be in the 50-100mS range, but some cameras have times of less than 10mS. Nothing about mirror lockup, though - I expect some of the higher end SLRs should have a much better mirror lockup time than this camera, so there's more data to be collected. Also would be interesting to see a comparison of those SLRs with live view while in live view mode.

So I knew it wouldn't work, and when I ran the pinewood derby I just hooked the projector to an HD camera and shot the end of the track and finish line so everyone could view the finish regardless of their sightline to the track itself.

Afterwards I did hook the camera up and ran a few races, and the results were as expected - the cars showed up in the image about 14 inches (no mirror lockup) past the finish gate.

If I wanted to use this camera in a future race, I would make a light beam trigger about 14 inches before the finish gate. A more advanced trigger would use mirror lockup about 2-3 feet before the gate, and another trigger about 8 inches before the gate. Even more advanced would involve a microcontroller (arduino or similar) and perform the mirror lockup at race start, measure the speed of the lead car about 12 inches prior to the gate, then trigger it based on the speed to capture the most likely point where they cross the finish gate.

The track and arena aren't particularly well lit, though, so another possibility is to use the same techniques as other high speed photographers. Set the camera to a low ISO and tight aperture, start a bulb exposure shortly before the gate, then use bright flashes triggered by the gate to illuminate the scene sufficiently to capture the intended image. This would be the most accurate, since the starting gate could then be used to trigger the flashes, and the image capture would happen absolutely simultaneously with the actual gate finish.

The video output of this camera is only composite (not component or HDMI - ie, an SD video image!) so it didn't look good anyway. I'd suggest, if someone later wants to do something like this, choose a camera with an HD output. It was usable and interesting, so I wouldn't drop money on a new camera just for this use, but it's yet another thing I'll have on my list of priorities when selecting my next camera.

Here are several of the images the camera captured. Again, this is without mirror lockup, being triggered at the gate in the photo. 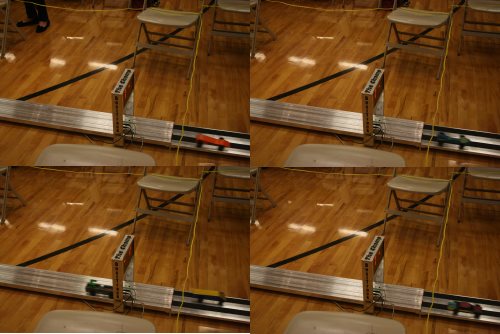 The XTi has a bit of shutter lag of somewhere between 1/5 and 1/4 of a second, even when fully manual (including meter, white balance and focus). Pinewood derby races are about 4-5 seconds over the 50 foot tracks. To account for the shutter lag you may need to place the sensor about a foot or two (+/-) ahead of the finish line. Try to use a wider angle lens to capture all the cars. Alternatively, use a camera with video capabilities (the XTi does not shoot video) and extract the frames you want.

Not the answer you're looking for? Browse other questions tagged canon shutter-release canon-400d mirror-lockup or ask your own question.

10
How do I clear an AE lock on my Canon XTI?
13
How can I prevent blurred images when using a tripod?
4
How can I use mirror lockup with wireless remote on a Canon T4i?
7
How can I transfer pictures from my Canon Digital Rebel XTI (400D) to my Mac?
0
Camera stops by itself while shooting, or shows no battery, then ok again?
3
How to configure Canon EOS 550D for dumb strobe lights?
2
Canon EOS 400D - Shutter Release Lock Override
4
Is it normal for shutter speed to vary between shots on low exposure time?
13
At what shutter speeds is mirror lock-up worthwhile?