Can you estimate whether or not the sky is clear from a photographs metadata? [closed]

It is proving difficult to find sources of data to be able to validate the method I am using and I am now looking outside the box. My question is this: would it be possible to use combination of metadata (such as mentioned in this question) from an image file to estimate whether or not the photograph was taken under clear sky conditions or cloudy conditions?

I am able to identify clouds in the satellite images quite easily and flag the pixels in a pre-processing step, but its is not possible to validate that all the pixels in thousands of these processed images have been correctly flagged. Thus I am concerned with using any information possible from photographs taken on the ground to see if I can validate that the pixels that contain cloud cover have been correctly flagged.

If the ExposureMode is an automatic or semi-automatic one, such as A, P, S, but not M, you could reverse the Sunny 16 rule to find out if the photo has been exposed for a sunny or overcast day. By comparing the actual exposure with the exposure based on the Sunny 16 rule, you can estimate if it was sunny or not.

The lighting from the sun is close to constant, so an ideal exposure will always be the same with direct lighting.

But it will work only if the picture is more or less grey(the closer to a 18% grey card, the better). It won't work with a picture of a white patch of ice, nor with a black coal mine. But it will probably work with vegetation.

Another idea is maybe to use the white balance? But again, you will have a lot a false positive and negative. You will probably need a lot of images taken at the same place and time in order to deduce something...

I think you would have a tough time with simply EXIF metadata, but there are other options.

If you would expand your selection to include a histogram that can evaluate the complete tonal range of an image, you could get a rough idea if it was cloudy or not based on the contrast of the image. Contrast is typically not something that can be understood simply by looking at the standard EXIF data though, as the aperture, shutter speed, or program mode selected does not typically do much to indicate the contrast - although with some interpretation it could.

Take a look at this answer and specifically the section on contrast for more information: How and why do you use an image histogram?

No, meta-data (and from it exposure value) isn't enough to determine if the sky is clear or not.

A while back, I decided I wanted to photograph the fog and get some grain to it (I was shooting film (I did get the grain I was after but that's another story)). 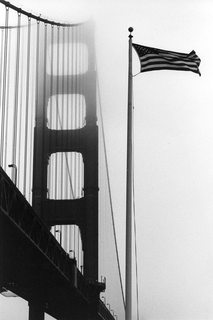 When you stick all those numbers together, it is an EV of either 16 or 17 (based on this chart). An EV of 15 is the classic Sunny 16 and an EV of 16 is often described as "Subjects in bright daylight on sand or snow". An EV of 17 is "Rarely encountered in nature".

You can see, that this is not a sunny day though it was very bright.

Thus, quite simply said - no, the exposure information alone will not tell you about if the conditions are overcast or not.

I think most the answers concentrate on what is traditionally considered "META/EXIF data" by photographers. That is Aperture, Shutter speed and ISO.

I would't expect satellite images to have varying aperture and/of shutter speeds (I could be wrong) but what's also included in the META/EXIF data is the histogram. This can be very useful. 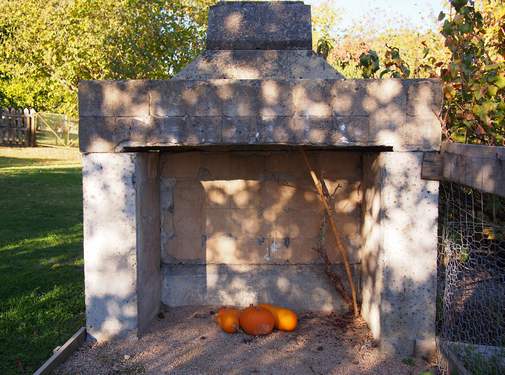 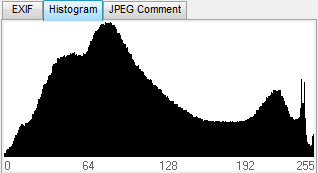 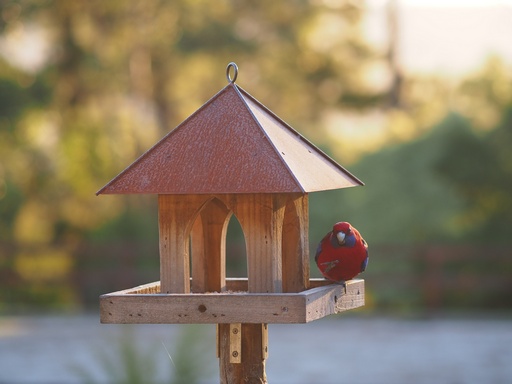 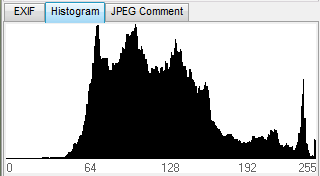 Notice how the brighter image shifts to the right and the more shadowy one is more to the left.

I'm not an expert on jpeg headers and file structures but I'm sure this can be found. These might be some interesting articles:

I wanted to write this as a comment but I had more to say.

The metadata will not tell you anything especially useful in the situation of trying to estimate ground conditions from a satellite image.

If the metadata includes the details of the area covered in the image then you may be able to do a data mashup with weather radar imagery to estimate cloud conditions and extrapolate them to light available on the ground but you would get a more reliable result from the image data.

If you need to automate a solution then you may be able to play with machine vision libraries like OpenCV which might show you the cloud cover in the images and allow you to estimate where they would fall on the ground.

Definitely nothing about that would give you what you need from metadata.

You would be down to some amount of image processing even if automated by OpenCV or similar, where you have a few options to cross check your processing.

One option you could use is to examine the output of webcams. You can find publically available ones through services like earthcam to see (again using tools like OpenCV) to see if the data at those sites match your expectations. The image processing and selecting cameras make take a bit of effort but it's a one-time activity.

You could also compare your results to cloud radar, where you have point sources like Copernicus or the output of other cloud satellite imagery like that available at sat24.

Not the answer you're looking for? Browse other questions tagged metadata or ask your own question.

120
How and why do you use an image histogram?
13
What useful things can/can't you find out from exif tags?

13
What useful things can/can't you find out from exif tags?
11
How can I export EXIF metadata from Apple Aperture?
14
What tool can visualize metadata from many photos on a Mac?
3
Can you specify which metadata to export in Lightroom other than the few standard selections?
8
How to remove 'Program Name: Adobe Photoshop' from the metadata?
3
How can I record the zenith angle of camera within the metadata of a photo from smartphone (iphone)
3
How can I reset or clear the Lightroom Metadata Conflict warning?
2
Can I see the specs of the memory card used within the metadata of an image?
0
How can I infer parameters such as distance from metadata?
1
ExifTool does not extract corrupted EXIF metadata from jpeg file. How to repair it?