What is the formula to find the widest f-stop for each of these focal lengths?

The focal length of a modern zoom lens isn't something that is nice and easy to work with a lens equation to get the answer.

From hyperphysics on the true zoom telephoto lens, the lens can be thought of as a few different elements:

The problem is, these elements keep moving around:

which makes the entire system a bit more complex to calculate for. You might be able to sit down with the lens diagram for one lens, and work it out, but a general solution beyond the pure math isn't easy at all.

Pierre Toscani has a wonderful site (mostly in french, but there are many translated to English) that goes more into the specifics for specific Nikon lenses: http://www.pierretoscani.com/annexeGB.html

The diagram from hyper physics applied to the Nikon 80-200 f/2.8 as animated: http://www.pierretoscani.com/images/echo_telezooms_english/Figure-12.swf 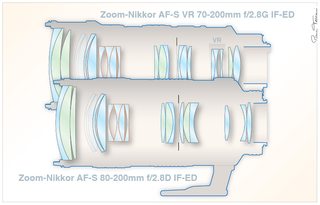 Specifically looking at the information about the pupil and aperture (and this is yet to be translated), figure 28 for a macro lens (animation - "N" is the f/stop).

I'm going to point out that all of the examples are with a constant aperture zoom. When you go to a variable aperture zoom, the design trade offs make to make it a simpler lens to produce (less glass) make the specifics of what the f/stop for any given focal length and focus distance is a non-trivial equation.

For example, for a Canon 70-300 f/4-5.6 from Outdoor Photography on Variable Aperture Lenses: 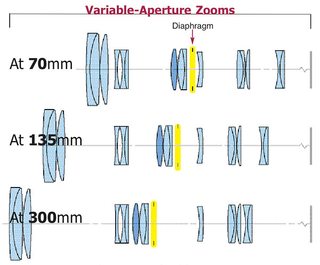 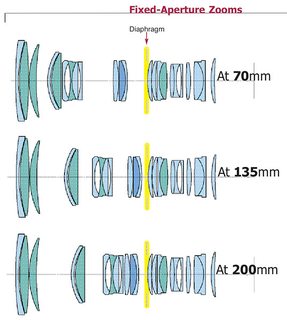 Note that in this chart, there is no rhyme or reason as to how an individual lens will change its f/stop in accordance with its focal length.

That the diaphragm moves as the zoom changes makes this non-trivial. Without close study of exactly how the lens is designed and what movements it has in its barrel, this is likely best done experimentally rather than mathematically.

The other approach is to set the camera to manual exposure (aperture, f/stop, and ISO) and then shoot a gray card. When you are done, reading the values back from the images should give you the information about the actual exposure the camera and lens system were providing from which you could determine the ratio of the aperture at any given focal length to the original aperture (wide open at widest).

That said, if you can hunt up the specific information for a lens, you may be able to find the information given for you. Lens designs can be patented. The Nikon 70-300 f/4.5-5.6 is covered under patent 7,158,315. And much of that information is boring... but as you dig through it, there is a table of lens specifications.

And while they don't give all the data for all the focal lengths, it puts you on the right path for the remaining calculations. Not all lens manufacturers give as detailed information in their patents though.

Not the answer you're looking for? Browse other questions tagged lens focal-length calculations or ask your own question.