Why does the same f-number mean same amount of light? [duplicate]

Intuition tells me that a bigger lens will collect more light with the same f-number than a small lens. But photographers tell me I am wrong. I cannot understand why.

There are quite a few posts both on SE (e.g. here and here) and elsewhere addressing this question. But I fail to understand it and would appreciate if someone could answer it slightly differently (ideally without photographic terminology, but from the purely optical perspective). For simplicity, let's say that we are trying to image an object located at infinity. Its image will be a single on-axis pixel on our camera sensor. 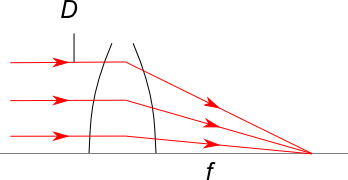 (I know about the T-stop number, but let's ignore the transmission for the moment. I am interested in geometrical treatment only.)

I think you may not be factoring in the distance needed to make the image the same. If the image isn't the same then the light can't be the same and so you have to factor that in.

You are right that the bigger lens collects more light at the same f-Stop because the iris is an actual different size. But you're assuming the same distance, and that's not how f-stops work. f-stops inherently factor in distance because they based on focal length.

Imagine a magical world where there is no atmosphere, glass has no attenuation effect on light, no background and all cameras are invisible. :)

Assume two lenses with the larger being double the focal length of the small lens. Let's pretend they are a 50mm and a 100mm.

The camera with the small lens is set up close enough to have all squares in the frame so they just touch the edge.

The small lens wide open will collect x amount of light from each square. The longer lens at the same distance, will only be able to see the middle four squares but it will collect more light per square as each square image will be bigger on the sensor.

If you move the camera with the long lens away from the squares (double the distance) so that it can see all of the squares, then the amount of light per square drops because they now take up a smaller amount of space each on the sensor.

Let's forget the Inverse Square law for a moment.

This is why f/stop is a symbolic representation of light capacity vs an actual real world measurement of an iris diameter.

The light IS (inversely) proportional to the focal length. A long telescope at high magnification sees a dim image. Binoculars are short, and see a brighter smaller image.

Yes, a 200 mm f/4 lens is 2 times the diameter, and 4x the area, which passes 4 times the light, compared to a 100mm f/4 lens. However, focal length also involves magnification, and the 200 mm lens projects the object image at 2x distance, which is 2x larger, so the image of the object is now 4 times the area (of the 100 mm lens).

Sure, lens efficiency can vary slightly with number of glass elements and coatings (T-stops), but the general principle is f/4 is f/4, regardless of lens details.

Not the answer you're looking for? Browse other questions tagged optics light or ask your own question.

21
Why do two lenses with the same F-number give different amount of light?
3
Can I use my camera to measure lens light transmission?
3
Why does it seem like large sensors are necessary for good low-light performance?
3
Why does illuminance stay the same for a given f-stop even when focal length changes?
1
Does the sensor size matters in the size and weight of an equivalent lens? Why?
0
Light falloff - until lens surface, focal center, or camera sensor?
4
Does the T-number account for lens vignetting, or only for glass/coating transmission?
0
Comparing the amount of light on different sized sensors