Does getVerticalViewAngle() give actual Camera Angle Field Of View(CAFOV) value?

I am utilizing a built in function named "getVerticalViewAngle()" to get the Vertical View Angle of Android Device Camera. The above function returns "63.8146" degrees as the Vertical Angle.

Now if I use the tablet on a tripod so that tilt is eliminated (Keeping tablet camera lens height as 900mm) and capture a picture of a wall at a distance of 1500mm, then 1800mm of the wall(vertical) is included within the picture. Calculating the Vertical Angle based on above scenario yields 61.9275 degress which is not equivalent to 63.8146. 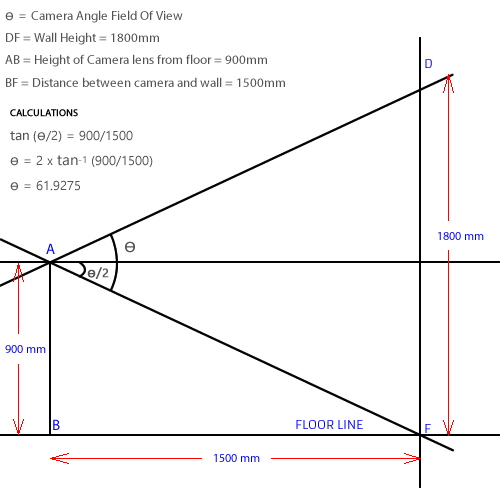 Can anyone please explain why there is difference between Angle values?

The angle of could be stated at infinity focus. Focal length (and thus angle of view) usually change slightly when focusing at different distances, unless you spend 5 figures on a cine lens. However normally the focal length gets shorter the closer you focus, and I can't imaging a mobile camera lens does much more than unit focusing (moving the entire lens back and forth).

The other thing to note is that the function will just be recalling a value stored in the camera firmware, it's not measuring it directly, so if the wrong value was entered or if it was measured using a different procedure or standard, then it might disagree with what you're observing.

At the end of the day an Android tablet is not a scientific instrument so I would expect it to be calibrated as such. The stated value is probably enough for most camera apps to work with.

3
why do most camera apps use a limited set of shutter speed values instead of a continuous value?