I remember seeing some photos taken of children which had been staged by getting the kids to form a rugby scrum - all in a circle with arms around each others shoulder and leaning in to look at the floor with the camera lying on the floor in the centre. 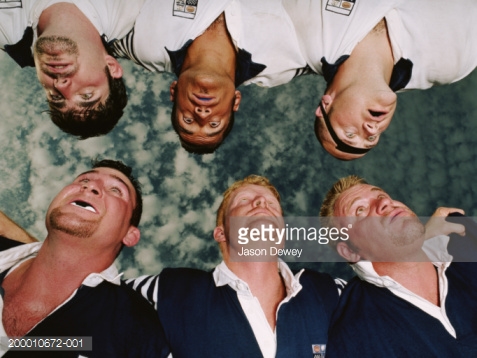 I have a remote trigger for my Nikon DSLR (D3000) and a 50mm Lens (also a kit lens 18-55). What aperture / shutter settings would people recommend? Its likley to be outdoors and I won't have much time to play with settings, kids being kids! I'm guessing the distance between the camera and the kids' faces would be 1 meter or less. I could just stick the camera on auto but was hoping to learn something in the process.

There will be many different ways of achiving this, but this is the way I would go about it. If you have limited time available for the shoot, then practice first.

Take a square of scrap wood, and mount a simple tripod head to it in the centre - this will get your camera low. The bigger your piece of wood, the more stable the camera will be, and the flatter it will be. I'd go for something about 50cm square. This will also give your kids a target.

Only some tripods will go low enough for this shot, and they would probably require the legs to spread far enough to interfere with the legs of the players. A tripod would be less easy to level on rough ground as well. Lying under the scrum will raise the camera quite a bit and raises your risk of getting stood on.

You'll want a cable/remote release, trigger many many shots, and then filter after the shoot. You'll want to be close to the action yourself, as you'll want to check that the kids are central over the camera.

Get the kids to try combinations of looking at the camera, and looking up at each other. The pose required may look nothing like a scrum from the outside.

Find a way to make it fun for the kids, especially if they're shy about having their photo taken, you'll get a much more 'camera time' and you'll get much better photos from it.

You'll probably want a medium-small aperature, as you'll want their whole body in focus. Manual focus may be a good idea to avoid the camera focussing on the sky accidentally. Shutter speed doesn't need to be too fast, and as you'll be using a flash, you'll have to keep it below your sync speed.

Start by exposing for the sky - if you have a dull sky this will ruin the image.

Get a flash or two mounted to your board, and find a way to get the light diffused a little - probably push them away from the centre of the board where your camera is mounted. Modify your flash strength to expose the faces to match the sky.

Show them what you're aiming for to start with, provide them feedback by showing them the pictures, and make it fun. If it's a game, kids will maintain their interest a lot longer.

Take some "muck around" shots, this allows them to have fun, without ruining your shot (these sometimes turn out to be the best shots of kids)

Not the answer you're looking for? Browse other questions tagged aperture technique subject-positioning or ask your own question.

47
What technique and camera settings should I use to capture lightning strikes?
8
What technique and settings should I use to capture meteor showers?
17
Why isn't my variable-aperture photo more interesting?
23
What is the Black Card Technique?
3
Technique for a Trick Photograph(Transparent Hands over the Face)
2
What is the difference between Digital Blending & HDR technique
24
What technique is used on old technical brochure pictures, which look like a “polished” or “smoothed” rendering?
4
Glowing figures photo technique
4
No1 Pocket Kodak aperture 1 to 4, f stop equivalent?