Why are the tops of people's bodies missing from this photo taken with a tablet from a moving car?

My friend recently took a picture with her tablet of two boys riding a bicycle while she was in a moving car. When she viewed the picture, the background was very clear and the bicycle and the lower part of the boys could be seen but the heads of the boys could not be seen. She somehow convinced that she captured ghosts (hehe).... Please help me explain this to her in technical/photography perspective. 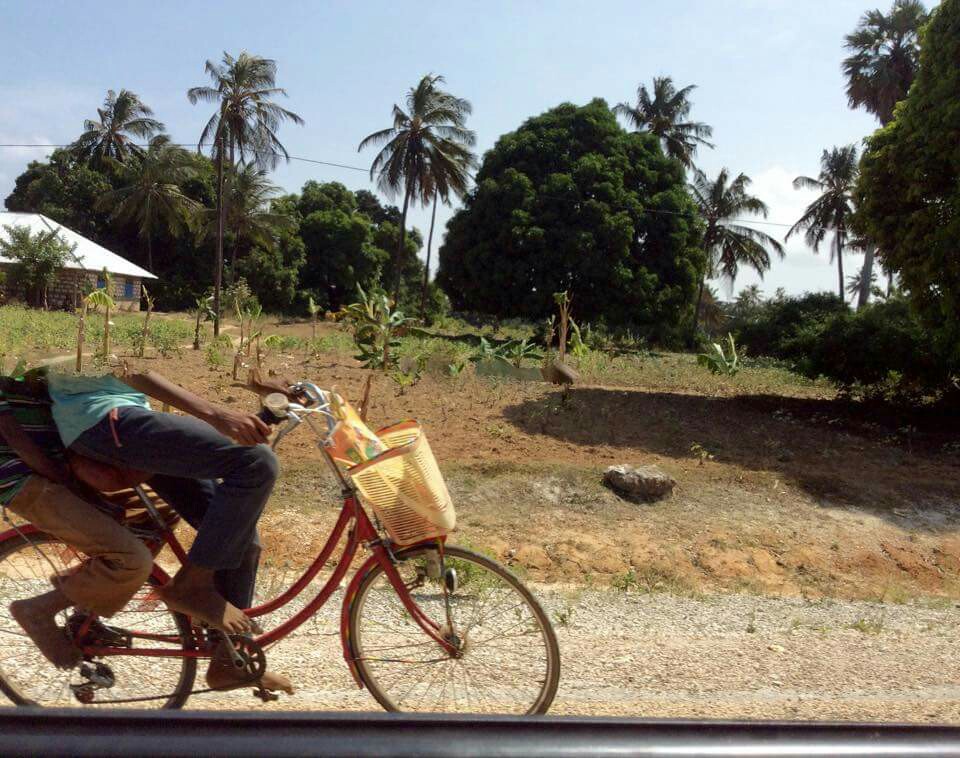 I have attached the specific picture that is in question. I look forward hearing some expert explanation.

Rolling shutter looks like the most obvious answer but I'd say it is a red herring.

With rolling shutter the cyclists would not be cut in half as they are, they would be bent or warped through their full length, all of which would be in the frame. As would other objects in the frame. The wheels would also show signs of extreme geometric distortion in the spokes which doesn't seem to be the case.

Even accepting a read/burst break caused the behaviour - the point at which they're cut is not straight, nor does it run horizontally (or even straight) in the image. Nor is it applied across the full width of the image - I'd expect a similar cropping to occur with the tree on the right which again is not the case there.

On closer inspection the rider's hand is cropped lower than the rider and passenger's bodies - the cut is not horizontal across the image as well as not being straight.

Having ruled out the only photographic option we need to look elsewhere. That means the image was produced in software, either deliberately by the user or by an app on the tablet. So what might that be is speculation since the image doesn't give us absolute proof.

I see a tearing effect across the passenger and rider. Plus, where the riders hand is cut, it is rounded rather than square. This points me in the direction of an edge-detection algorithm. Probably one built for cutting and combining multiple images perhaps intending to create a sharper image. Similar effects can be seen on 360 degree images built from multiple exposures like Photosynth where the processing system can't quite work out the joins or if people/objects move between shots.

This process is probably built into the camera app and would not have been done by the user. If an option to control the behaviour exists at all it's unlikely to be obvious that it would create this output, so the user wouldn't know what was happening they just press the button and get the picture out.

This is very likely the result of an automatic HDR mode.

Because of the apparent high contrast of the scene, the camera app tried to blend multiple pictures of the scene with different exposures together.

Due to the fast movements in the scene, not all of these source pictures contained the cyclist, and so it's only visible in parts.

I know from experience that some camera apps (like the one from iOS) will automatically switch to HDR-Mode if the scene-contrast calls for it.

A rolling shutter would cause geometric distortion, like in the following picture. (The shutter speed was around 1/5800 (electronic shutter) and I moved the camera to follow the cat.) 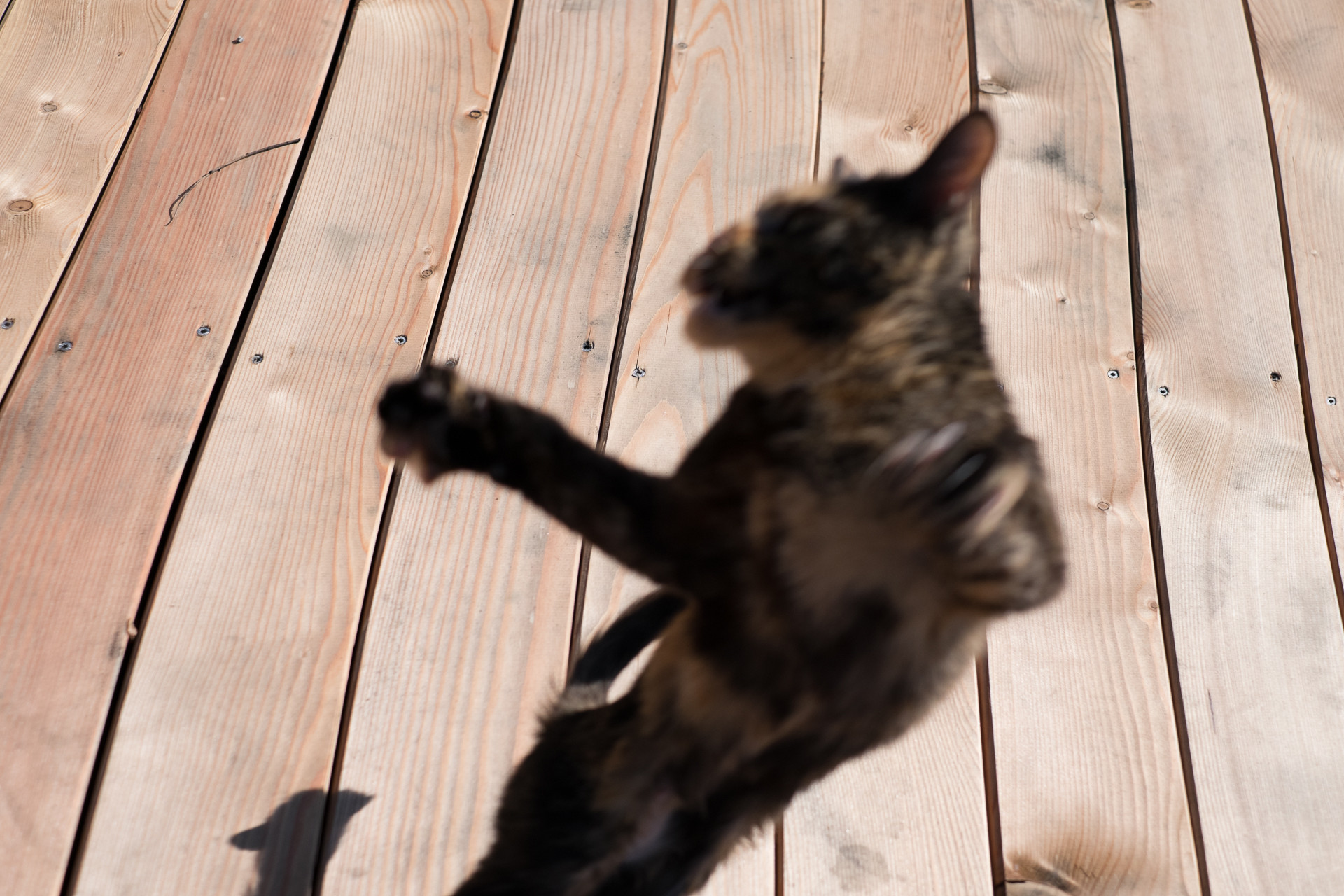 Please note that I added this picture only as an example, not for it's quality or artistic value ;)

I had this same exact issue with a picture that was taken of my family a few years ago. In the picture, my father is cut in half (also the top). In this case the explanation of the different stripes does not apply. We were all sitting on a bench and the picture came out in perfect detail but only half of him (exactly) is missing. I took the picture with an actual old camera (Canon), so no phone or tablet.

PancriPancri
1
New contributor
Pancri is a new contributor to this site. Take care in asking for clarification, commenting, and answering. Check out our Code of Conduct.
1
Add a comment  |
-1

This is due to the "rolling shutter" effect. See this video for a somewhat nauseating example, or this description with great graphics.

Basically, at this exposure setting, not all the image is scanned in one instant, but rather in stripes, so that the bicyclist was not in the frame for the whole duration (though the background, farther away, was visible for the full exposure).

Not the answer you're looking for? Browse other questions tagged exposure shutter or ask your own question.

7
Can telephoto lenses cause the background to be darker than the foreground in the same light?
3
Why do I have to press the shutter button twice to take a photo with my Canon DSLR?
13
If a rolling shutter travels from top to bottom, why does this image seem to show skew in the other direction?
5
Why are my Close-up Photos Underexposed with the EF 100mm f/2.0 USM?
2
What settings might have been used to get this photo with clear stars and long trails from car lights?
9
Why is the earth not overexposed in this star photo from the ISS?
1
Why are Canon 700D photos under exposed when compared with the preview?