How can I get this "brushed background" but clear subject effect by manipulating film negatives?

I was recently inspired by the works of Davis Ayer, who manipulates film to achieve a very unique look. I have been manipulating film negatives myself, but I have yet to learn how to achieve these specific looks and textures: 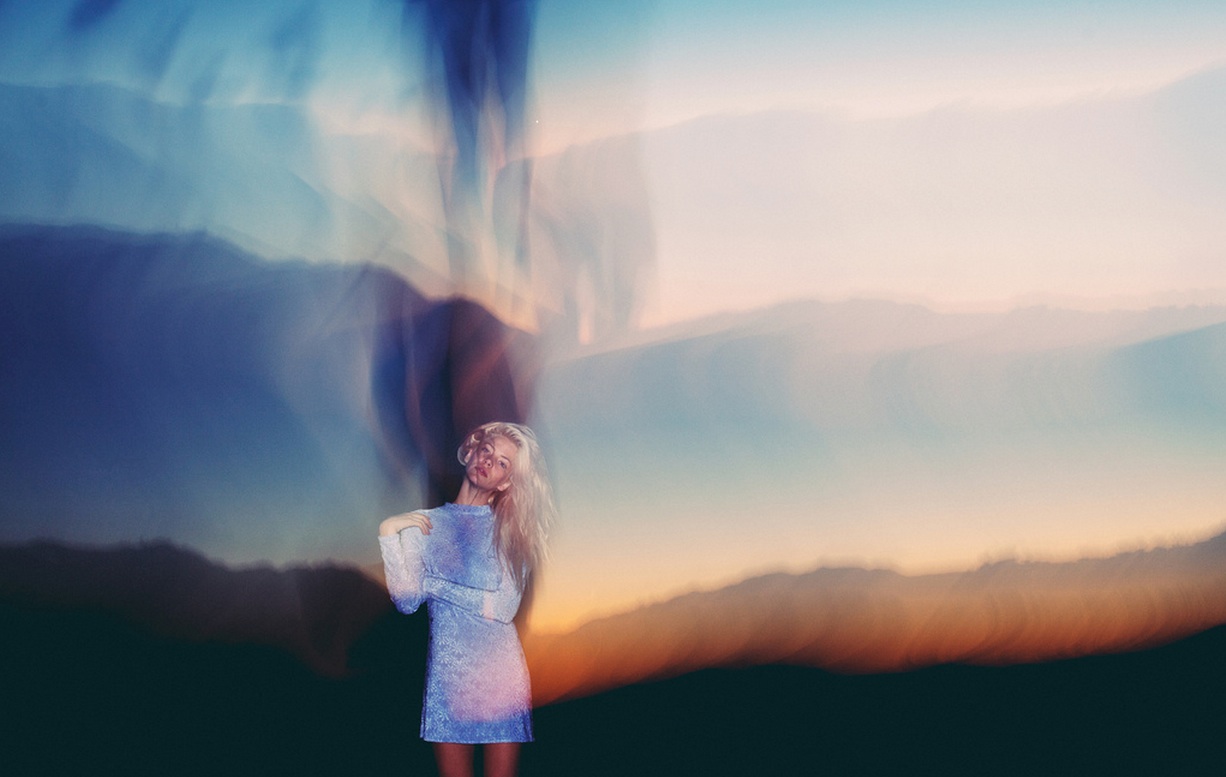 The idea of the photo having this almost "brushed" effect was what intrigued me the most. The background had this effect, yet the model in the foreground was clear.

The image looks like it could have been done in-camera, if the camera had a multiple exposure function. If the camera was tilted down for the first exposure, level for the middle exposure then tilted up for the last, you would achieve the stepped gradient effect we see here.

The model looks to have been photographed against an evening sky (or sunset), and appears as more of a silhouette in the first two exposures (where she "appears" top and centre), which is what you would expect if you didn't have any fill-flash or other light source to illuminate the model.

If the first two exposures were handheld at a relatively low shutter speed, a flash firing on the last exposure would explain the crispness of the model at the bottom of the frame.

I'm not saying this is how it was done (obviously I'm not the original photographer) but it could have been done in this way without the need for any darkroom trickery.

Not the answer you're looking for? Browse other questions tagged film negative-film negative or ask your own question.

3
How to achieve a flash image with a very bright, almost-whited-out subject and dark background?

15
How to store and preserve film negatives and slides?
4
How to determine date photo shot or developed from pre-digital age pictures?
11
How can Walter Mitty examine the negatives of photos in the bright sunny day?
4
How can I view vintage medium-format negatives (from about 1950)?
5
Why am I getting vertical black bands across my negatives and how can I prevent this?
4
Hold baggage xray scanners - how likely is it my film might have survived?
16
What colour scheme for model aircraft should I use to give a realistic black and white film photo?
4
Create ICC Profile for Negative film
1
Which step/component of film photography matters most when trying to get a very vintage, grainy look?
3
Can I use a red light bulb to load film in a development tank?