Can I photograph a solar eclipse using a 10-stop Big Stopper (+ extra ND?)

Will a 10-stop ND filter (Big Stopper) allow me to photograph a solar eclipse?

I read in another post here that solar filters are around 14-stops - presumably I would need around this strength even for an eclipse, as it's related to the peak brightness, not the size of the sun. Stacking a 10-stop and a 4-stop ND should result in a solar filter, even if it has significant vignetting?

Stacking ND filters will further cut the amount of light coming, careful trial and error will be way forward to finding out. If you need to use the finder first put a piece of paper where your eye would be - this will give you some idea of the intensity of the light being passed by the filter(s). The Baader film is rated as safe for direct viewing and will therefore be a guaranteed safe choice for your sensor. And it's considerably less than £150...

Solar filters limit not only visible light but also ultraviolet and infrared light from the sun.

Infrared is particularly dangerous as your retinas have no pain receptors or other nerves that detect heat. You can literally 'cook' your retinas by looking at the sun through a high power lens and not feel the first twinge of pain!

So the absolute first rule is: Never look directly at the sun through the viewfinder unless a proper SOLAR filter is in front of the lens.

As long as you don't keep the camera pointed at the sun continuously, the camera will probably be OK if you use a combination of ND filters that add up to 14 stops. Keep in mind that in Live view the shutter stays open and the sensor is continuously exposed to whatever light is projected by the lens. In viewfinder mode the sensor is protected by the closed shutter, but the secondary mirror reflects a portion of the light from the image projected by the lens down into the autofocus array.

After you do it you might always wonder if you caused any harm to your camera's sensor or PDAF sensor.

I photographed the transit of Venus back in 2012 with my brand new Canon EOS 7D, a 70-200mm f/2.8 lens set at 130mm or less (to reduce the concentration of the sun's energy), and a piece of welder's glass taped to the front of the lens. The glass wasn't quite large enough to cover the entire front element and there were narrow slits at the top and bottom that let unfiltered light fall on the edge of the lens. The entire event was within a couple hours of sunset, so the sun was never higher than about 30° above the horizon. At lower angles in the sky the energy from the sun is reduced as it has to pass through more atmosphere to reach the ground. 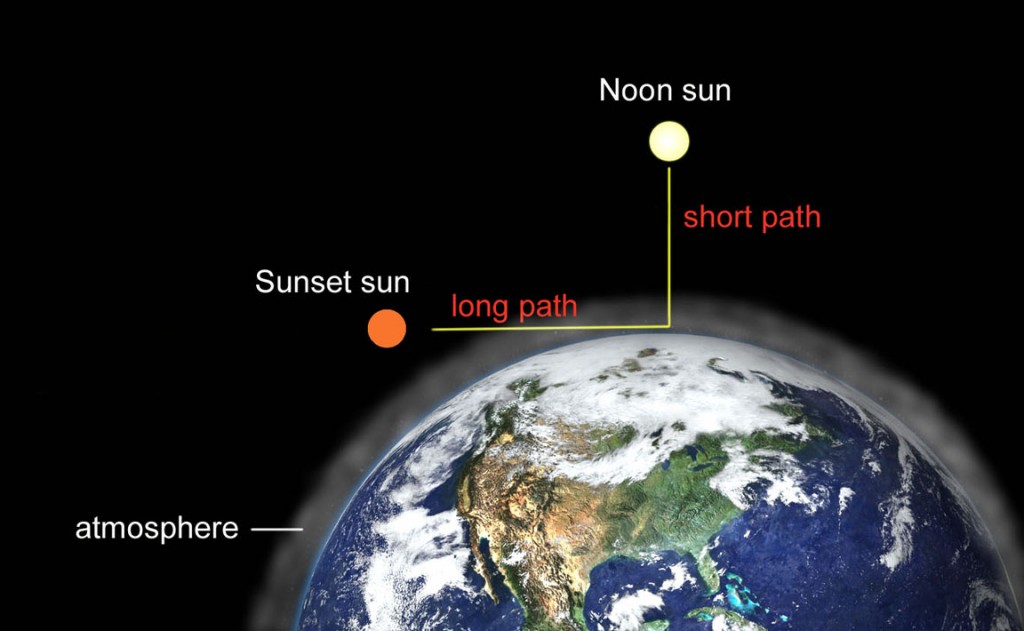 Welder's glass does protect from infrared and ultraviolet as some forms of welding produce IR and UV in addition to visible light. I used Live view to manually focus and frame the tripod mounted rig, then switched back to viewfinder to take the shots via a cable release without looking through the viewfinder. I could see the preview images on the camera's LCD immediately after each shot was taken to know when the camera needed to be re-aimed as the sun moved down through the field of view. With only a 130mm focal length, even on an APS-C camera framing was not critical as I was planning to crop significantly as the sun was only about 10% the height of the shorter side of the image. 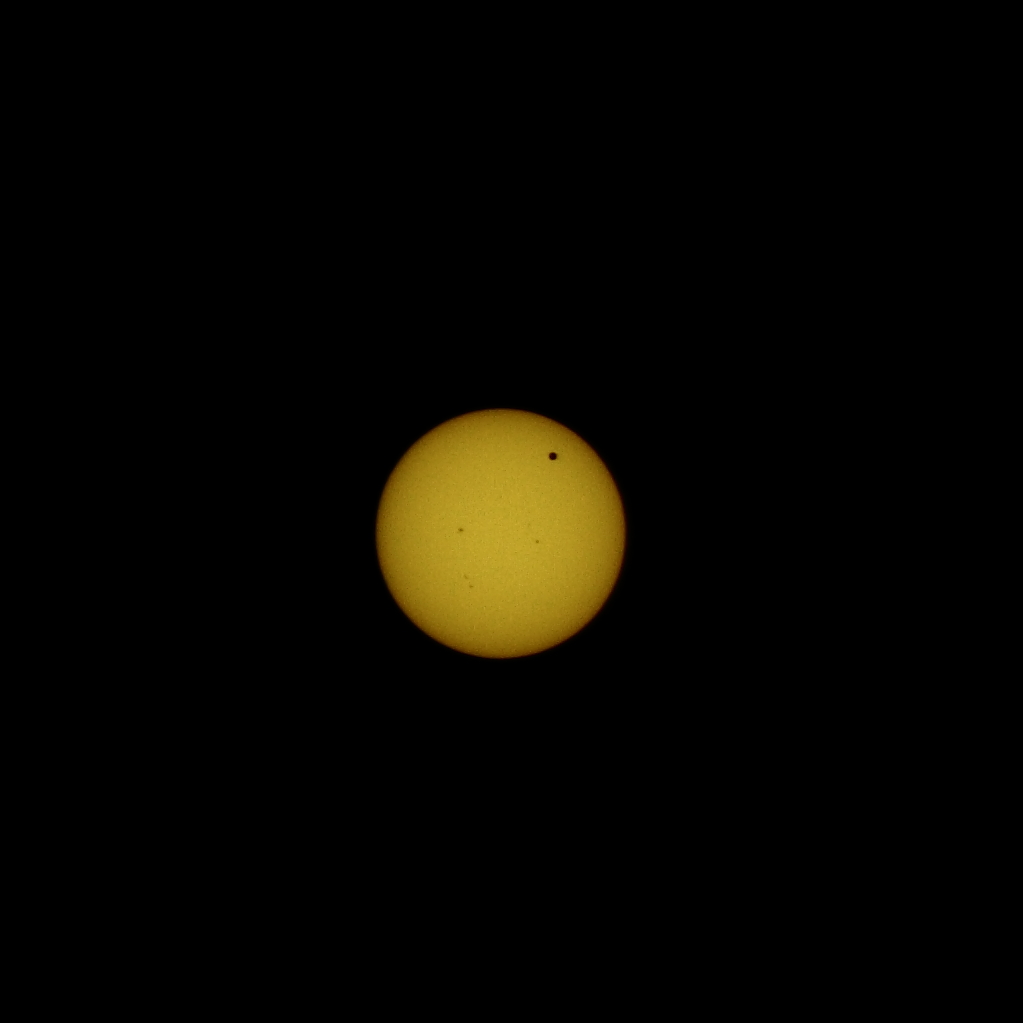 When I started shooting in lower light with the 7D I always thought it was way too noisy at high ISO with a LOT of shot noise, particularly in the red channel. It was more than my 50D by a pretty large margin. I'll always wonder if shooting that transit of Venus had anything to do with it.

You can indeed photograph an eclipse through an ND filter. I actually photographed a partial solar eclipse with an f/22 setting and a HiTech 10-stop filter, producing the following result: 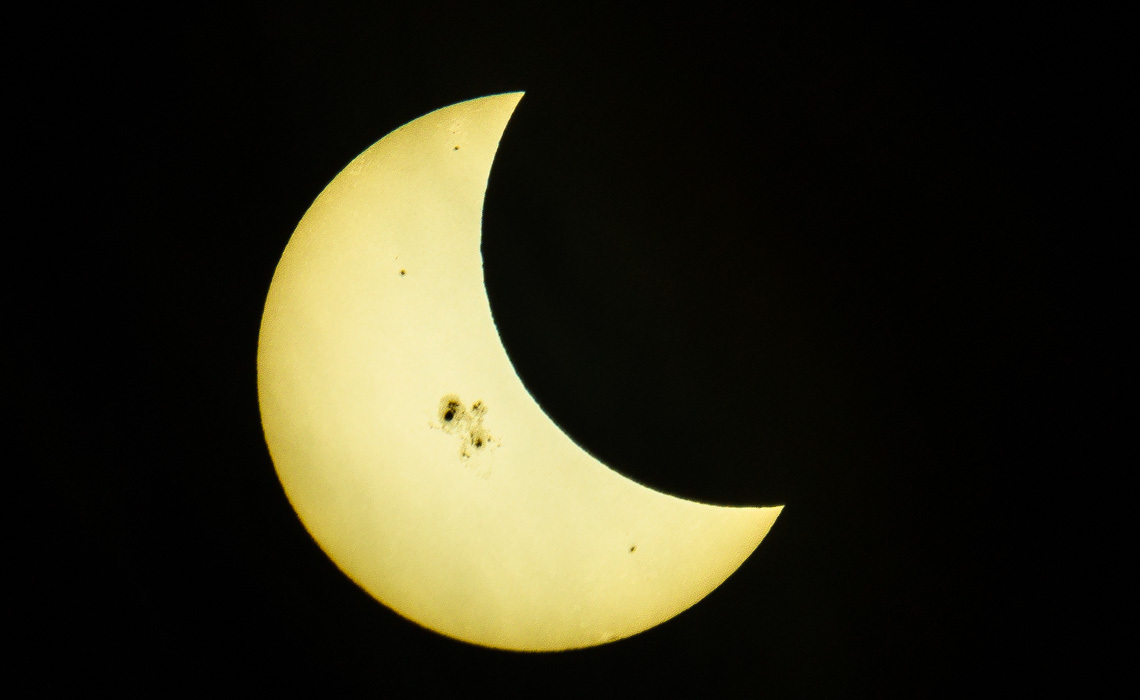 It's no Lunt Solar scope image of an ultra narrow band Ha emission, by any means. It does show surface detail, plenty of sunspots and sunspot structure, and some other surface structures around the periphery. You probably won't get any prominences or other flares this way, as your still basically imaging in broadband and it generally requires a pretty narrow band filter to reduce surface brightness enough that the much dimmer prominences can be seen.

However, it IS possible to use a 10-stop filter to photograph the sun. There are a few obvious things that still must be stated. Don't look at the sun through the optical view finder. With 10 stops AND partial occlusion by the moon during an eclipse, it is possible to visually observe with a 10-stop filter, but the sun is still VERY bright. Use live view to frame and focus. A 10-stop filter is only part of the cause of reduction in light...stopping the lens down as much as possible is the other cause. I was at f/22 in this image. Stacking ND filters will certainly help, but that can also degrade quality. Even the use of f/22 can degrade surface features. You might experiment a bit, find the best combination of ND filters and f-ratio to give you the sharpest details.

Now, if you have the option, the best bet is to get some solar film and filter properly. I've purchased some myself since I took this image. At the time I had almost forgotten about the eclipse, and the 10-stop ND was all I had, and I winged it. With proper solar film, you can get much better detail, as the filter ratio is about 100,000:1 or so.

Just got of the phone with Wex, I asked them the same question and their answer was "we would not recommend it because the sun requires a filter in the region of 100,000 stops.Yep that's what I thought, 100,000 stops, might as well stick a brick in front of your lens. I've just looked directly at the sun through my Lee big stopper and I feel sure that with a fast enough shutter speed there will be no problem. The alternative is to spend over £150.00 for a dedicated filter that won't be used again for years. Just my point of view.

Stupidly, before doing much research, I ordered an 67mm adapter and a set of 4 filters (ND2, ND4, ND8, and ND16) for my little-used SX60-HS. When they arrived earlier today, I stacked all 4 filters onto the camera and took 3 pics of the Sun (F8 and 1/2000 sec). I saw that the Sun was still too bright, so I knew I'd need even more filtering. Later I read all the warnings, but my camera is OK. I've taken a few pics since and they seem OK. Whew.

18
How to photograph a partial solar eclipse?
6
How do rear gelatine filters compare optically with "regular" front-mounted filters? Where to buy them? How to cut them?
0
Telescope Solar Filters to fit Canon Lenses
4
How can I get prevent ghost sun images when shooting with a solar filter?
3
Can I use a 10 stop + 8 stop ND filter to photograph a solar eclipse?
0
Can I safely use a 10-stop IRND (Hoya SOLAS) filter to photograph the eclipse?
4
Why do my pictures with a 100000 ND eclipse/solar filter have purple haze?
13
What kind of filter do I need for safe sun photography?
3
Choosing between 9-stop and 10-stop ND filter for flowing water long exposures
1
Improvised neutral-density filter