Can I use rear curtain sync in bulb mode?

I have an idea of shooting a low key photo of dancers using rear curtain sync and tracing them with continuous lights to get the classic trails of the dancers as well as a sharp frozen picture using flash along with the rear curtain sync feature.

Can I use bulb mode along with rear curtain sync so I don't have to time the exposure to their movement? This is of course not impossible without it. They are dancers after all so they can definitely sync to music and end up in the right spot at the right moment. It would however give me interesting possibilities if rear curting sync in bulb mode was possible.

Yes you can, but as far as I know, you cannot do it with the 622C alone. You can definitely do it with the addition of a 622C TX. I took a couple of my daughter doing exactly what you want to do. 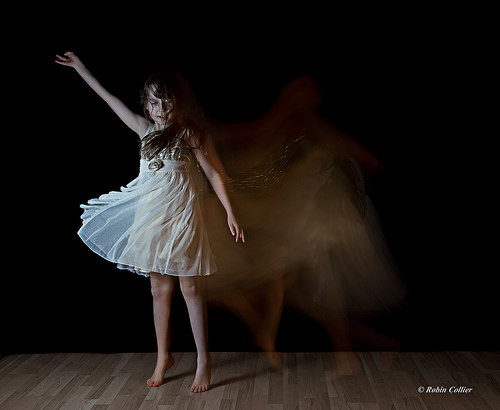 There is a description of how I did it with the photos on Flickr.

I think that firing the flash manually gives you a lot more interesting possibilities than rear curtain sync.

If you want to have rear curtain sync, just push the (flash) button at the end of the exposure (just before releasing the shutter button)

That being said, you can fire the flash at any time during the bulb exposure. If a dancer jumps, you probably want to freeze him in the air and not at the end of the exposure when he/she is on the ground again, which rear curtain sync would do.

You can even fire multiple flashes during the bulb exposure, freezing the dancer multiple times in one image. To do this, you either need short recycle times of your flash or multiple flashes. (or dance moves that are slow enough to allow the flash to recycle)

In fact, using a stroboscopic flash for this kind of shot is also possible (and people do this).

You can, of course, trigger the flash manually at any time during the bulb exposure using the flash's test button (see null's much better answer on this).

Not the answer you're looking for? Browse other questions tagged flash bulb-mode second-curtain or ask your own question.

16
Why does the flash freeze a picture?
6
How can I get a clear subject with motion-blurred (traffic trails) background?