All the things that I did wrong with this shot [closed]

First time ever using flash, so I put the flash with softball attached to it on the ground on the right side of the girl ( left side of the picture ) and took this shot. I would like to know all the things that I have done wrong in this picture from lighting, lighting angel, white balance, location of light source, composition, etc... so I can improve and try the same one more time. 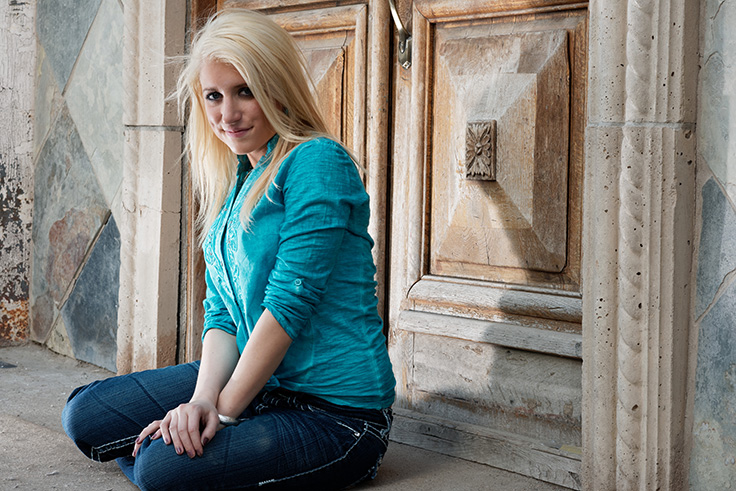 The light is on the ground, which means the underside of her face is lit, which is quite different than we are used to seeing people lit (above, from sunlight or ceiling lights). Not sure it's a real problem here, but it's generally unflattering.

Light is from an extreme angle from her right. Not necessarily bad, but it leaves most of her face dark, especially the eyes. Her chin, one cheek and parts of her hair and top are bright, but the rest of her face is relatively dark. The part of her hair that is lit would look nice contrasted against a darker, plainer background, but it gets lost in the background a bit.

You are in fact throwing more light on the background than on your subject's face.

Probably the light is too bright as well, if you compare the highlights on her right cheek vs the left. Maybe dial down the power a bit. Would probably be more flattering with less contrast and angle.

In addition, there are a lot of lines and textures in the background (columns and door) that distract the eye. They are bright and have strong lines. Unless the subject of your image is the door, then I'd frame it much tighter and remove all that distraction.

My eye gets drawn to the right half of the image, to the small carved square in the middle of the door, the vertical column at the right, the texture in the corner on the left side of the image and the lines of the panels on the door.

I think your composition is not very well thought out. She is haphazardly positioned with a distracting background. But I know this is mainly a test of your flash. The lighting would probably be ok on a tighter shot with dark, plain background.

I would raise the light up, put it on a stand. Move it to 45 degrees off the camera axis or less, not so much from the side. Dial down the power. Move her away from the door so that the door is less in focus and less light is thrown onto the door.

Not the answer you're looking for? Browse other questions tagged flash off-camera-flash shooting-technique photo-critique or ask your own question.

5
Is this sensor ghosting, or something else?
3
How can one light something in the foreground well while metering for lightning in the background?
2
How to shoot an event in a long living room with a large french window on the shorter side?
6
Reducing ambient color while preserving sharpness with a flash in concert photos
1
Why does using the flash mess up the white balance?
8
What went wrong with this concert photo and what could I have done to make it better?
1
Why do pictures turn out dark when I shoot with my external flash?
9
Shooting glass product with embossment
5
Shadowless Product Photography with illuminated bottom?
0
Options for a 5-flash 4-group lighting set-up using Canon (compatible) gear