What kind of lens is typically used for these type of night street shots?

I've been trying to duplicate the depth of field like in these photos on snowy nights and I'm not getting comparable results. I'm using a 35mm prime lens at f/1.8 on a D3100. So my question is: Are these shot using a telephoto lens to get that shallow depth of field? 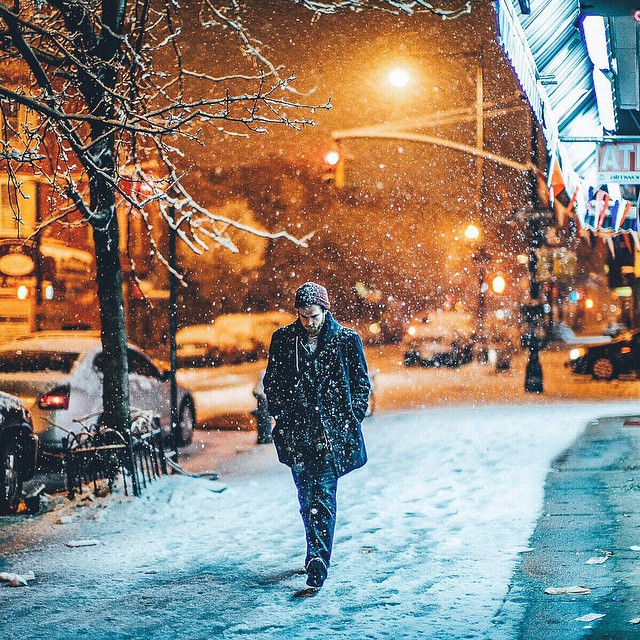 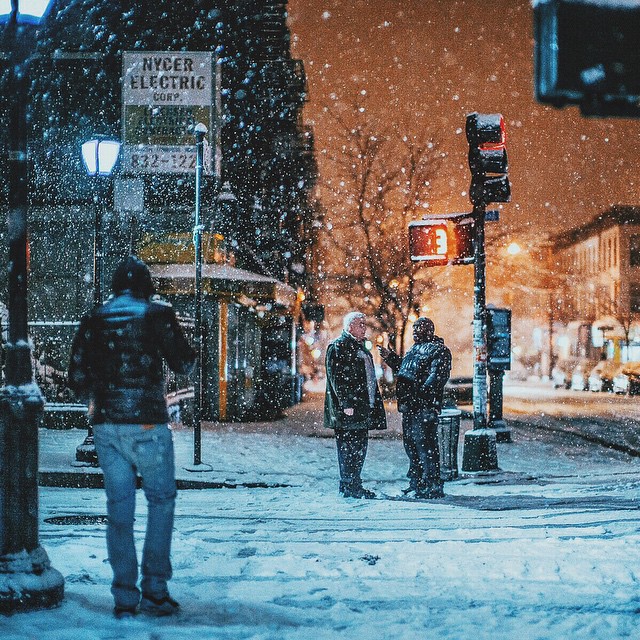 I'm going to take a wildass blind guess, but doing an image search on Google which led to WrongRob's Instagram and then his website, it looks like he shoots with a Leica M, which has a full frame sensor in it. So my guess would be that the thin depth of field may have been created with a Noctilux 50mm f/0.95 lens. Whatever apertures he's using, if he's shooting with a wide or normal lens at regular subject distances, he's using an extremely wide aperture: probably f/1.4 or wider.

I can only achieve a similar look using a 5DMkII with an adapted Olympus OM-mount Zuiko 50/1.2 wide open, and the other side effect of having such a wide aperture when shooting "available dark" means that you can gather enough light for the exposure to make things look like they're lit, when you're just using street lamp illumination. A 35/1.8 lens on APS-C can't achieve the same DoF unless used much closer to the subject, but at that point, would be unable to do the same framing. I don't think a telephoto lens was used--the perspective isn't "flattened" enough to my eye (well that and the fact that Leica street shooters tend to favor wide-to-normal lenses). The look is actually reminiscent of medium format. I might have wild-guessed Brenizer method, except falling snow would make that problematic.

The amount of background blur you get relies on a number of factors, of which aperture is possibly the least important, but the most easily controlled. These factors are:

A larger format sensor/film can appear to have a thinner depth of field, because to achieve the same composition as you would on a crop body, you'd either have to a) use a longer lens, or b) get closer to your subject, or both.

The lens used would have a reasonably large aperture (low F number). This gives the effect of a relatively narrow depth of field and also allows more light to get to the sensor, making it easier to capture a correctly exposed image.

The focal length used would be in the 'normal' range (somewhere around 50mm for Full Frame, or 30mm on APS-C), as opposed to wide angle or telephoto, as this produces a natural looking perspective, rather than making either the background or foreground appear larger than normal.

From the images, there is no real way to ascertain whether a zoom lens was used.

It does look a bit like a tilt-shift lens, but I wouldn't be 100% positive.

I'd say it was taken with a 50mm/<1.2 lens on a full-frame sensor. With a 35mm and an APS-C sensor you would need to be closer to the subject in order to achieve that field of depth. A flash might have been used, but I think you do not need any for that kind of shot.

If you want shallow depth of field, you need 3 things: wide aperture, long focal length, large sensor (eg. full 35mm frame or 120/220 film). Out of those, only aperture can be varied freely, because both sensor size and focal length show on angle of view, changing your composition. Longer focal length and larger sensor somewhat cancel each other. This sadly means that while 50mm/2.8 on DX is same angle of view as 35mm/2.8 on DX but it's NOT same depth of focus.

The most common mistake people make is fixing on large aperture, while long focal length has MUCH bigger impact. 135mm/2.8 is thin as paper, while 35mm/1.8 is still pretty much "everything in focus".

With your D3100 half-size sensor you can probably never get the "normal angle, shallow depth" look, but you can go for "shallow depth" alone using longer lenses. Zooms won't cut it, as they are usually very dim. Photo in question is likely to be taken with 85mm/1.8 on FX camera (like D600). With this setup "almost nothing is in focus", which is what you want. Sadly, 85mm/1.8 costs like 450$ alone. This is why "shallow depth" look is so sought after: because it simply screams out "expensive!".

Not the answer you're looking for? Browse other questions tagged lens focal-length depth-of-field camera-settings street-photography or ask your own question.

42
What does it really mean that telephoto lenses “flatten” scenes?
36
What is “bokeh panorama” (also called the “Brenizer method”)?
5
How does using a lens with some focal length on a full frame camera differ from using a lens with “equivalent” focal lens on a crop camera?

6
Will the Canon EF 50mm f/1.4 give better auto-focus results than the 50mm f/1.8?
3
How can you photograph backlit scenes without getting lens reflections/flare?
0
What exactly happens when one turns the focus ring on a DSLR while shooting video?
4
What type of lens is best suited for adventure photography?
2
Is the Pentax DA 35mm F2.4 AL a good choice for street and night photography?