How does physical aperture size relate to f/stop?

There are two lenses on the market I am comparing

If I use the formula for calculating apertures of both the lenses I will use the f/2.8. So for lens

Therefore lens 2 has a larger maximum aperture than lens 1 and therefore capability to allow more light.

But if look at their minimum f/stop values, on the Nikon website, it is 32 for both the lenses.

How can the minimum f/stop values be the same for both the lenses? I do not understand this?

What is the f/stop then, if not focal length/aperture diameter?

"Therefore lens 2 has a larger maximum aperture than lens 1 and therefore capability to allow more light.

This is where your understanding is not quite right. The physical size of the aperture is indeed larger in the longer lens, but it does not allow in more light, because the longer focal length means that the field of view is narrower. This means that the cone of light entering the lens is also narrower, leading to a reduction in the overall brightness.

When people talk about 'aperture' in photography they are almost always referring to the f/stop, not the physical size of the aperture, which is rarely relevant in exposure calculations. 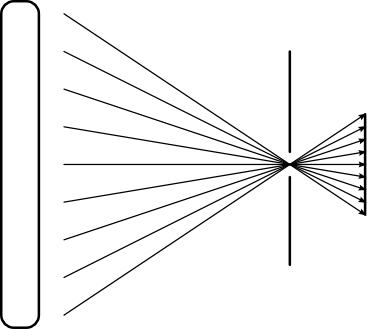 Because this is a uniformly illuminated wall, each of these rays represents the same amount of light. There are nine rays hitting the film.

Now if we move the film back, we get a narrower field of view. This corresponds to the longer focal length of your 105mm lens. 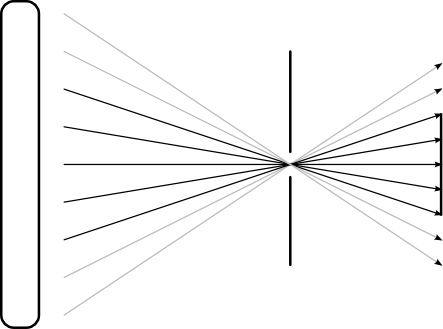 As you enlarge this hole, more light passes though, but you will need to add a lens to focus it if you want a clear picture. However, the basic principle still applies: a longer lens or a narrower field of view means you are capturing less of the light passing through the aperture on the film.

The f-number compensates for this effect, giving us a number which if equal, gathers equal light at the film regardless of focal length. The f-number is calculated by the focal length divided by the aperture's effective diameter1:

Somewhat confusingly, "f" is the focal length, and "N" is the f-number. But it's less confusing if you recall that f-numbers are usually written with a "f/" prefix, as in "f/4". What this means is "the aperture's effective diameter is the focal length (f) divided by 4: f/4".

1: effective because the physical size of the aperture may be modified by the optics around it, and exactly where in the optical path the aperture is.

Not the answer you're looking for? Browse other questions tagged aperture terminology focal-length f-stop or ask your own question.

3
What's the difference between real and effective aperture?

1
After considering crop factor on Nikon D90, which focal length macro lens should I get?
44
What does the number of elements and groups in a lens mean?
12
Does the size of the front glass mean anything?
1
Why does the max aperture change when use Nikon 60mm AF-D Micro on D90 camera?
2
How to fix stuck aperture?
1
Nikon D7000 and Nikkor 28 2.8 is not working together
9
What is the benefit of a wide-aperture lens if you stop it down?
6
Does the maximum aperture vary linearly with focal length?