I want to begin night photography and long exposures with my Nikon F100. I have noticed that in film photography it is very difficult to shoot and get both the dark and light areas well exposed. Especially I have noticed problems in dark areas when the metering is not so precise.

I want to begin shooting at night. I have my camera my tripod and remote control. However I want some advice about what film should I choose. Currently I am using Kodak Portra 160ISO.

What should I do about reciprocity failure?

How can I get sharp results?

My camera has 10 segment 3D Matrix Meter and a choice for spot metering. What should I choose?

In case of spot metering in which part of the frame should I meter, in the darkest areas or in the lightest?

What else would be good advice about night photography and long exposures with film? For example I know that this photo is taken with film: 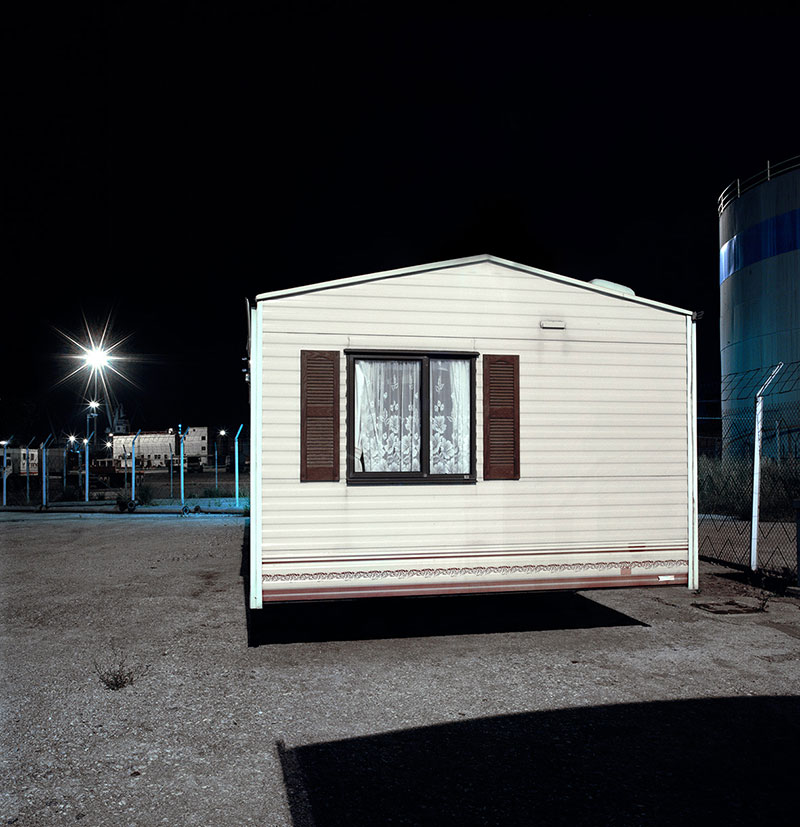 All you can do is experiment, really. Nighttime photography has its own peculiar set of problems, especially where film is concerned, and you really can't rely on anything that looks like an easy recipe.

Reciprocity failure is a thing, and it's variable with conditions (temperature, mostly) and film age as well as with extended exposure time. I don't know if it's still the case, but film used to come with an information sheet in the box that would give you "factory adjustments" for reciprocity failure, assuming fresh film and a temperature of about 20 Celsius, but you would need to bracket your exposures to make sure of getting a good one. (If the info sheet isn't included anymore, you should be able to find the info online.) A half-stop down (0.7 times what you think you need), and a half-stop (1.4X) and a full stop (double) up, in addition to the calculated exposure, will cover most of the variation. Once your exposures get really long (into the hours), then your bracket needs to be bigger. (The usual way of handling that was to use multiple cameras and close the shutters an hour or a half-hour apart. Expensive, yes, but you can't do a four-hour bracketed exposure with one camera in one night.)

To rein in the contrast, you'll need to pull your film. That is, if you're shooting a 160-speed film, you would rate it at, say, ISO 80 (a one-stop pull) or ISO 64 (1-1/3 stops), then specify pull processing if you sent the film to a lab. In other words, you're overexposing to get the shadows and under-developing to keep the highlights from blowing out. That will leave you with a "flat" picture, something like an unprocessed HDR image, that will probably need some attention to print properly, something that's a whole lot easier to do in black and white than it is to do in colour (the printing process has reciprocity failure too, and in colour that means colour shifts, so dodging and burning means adjusting filter packs). If you are getting the negs scanned, the whole process is much simpler in Photoshop (or a similar program).

As for sharp, don't hope for too much there if you have bright lights in your scene. You will get halation (light scattering through the film) around bright highlights when you expose, and development is to some extent "contagious" (areas of film around highly-exposed patches will darken because of all of the activity next to them), so there is a limit to how sharp bright elements next to dark elements can be. You can have the finest lenses and the best technique, but you can't get around the physics of the film itself. (In brighter conditions, the darks are much less dominant so you don't notice the effect nearly as much.) Downrating the film will make halation worse, but whatever you lose there you gain back in reduced development, so it all balances out in the end.

I know... not much of an answer if you were looking for an answer. But it's not a question that has an easy answer, I'm afraid. Heavy bracketing, getting to know the film you've chosen well enough to determine how close the data sheet is to the truth and how much you'd need to pull your film (and when to do that) and reducing your expectations in some areas have always been part of the game.

Reciprocity errors and their recommended corrections are usually described in film data sheets like this one for Portra, but unfortunately, for Portra in particular the information is not helpful (no correction up to 1 second, otherwise, test it on your own).

Sharp results - you obviously need a tripod. If you shoot stars or moon, there are formulas how to calculate the longest exposure that ensures sharp image given the focal length you are using. Not sure if this is your intention, so I won't go to any details. This should be easily searchable on the internet anyways.

As far as metering - an exposure taken with evaluative metering in urban areas will be often influenced by the street lights and other intense point sources and will typically give darker images (lighter negatives) with no detail in shadows. Some cameras can be better than others. Since all depends on your artistic intents, how much you want your photography to look as taken at night, if you are looking for realistic rendering or more abstract, how much the pictures should feel as taken at night etc, there is no rule about metering that can give always the right results. My recommendation would be to sacrifice couple of rolls for testing - shoot with evaluative, with spot and bracket the exposure (e.g. 0 - +1 - +2). Check the results and see what best represents your style and intentions.

28
What medium format film camera should an SLR guy look at?
4
Long exposures without turning night into day
10
Does reciprocity failure (Schwarzschild effect) exist in digital photography?
3
Improving My Night Photography Shot with Post-Processing
2
My DSLR always says "subject is too dark" — how can I get started with night photography?
7
How do I meter for film photography?
7
Scanning negative 35mm: color accuracy, color balance, film bias
7
What exactly does it mean to say that a certain film or process 'is tolerant' or 'has latitude'?
1
What kind of equipment and skills are needed to take shots like these?
1
Which step/component of film photography matters most when trying to get a very vintage, grainy look?