How to remove fog while shooting and during post-processing?

Recently I came across the following problem:

I went hiking and since it's winter there was some fog. I took the picture below and wondered how I could have minimised the fog in this shot to get a clear, sharp photo of the landscaepe.

What measures can I take while shooting? And what can I do in post to minimise the effect of the fog? 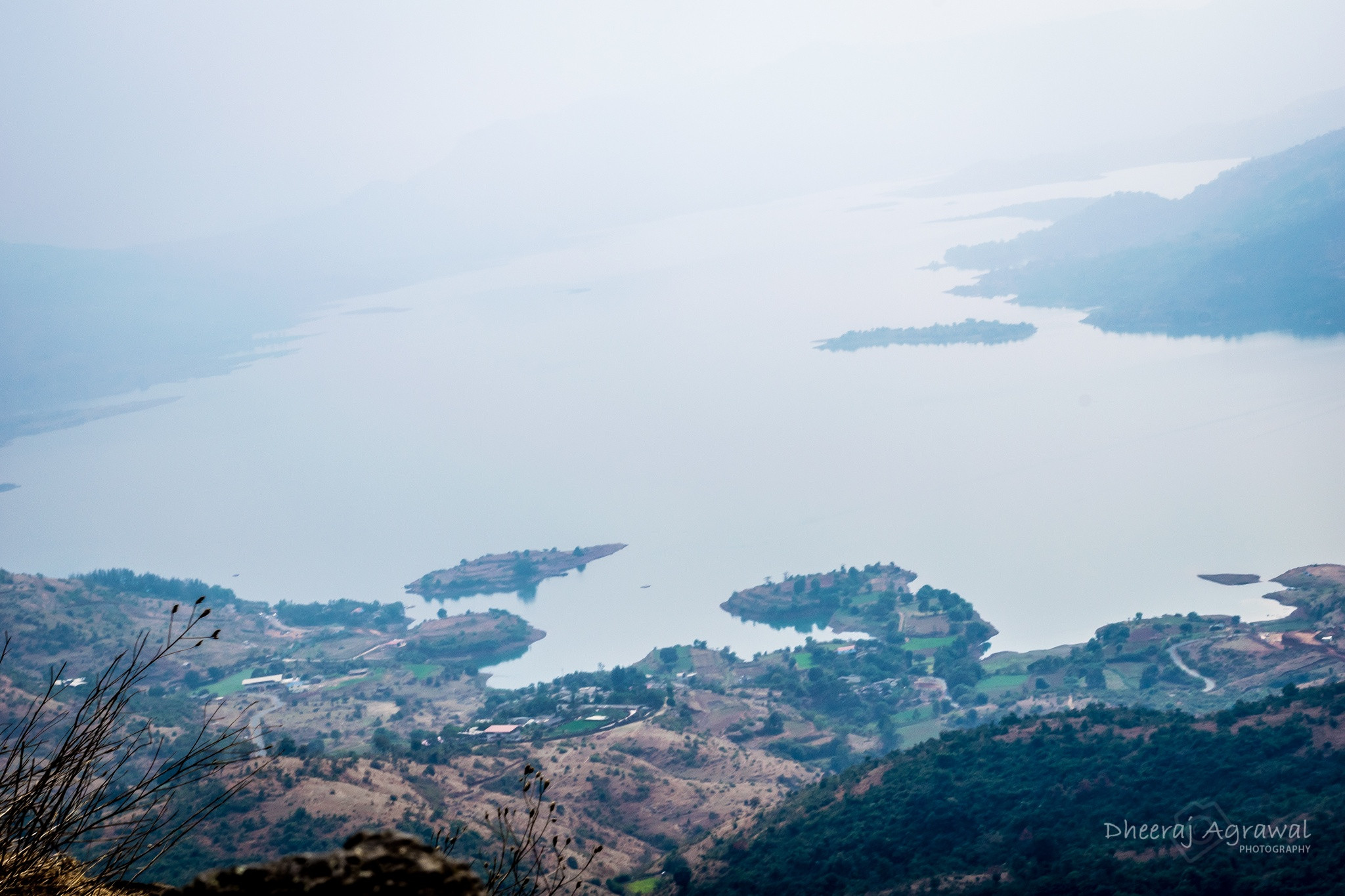 The first thing to know about fog is that its effect is more pronounced with distance. The best is to get as close as possible. Do not zoom in, get closer instead. Don't fall into the cliff though!

Second is that fog reflects light. Do not flash it. Shoot it from an angle where the fog receives the least light from other sources, such as street lamps.

Increase contrast, in camera, if possible. You may be able to dial in an additional increase for contrast in shadow areas, depending on your camera (most Pentax DSLRs and Olympus mirrorless can do this, a few others can too). On some Nikon DSLRs, you can also increase Clarity which does wonders for fog. A bit of an increase in saturation can help too. This is where you have to experiment.

When you find good settings, save them. Fog is quite a distinct case that most of my DSLRs have a User setting which I have made specifically for fog. Don't forget to switch bag to normal once the fog is gone.

While you still have a low-contrast image, your histogram will not reach both sides. This is a good time to expose-to-the-right (ETTR). It will give an image which looks probarly overly bright but you will have more latitude do correct the lack of contrast in software this way. Since this change affects exposure, it will help even if you shoot RAW or DNG. If you do not shoot JPEG at all, the previous two paragraphs do not apply.

Once the image is captured, repeat the third paragraph with an image-processing software. You will have the chance to increase contrast and clarity, plus adjust the final exposure to your liking. For an image which already had good contrast overall but still does not show much details in foggy areas, you can fine-tune results via the curves too.

Know your camera's sharpness settings, it often has a -5 to 5 or 0 to 9 scale. The default is around the middle. You can increase a few steps to improve sharpness but too much and you will see sharpening artifacts, so learn that limit. If you go too far, even noise gets sharper!

Your options are limited; the fog is an opaque item and post processing can only do so much.

You can enhance or reduce the impact of the fog by adjusting contrast. It may or may not help much, it may impact other parts of your image. but effectively, the fog is turning the image into a very low contrast image, so increasing contrast can reduce it's impact. Also adjusting white and black points (another way to adjust overall contrast) might help. One, the other, or both techniques in combination might be useful for different images.

Step 1: Duplicate layer As we don't want to do any destructive editing, make sure you duplicate your layer (Layer>Duplicate Layer) and rename it.

If it's foreground detail you want to bring out of the fog, you don't need to do this first step.

Step 3: Exposure correction To pull the foreground or background out of the fog you'll need to adjust the exposure. To do this go to Image>Adjustment>Levels. Look to the right of the histogram and you'll see there's a large gap between where the graph ends and the white slider sits. Drag the slider in towards the end of the histogram until the object you can't see becomes more visible. You can do the same with the black slider but be careful how far you drag it as it can darken the image too much. Once you're happy click OK.

Adjusting levels Adjusting levels Step 4: Unsharp mask Next we are going to give the scene even more detail. To do this go to: Filter>Sharpen>Unsharp Mask. Don't over-do the Amount, 100% was fine for our image, and keep the Threshold and Radius figures low. Then Click OK.

Step 5: Up the contrast The shot still looks a little too foggy so we are going to up the contrast by going to: Image>Adjustments>Brightness/Contrast. Pull the contrast slider to the right, we moved ours to 80. You may also want to adjust the brightness but this is down to personal taste. Remember you can always move the sliders around and re-set them if you don't like it. Once happy, click OK. Contrast adjustment

When you've adjusted the contrast your image is complete. Take a look at the finished images:

I want to corroborate what chuqui said above and add a bit more detail. Fog works like adding white to all pixels, and it reduces both your sharpness and contrast. Any algorithm that tackles one of these two can be helpful to you. The classics are overall contrast, unsharp mask (try a large radius then a small one) and smart sharpen. But there are also more sophisticated proprietary methods like lightroom's (or camera raw filter's) clarity, capture one's punch, instagram's lux, and most importantly color efex pro's (nik software) tonal and local contrasts. These methods are all based on combinations of those basic algorithms mentioned above, and in my experience work wonderfully in some cases. The reason is that these tools are optimized for improving contrast either only in adjacent pixels or only within specific tonal ranges, and by doing this they boost edge clarity without really driving the overall contrast and saturation off the chart.

By the way, on a subjective note I think the beauty of the shot above lies partially in the smoothness of the fog in it. You may not want to reduce the fog too much. It will make the picture look fake and decontextualized. Fog is your friend there. Play nicely with it and try to get smoothly fading color gradients out of it, while sharpening a little bit.

You can improve the image you capture by upwards of 1% (very nearly 2%) in quality by using a polarizer if there is fog without much overcast, and perhaps by an additional 0.05% using an enhancing filter to cut the excess blue a bit. Anything more than that means shooting in the weather you wished were happening at the time - trying again another day, or earlier/later in the day if fog is a regular thing at that time of year. Or you can let the fog build and take advantage of that. But if you're looking for a trick to let you see through the fog, there isn't one.

I don't think your camera settings can do much about it. Changing the way to take this photograph will influence both the foggy area, but also the much clearer area you see closer to you. Make sure not to zoom as posted by Itai is good advice, every meter between you and the subject contains fog, zooming will not fix that.

In Lightroom I use a Graduated Filter with increased Clarity/Contrast on the foggy area. On top the effect should be strongest, and try to set the graduated filter to the correct angle and depth. If you use a strong effect sometimes you need to adjust white balance as well, because the effect can cause the affected area to be too blue.

It takes a bit of fumbling around, but the result is quite impressive for the amount of work you need to do. I've used this effect a lot.

Not the answer you're looking for? Browse other questions tagged post-processing photoshop filters landscape fog or ask your own question.

2
What is considered "sharp enough" w.r.t the landscape pictures from a DSLR with F16?
7
Does fog enhance the colours during dawn and dusk?
4
How to clean a multi-coated filter and not damage it?
2
Is this xray fogging on my film? Or something else entirely? (with examples)
7
Capturing large monuments and landscapes
2
How to soften harsh shadows during post processing?
3
Improving My Night Photography Shot with Post-Processing
4
Shooting large tree from a distance: resolution/details issue
7
Why are my sunsets not turning out well?