How were photographs printed in newspapers in 1929?

I am curious as how this and other similar things were printed back then. How were the images printed on the advert? Seems to me like this wasn't possible back then! 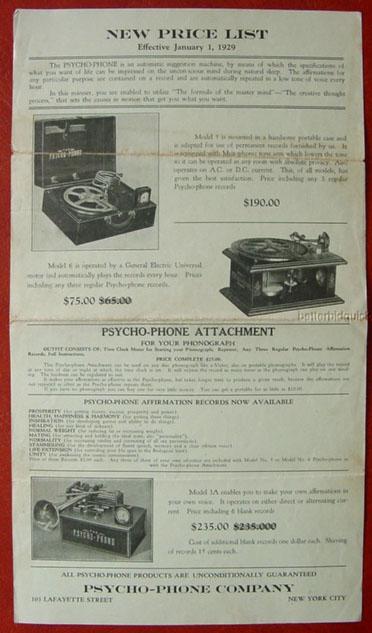 Can you guide me to any key terms I can research?

The first photographic images printed in newspapers were actually wood engravings meticulously hand-copied from a photograph printed in the normal way. By the 1890s, however, prints were made in essentially the same way they are today: through halftoning — printing different tones as patterns of small dots varied in size and spacing. By the 1929s, this technique was relatively sophisticated, although arguably the image quality afforded by hand-engraving was still much higher, but hand-engraving also required considerable artistry and time (and therefore expense). More sophisticated ink prints could be made through photogravure, and while those were used for high-quality books, that process was also far too expensive for newspapers, advertising flyers, or cheap magazines.

Halftones were made like this: the original printed photograph was re-photographed through a glass screen with a pattern of tiny apertures, onto a film or a plate. This was then developed at very high contrast, resulting in dots which varied in size according to the intensity in the original. This, in turn, was used to make a sort of contact print on a sheet of metal using a material which would harden when exposed to light. The rest of that material was then washed away, and acid etch used to dissolve the bare areas between the dots. This resulted in a plate which was used in the printing press. (It'd be fastened to a wood block and locked into place along with the type on the page.)

If you have a higher-resolution image, or the original, look closely (zoom in, or use a magnifying glass) and the halftone dots should be readily apparent.

Here's a crop from a postcard from around 1910, clearly using a very simple single-screen halftone process: 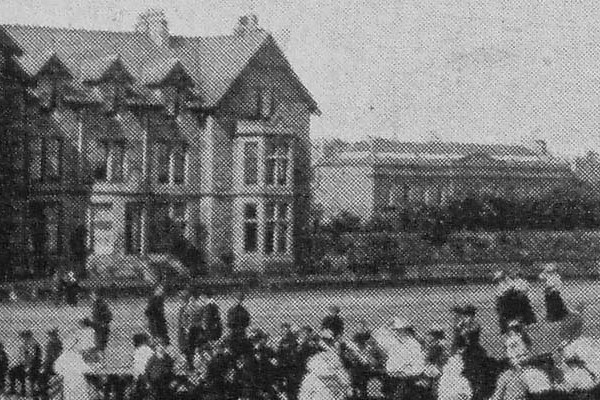 (This image is grayscale, and wasn't scanned at high enough resolution to make it possible to convert back to pure black and white without losing detail, but if you were able to look closely at the original, you'd see that there's obviously no different tones of ink — just the black.)

A more sophisticated method involved doing this multiple times with screens of different sizes, but that didn't become common until the 1930s — after your stated time. By the 1970s, this technique was basically replaced with photo offset printing (where the whole page, text and all, is transferred to the plate photographically), and of course CMYK printing added color, but the fundamental approach of halftoning remained — and does today, although the screen is now almost always digital.

If you're interested in this kind of thing — and the development of photography as a physical art overall — I highly recommend The Printed Picture, by Richard Benson, which covers this and many other print processes from the Renaissance to now. If you're looking for more on newspaper printing in specific, searching for more about halftones, letterpress, and offset printing should get you in the right direction. Encyclopedia Britannica (still a thing!) has a nice aricle on photoengraving which covers this process as well.

I was apprenticed to a photoengraving company in 1946.

We used the Colodion or Wet plate process to make halftone negatives and a glass cross line screen. Newspapers used a coarse screen with 55 to 75 lines per inch. Magazines used from 100 lpi to 150 lpi depending paper and press used by the printer.

The glass plates were hand coated with iodised colodion and sensitised in a bath of silver nitrate. After exposure the plate was hand developed with a simple developer of iron sulphate and fixed with pot cyanide. The plate was then intensified with copper, silver and iodine intensifers. After clearing the stain and reducing slightly with weak cyanide the plate was blackened, washed and dried.

In the early fifties we were able to buy a new type of plate made by Kodak or Ilford and called Kodalith or Ilfolith. They required a special developer to give the ultra high contrast and density. The clear parts were free from fog, unlike normal photographic emulsions. The wet plates were plain sheets of glass and we made all the chemicals by hand. After the job had been completed, the glass plates were cleaned off and used time and again.

By the 60s the glass ruled screens were replaced by contact screens, which were made photographically and held in close contact by a vacuum baseboad. Some of the contact screens had square dots screens and others had elliptical dots which tried to reduce the jump in the 50% dots.

I was still making halftone negatives when I was 65 years old. My old mahogany and brass camera had been replaced by a computer controlled camera that was completely automatic and the films processed in an automatic film processor that developed, fixed and dried in 4 minutes. After I retired, I continued working at home with a scanner, sending the images by the internet to my old employers.

Not the answer you're looking for? Browse other questions tagged printing history or ask your own question.

5
How did people showcase their photographs before the Internet?
6
How to calibrate image darkness (blacks and shadows) between Lightroom and printers?
2
How to restore as much detail as possible to a scanned image of an inkjet-printed page?
6
How has the dynamic range of black & white prints changed in the last 70 years?
7
1960s-1990s third party lenses - why was the "lowest tier" cheaper to make?
5
(How) were FoVs discussed before the 35mm became de-facto standard?
2
Photobook printing – does the text get printed differently?
1
How can I find out what the printed numbers mean on the back of an older photo?
1
How do I ensure that the colours printed more closely align with Relative Intent in Lightroom?