Question as per title; how do I soften harsh shadows during post-processing?

Yea I know I should probably get it right in camera, and probably use a flash, so I hope no one tells me that. The story is I forgot to bring my flash out to a motor exhibition to photograph models (big mistake on my part), and the installed lighting in the halls really falls on the models in really bad ways, and it creates really harsh shadows in instances like this 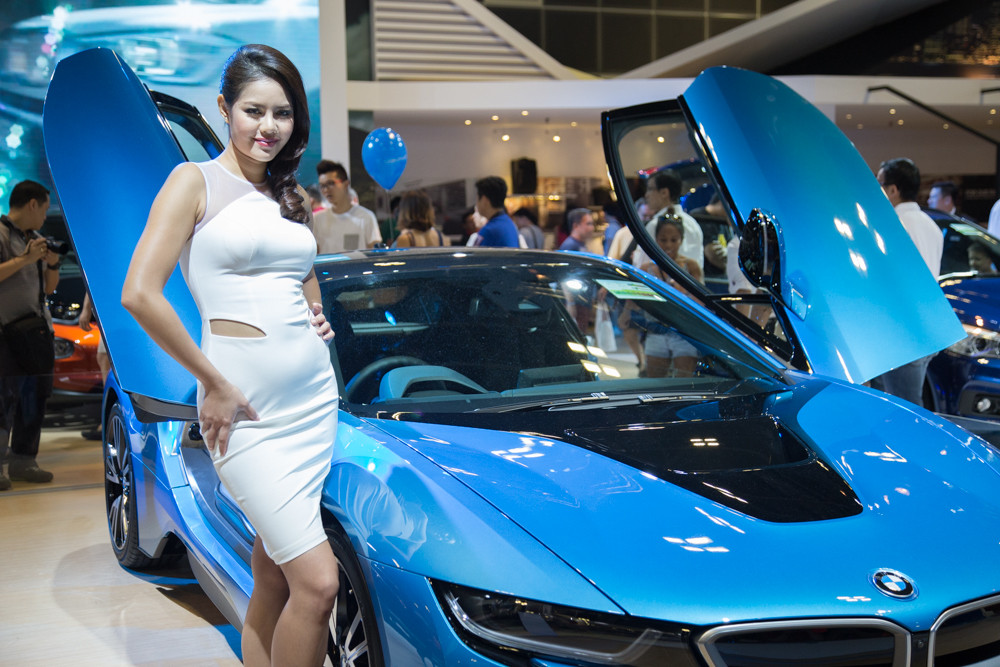 The shadows around the eyes and at the neck area are especially bad. So I was wondering what I could do to reduce the shadows and generally improve this picture in Photoshop or (more preferably) Lightroom.

I don't know of any "easy" way to fix an image like this. I don't know of any way that could be done purely in Lightroom either, although you could do some tweaking with the shadows and highlights sliders before bringing it into Photoshop for the full correction. It is possible to fix it, however, using a combination of dodge/burn for selective shadow and highlight recovery, and a multiscale soft contrast technique.

First off, here is my version of your image (just processed from the JPEG you shared, and done rather quickly, so certainly not ideal): 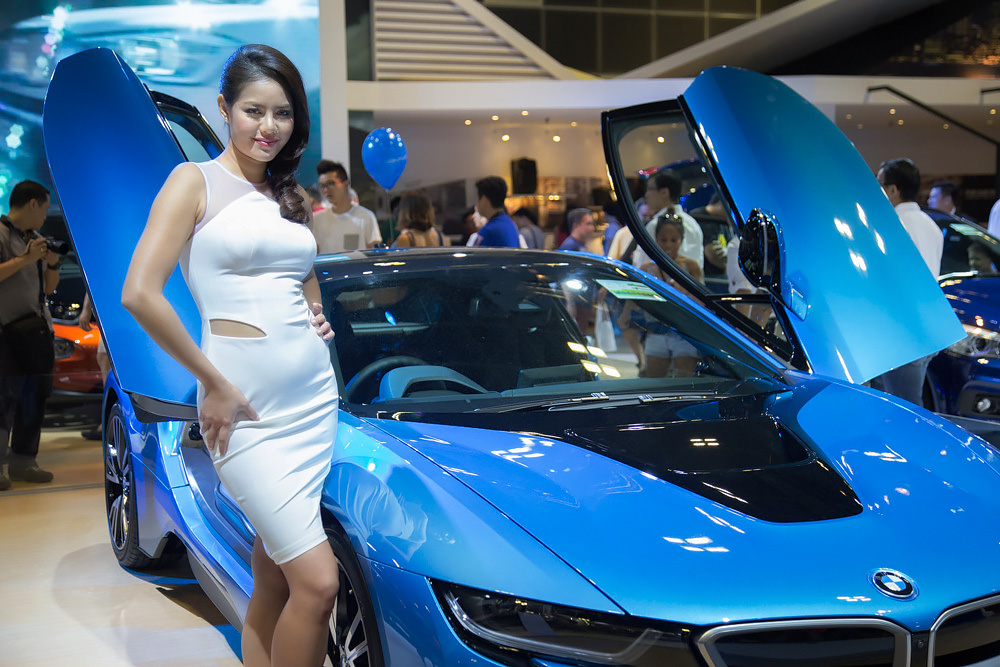 You should notice a few things. First, the background is a bit darker, making the foreground and the model pop a bit more. The color in the car has been enhanced a little. And, the shading on the model's face should be improved. Here is a before and after (before left, after right): 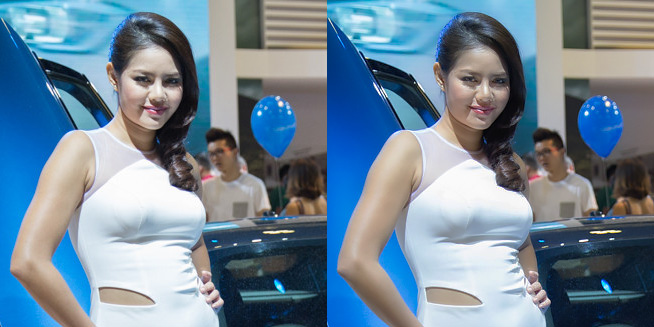 The changes are subtle, but effective, I think (and they could be much more effective if you have the original RAW data to work with, instead of a JPEG). Note the falloff into the shadows around her neck as it goes back into the darkest shadows. Note the lighting on her face. Also note the tonality of her dress.

This was accomplished in a series of dodge, burn, and soft contrast adjustments in layers, many with layer masks. I don't have any technique site to direct you to, I simply processed to achieve my goals. Here is the procedure I followed. 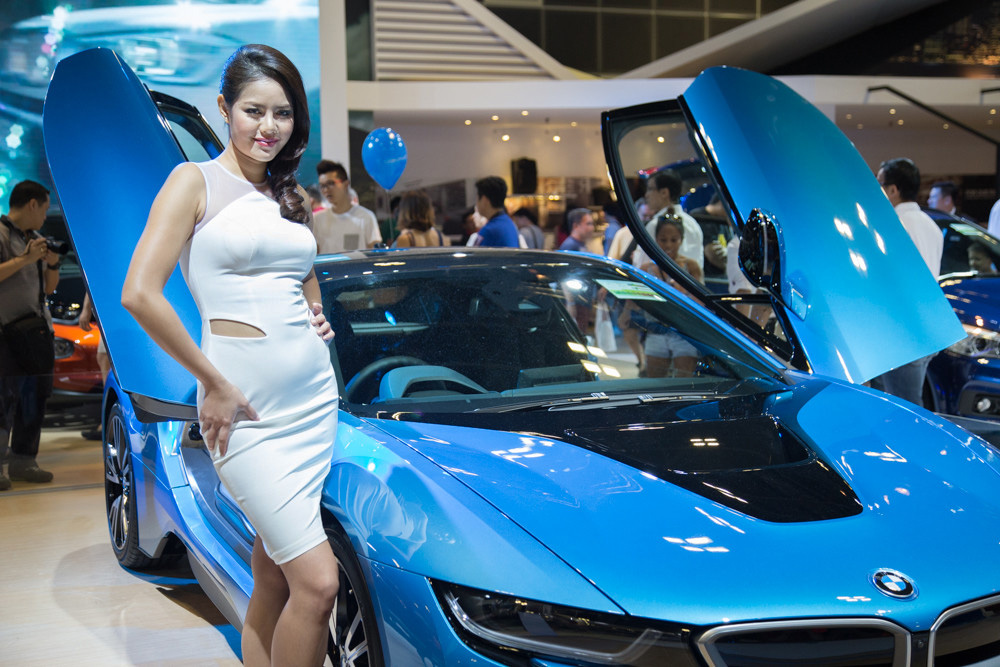 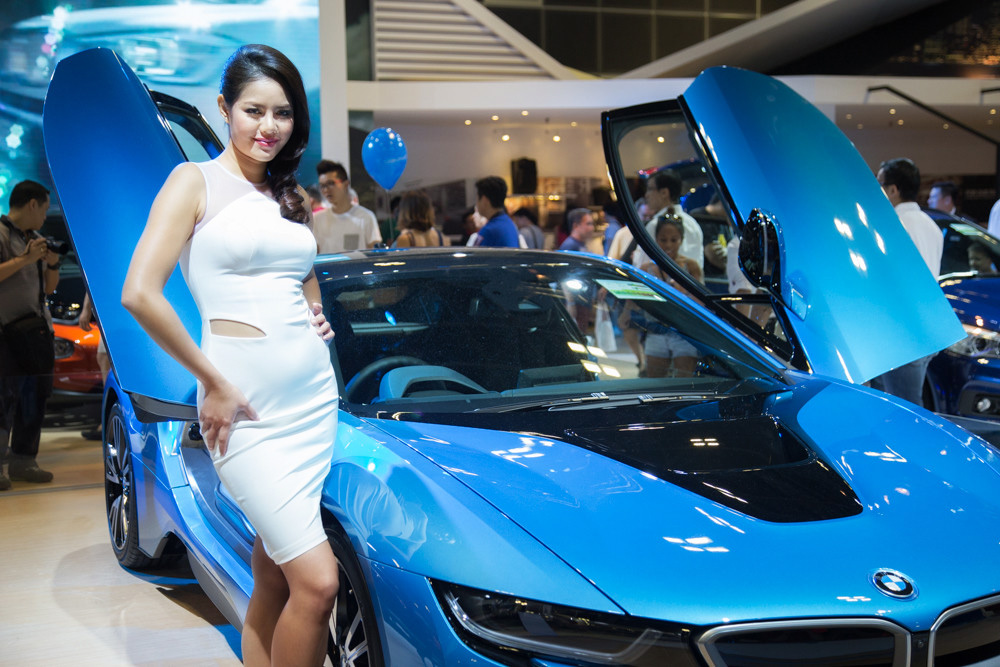 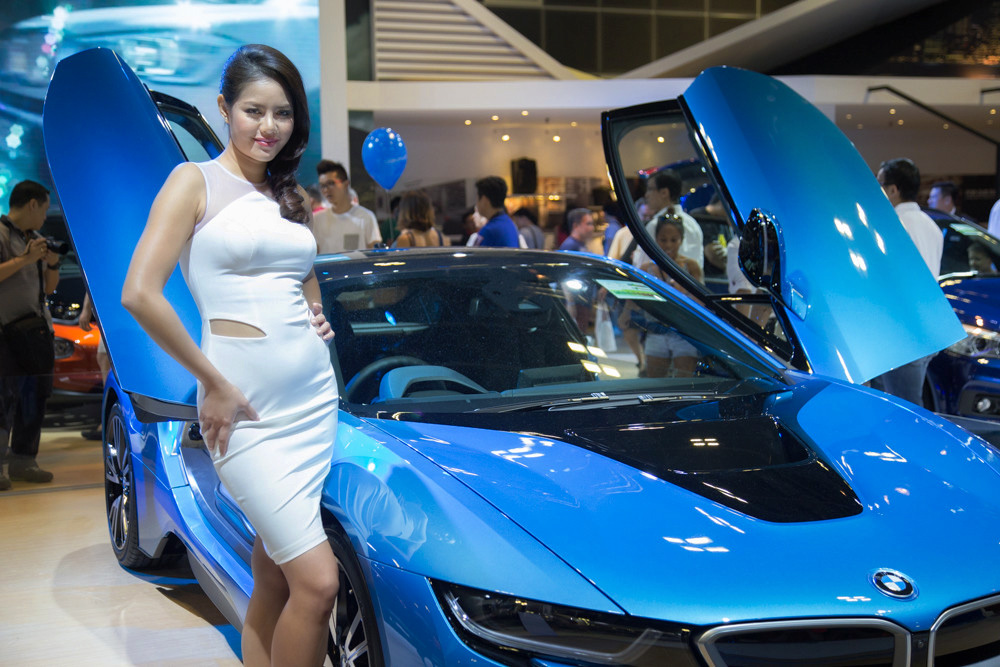 Soft contrast is a great way to smooth out tonal transitions. It won't correct hard shadow edges, but it will help mitigate the tonal grade across them. The application of multiscale soft contrast techniques like this will usually increase contrast in a dramatic way, so it is important that you mitigate that by burning bright areas in a layer before you add the soft contrast layers. This will pre-darken those areas, mitigating the brightening effect. I applied a light amount of burning to the model's dress and face. Too much and compression artifacts showed up, and the highlights were heavily clipped in a few places.

You will also often get deeper shadows, however the falloff into those shadows will usually be quite superior. You can mitigate this with some dodging in those areas before you Copy-Merge the base soft contrast layer (that is simply so you have a common layer to copy from for each soft contrast layer). I did light dodging in this case, as due to the fact that the original data was a JPEG, too much and it started to fall apart.

With original RAW data loaded through ACR or converted to TIFF, you should have MUCH more freedom to dodge and burn. You could also apply some highlight and shadow sliders in Lightroom or ACR before performing the steps of my procedure above to mitigate both ahead of time (particularly the highlights, shadows are probably better controlled with dodging as you can do it selectively and locally, thus avoiding any loss in global contrast.) In the final image here, the highlights are still fairly hot, but the model's dress has a bit more detail. Her face, I think, is a lot more pleasing with the softened highlights and smoother shadow falloff around her neck.

Photoshop has a Highlight/Shadow adjuster that is very handy for exactly that. In ACR or Lightroom, you have better control and the labeled sliders and histogram zones are easy to understand.

In dXo's raw converter, it magically figures it out, but you can still fiddle with it. Check out their free trial, and run your image through it.

Since you mention the face, there's another program (a few actually, but one that's affordable) for portraits and any faces in the shot. It uses machine vision systems to make a 3d model of the head (with a little input from you to make sure the points are lined up) and then can relight the model with proper studio lighting and soft fill, and apply glammor makeup and take 10 poinds off, reshape the nose, enlarge the eyes and change the color, etc. Again, it has a free trial. Search for names with portrait in them. If anyone knows which one I'm thinking of feel free to edit.

As mentioned by jdlugosz your first line of attack is going to be the black and shadow sliders in LR 5 (you'll have much poor results in lightroom 4 or older), but as you boost up the exposure in the blacks you're going to likely be adding in a bunch of noise. It's going to be a challenge fixing it very well, but here's my line of attack:

Globally, do what you can to clean up the image, set the white balance, work on the background shadows and etc. Don't try to fix under the chin or around the eyes in the global changes, you'll drive yourself crazy.

Use the white slider to pull back that dress so it doesn't blow out. I probably wouldn't change the exposure overall much (maybe drop if a bit) and focus more on less global changes.

Once you've got the image more or less cleaned up, then use the exposure brush or the radial fill to capture the problem areas and create a mask for them -- you can then do further local adjustments to those specific spots to try to lighten them up.

You are going to need to run noise reduction on it once you finish bringing up the shadows. That's going to soften the image somewhat, but you'll have to play with sharpening and noise reduction to find the right compromise.

Not the answer you're looking for? Browse other questions tagged lightroom post-processing photoshop shadows or ask your own question.