I know when for example camera is on f2.8 it means an area in front and back of the place that focus is, will be in focus and areas closer or farther will be out of focus, but if it is for example f22.0 then that area in focus will be much larger. What I can't understand is that is there a mathematical way of calculating how many meters is in focus depending on f number and the lens ( for example 35mm, 24mm, etc) ? For example last night I was about one meter away from a dancer who was also one meter away from the trumpet player and on a f2.8 24-70mm lens I wanted to be able to set it in a way that the dancer is in focus and the trumpet player behind her is in bokeh. How should I have approached this?

There's only one plane of focus. Things further away or closer to the camera are out of focus.

However, objects close to that plane of focus are not as blurry as objects far away from it. What you can do is to define a threshold of blurriness for yourself and thus derive an area around the plane of focus to be acceptable for you as "close enough to being in focus".

Even with the formula, you still need to figure out what your threshold is, calculate the result and apply it. It's not practical to know the formula.

What is practical however are the parameters of the formula, which leads to the question of "how to maximize background blur for subject separation in the foreground".

Take a look at this question with excellent answers: What exactly determines depth of field?

The aperture advantage of the primes allows you to use shorter shutter speeds, which in turn freeze the motion better. It depends on the light situation, how far you can push your iso and how fast the movement is, but it can be helpful to get a few more stops of light that you can invest in shorter shutter speeds.

On the other hand, a slow shutter speed with a 2nd curtain flash can do wonders to an image containing motion. But that's a different story.

How can I know how many meters is in focus area?

In the days when cameras and lenses had manual controls, lenses used to have a handy guide to depth of focus ... 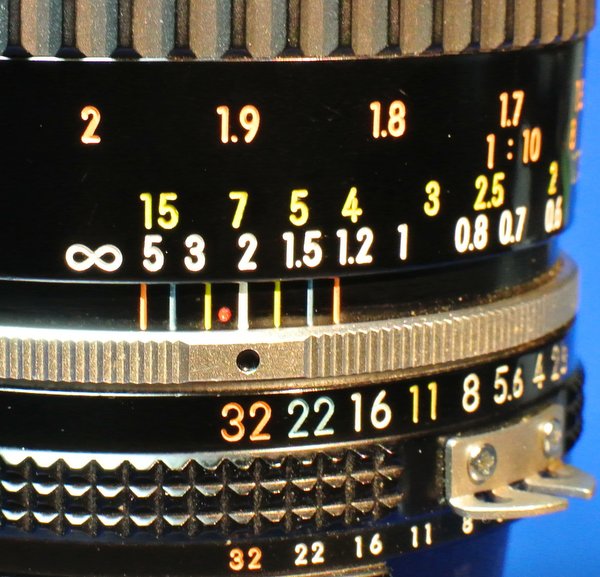 Most cameras display a viewfinder (or LCD) image of the scene at the maximum aperture so that what you are viewing is bright. Some SLR and DSLR bodies had a stop-down preview, this let you see exactly what was in focus (though probably very dimly if at f32).

is there a mathematical way of calculating how many meters is in focus?

There must be, but it may not be something you can calculate easily in your head without resorting to pen and paper, calculators or apps on a phone/tablet/etc. Having a facility built into the camera (see above) is what I would prefer.

How should I have approached this?

I couldn't say. I would have used aperture priority and taken a few test shots.

Not the answer you're looking for? Browse other questions tagged aperture metering bokeh or ask your own question.

68
What exactly determines depth of field?

36
How can I take shallow depth of field photos with a point-and-shoot camera?
6
Is depth of field and bokeh influenced by distance to the subject?
15
Will a dSLR and compact camera produce the same bokeh output at f/2.0?
5
How do dedicated light meters account for light transmittance?
1
Correct aperture to manage precisely blur and focus zones
2
Is 24mm F/1.8 Prime lens blur bokeh is good (not distorted face) for portraits
2
I have a Fujifilm HS25 EXR and its minimun aperture is F2.8. Is there a way of getting a lower aperture for my camera?
2
Can changing metering mode change focus?
1
Does in-camera metering affect anything but the meter in manual mode?
1
Why do we use smaller apertures, such as f8, for landscape photography?