If you agree that rules of composition can be broken, could you please list some of the photograph references from “famous photographers” and explain where and how the rules are broken?

There are no "rules" so nothing to break. Nobody is going to take away your camera, levy a fine, or throw you in jail, regardless of how you compose a scene.

There are some suggestions or maybe guidelines, but these are perceptual principles dumbed down that produce OK results most of the time. The point of them is reduce bad pictures by bad photographers, not to make good pictures.

For example, when you are taking a head and shoulders shot of a person, you generally want to use vertical orientation and put the top of the head near the top of the picture. This is to counter the knee-jerk reaction of most inexperienced people, which is to point the camera at the nose and never even consider rotating it. That doesn't mean there can't be cases where that actually makes a good picture, but that most of the time it won't. So newbies are told do it this way. When they get enough experience hopefully they'll realize there is no such rule and use their own creative judgement each picture without using these so-called rules as crutches.

Here's an example, which happens to be the featured photo on the site right now: 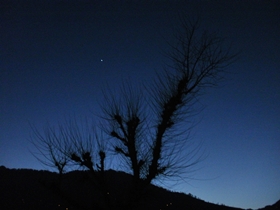 The land is closer to the 1/5 mark than 1/3, and the largest shrub is dead center in the photograph. It's still nice, though.

Again, it doesn't mean that there aren't cases where putting the horizon in the middle won't result in a good photograph. But, by the time you're ready for that, you'll have gotten past these crutches and will evaluate the framing of the picture for that scene on its own merit anyway.

As such, "breaking the rules" means composing in such a way that other effects/emotions are instilled in the viewer than an adherence to the rules would produce.

Eg. a bicycle needs space to "drive into" - the viewer does not feel comfortable if the bike seems to crash into the side of the picture. So if you want to rattle your viewers, you'll do exactly that. 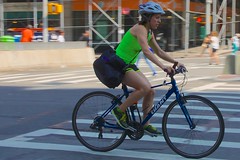 I wouldn't even call that "breaking" the rules, but just "using" them.

Knowing the rules then is simply important because we want to know how our pictures affect the viewers before we press the shutter button.

It's ok to break a rule of composition when you know why you're breaking the rule.

Consider the likelihood that you can't possibly follow all the rules on the same photo. For example, the rule of thirds probably conflicts with the rule of symmetry most of the time, or it might impact your ability to use leading lines, and so on.

Inasmuch as rules of composition are intended to help teach great composition, I think you'll also find that their importance as discrete "rules" falls away as the act of composition becomes more natural, as well.