What does f-stop mean?

What does f-stop mean? Is it the same thing when people say "2 stops" for example?

An f-stop is kind of a combination of two terms. First off, f/N is generally the notation used to indicate the size of the diaphragm opening, or aperture, in a camera. Let me give a little detail about how that notation came about, before I go on to explain the meaning of a stop.

If we open the aperture up to its maximum of, say, 1.4, we can measure that as well:

The difference between an aperture of f/2.8 and an aperture of f/1.4 is a difference of four times as much light...or two stops. We know this because the area of the aperture opening itself is four times as large at f/1.4 (1001.54 mm2) as it is at f/2.8 (250.25 mm2). A stop in photography nomenclature means a difference of one exposure value, which is the doubling, or halving, of the amount of light reaching the sensor. There are a few standard "full stops" that f-numbers are rated in:

These aperture settings all differ by one full exposure value, or one full "stop", and create the full f-stop scale. When you close down your 50mm f/1.4 lens from its maximum aperture of f/1.4 to an aperture of f/2.8, you are "stopping down" by two full stops.

An important relationship exists between aperture and shutter speed. Both are rated in stops. While aperture differences are often denoted in 'f/stops', shutter speed changes are usually simply called 'stops', or possibly exposure values.

Back to our example with the 50mm lens. Assuming we are shooting on a bright sunny day, with an ISO of 100. We have the aperture set to f/16, and the shutter speed set to 1/100th. (This is called the "Sunny 16" setting, as photographic theory indicates that an f/16 aperture, with a shutter speed matching the ISO speed, will produce a proper exposure in bright midday sunlight.)

Assuming we need to shoot something that is moving very fast, and we need a higher shutter speed. We can easily calculate the proper aperture value, assuming we know how many stops of additional shutter speed we need. If we increase our shutter speed to 1/200th, that is a difference of one whole stop. Shutter speed and aperture are inverses of each other, so if we increase shutter speed by one stop, we must open the aperture by one f/stop, to f/11. Despite the difference from the original settings, the new settings will produce the same exposure. The same applies if you are using a half- or third-stop scale...any half or third stop adjustment of one setting requires an similar inverse adjustment of the other.

An f-stop is a mechanism for setting the aperture of the lens, or how wide it is opening to let in the light.

There's two parts to it: f and stop. First, the maths.

Now that you know how f-stops relate to aperture and the amount of light reaching the sensor, you can use the term "stops" as a general term to refer to a doubling or halving of light for any reason.

For example, you may refer to quadrupling the ISO setting as "increasing the ISO by 2 stops".

The "f-stop" is the figure for measuring the aperture, and is measured as a ratio of the focal length (that's the "f"). 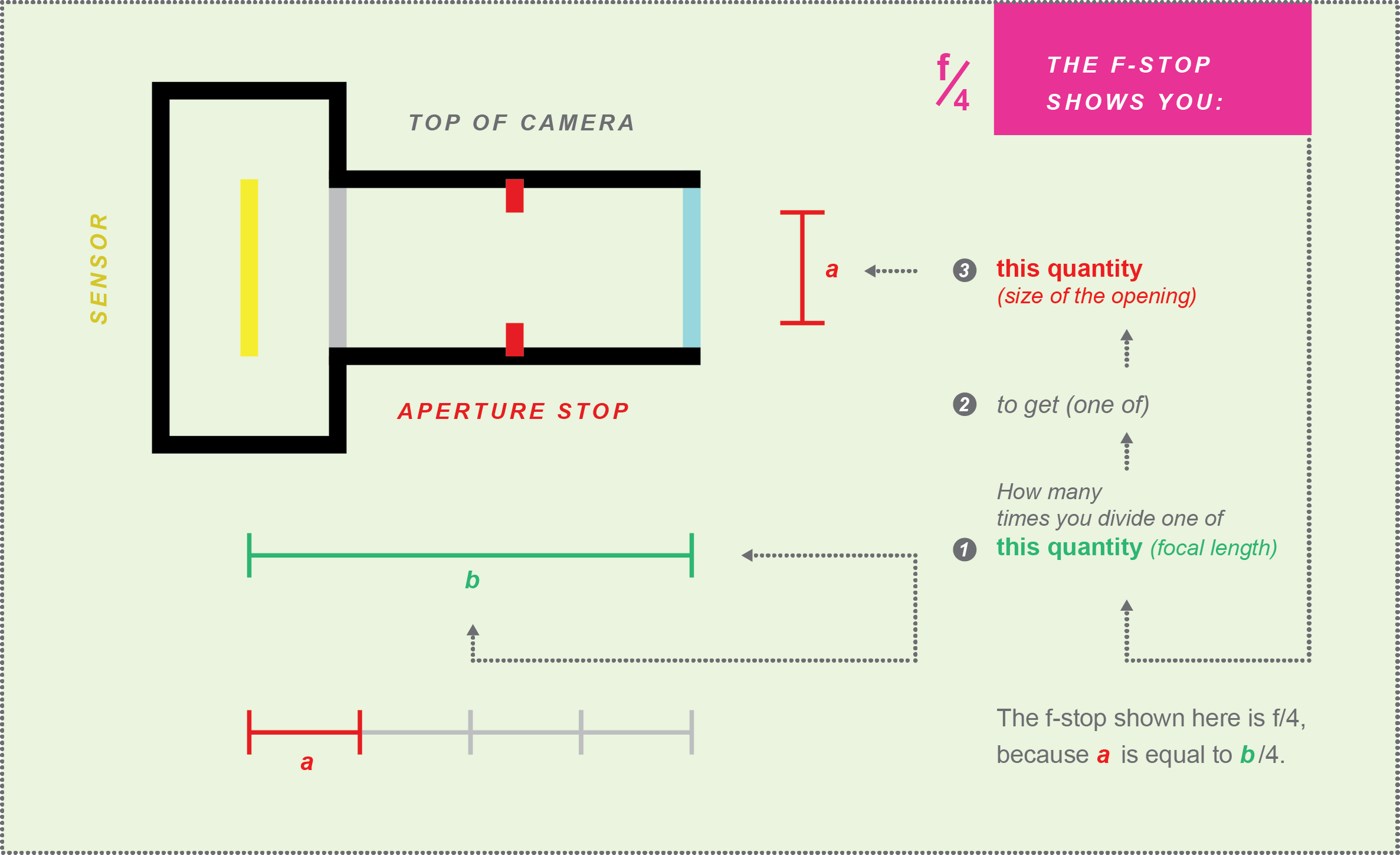 Why not use millimeters to measure the aperture size? Why do we even bother with this system?

Let's say we used millimeters to measure the aperture instead. You compose your shot, meter your scene and choose your settings. If you decide to zoom in, changing the focal length (and the opening stays the same fixed size)...the quantity of light hitting your sensor will change, so now you have to change settings again. If we use f-stops, we can zoom in (change the focal length) without changing the quantity of light hitting the sensor.

The link above basically says that each time you walk your sensor one step farther away from the light, the quantity of light hitting the sensor decreases by a greater amount each time (instead of decreasing by the same amount for each step). In other words, light intensity at a given location (the location of the camera's sensor) follows an inverse square law (it is equal to one divided by [the distance between that location and the light squared]).

Not the answer you're looking for? Browse other questions tagged aperture terminology camera-basics f-stop or ask your own question.

2
Why do lower f-stop numbers mean larger apertures?
-1
What F means in lenses and how to find focus distance
57
What is aperture, and how does it affect my photographs?
34
What is one "stop"?
32
What is T-number / T-stop?
25
What is a "fast" lens?
6
Why do camera manufacturers stick with the same awkward control layout imposed by film cameras?
14
What does the f-stop printed on the lens refer to?
14
What is the meaning of "stopped down"?
6
What reduces blur from camera movement more: large aperture or image stabilisation?
See more linked questions

14
What does the f-stop printed on the lens refer to?
6
What's the base f-stop when counting an ideal f-stop for lens?
34
What is one "stop"?
32
What is T-number / T-stop?
9
What does "workflow" mean?
0
How is f-stop a measure of dynamic range?
2
Flash guide number f/stop calculation
18
Do f-stop and exposure time perfectly cancel?
6
What does "OEM" mean in the context of camera equipment?