What is the easiest way to preserve old glass plate negatives?

I'm visiting my folks in France and our new 80 years old neighbor mentioned today that she has a nice collection of glass plate negatives dating back 1875. I can only assume this is what the Collodion photographic process is all about. I've scanned vintage film photos in the past to save family memories, but I've never handled glass plate negs. I told my neighbor I would have a look at them and see if I could develop/scan the plates to archive them digitally. I've only a short amount of time to dedicate to this task, and an Epson 3490 flatbed scanner.

What would you recommend I do? I'll obviously start by carefully scanning the plates then invert/clean/post-process them on my laptop, but is there any tricks you might think about? A different approach maybe? Thanks.

Here is where I'm at on this problem, pretty close I would say, short of looking around for a professional negative scanner.

@Rafal first suggested I have a look at Alexey Alexeev's "Scanning Wet-Plate Collodion Ambrotype or Tintype Plate" on YouTube. It certainly looked promising. Alexey's photos are great by the way, check his work. He recommends leaving the scanner lid open in his video. I gave it a shot but didn't achieve anything usable (see below), most likely because his plates are collodion ambrotypes/tintypes, not negatives. I contacted him and he confirmed that statement. 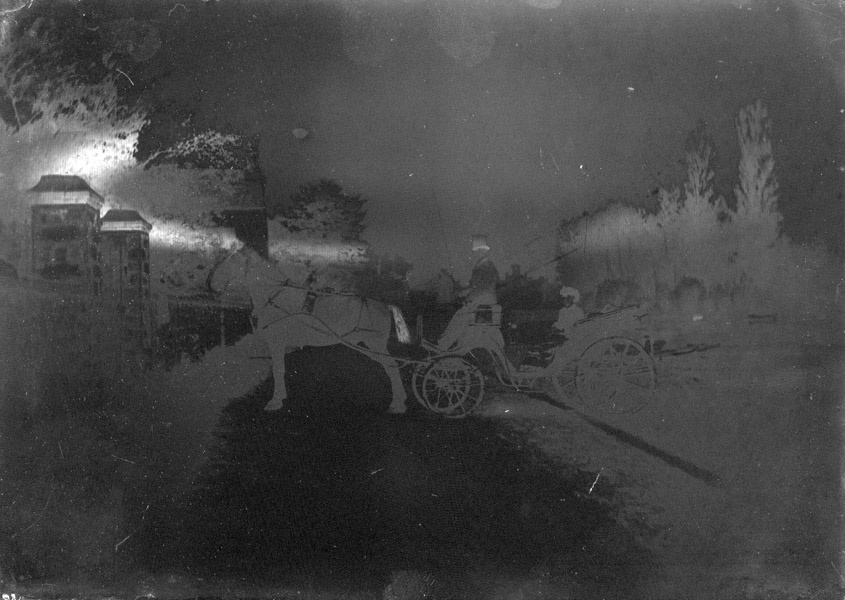 Next I tried closing the lid and scanned the negative plate that way, following the previously mentioned video to adjust the input and output levels. Here is what I obtained (below), without any cleaning involved. I was not convinced that's what I should expect though. Alexey confirmed this was not quite right, most likely because light was bouncing off the cover and the glass plate. 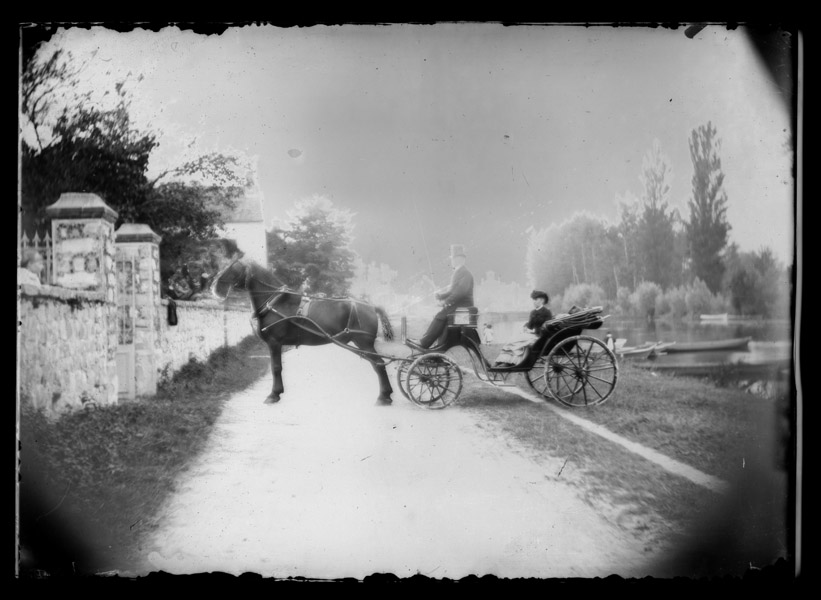 Camera on a tripod, shooting down at a lightbox

Finally my father and I built some kind of lightbox out of a small wine box, a light bulb, some cardboard, and Plexiglas. It's really just a fancy shoe box with one side replaced with a sheet of Plexi :) I used some tracing paper to provide diffusion and placed the negative plate on the box, the light shining from below. I'll post a picture of the contraption later. I setup my tripod on top of the box and my Canon 5D Mark II shooting down at the plate. I turned off all the lights and took a few pics at different parameters. I got the best result at f/8, 1/10th s. and ISO200. I used a 2 seconds timer and mirror lock-up to reduce vibrations. I opened the photo in Lightroom, inverted it using a preset, fixed the white-balance, adjusted the levels and removed a few dust spots.

I think that's as good as it will get for this little vacation project. The box is easy enough to build, especially if your father is retired. 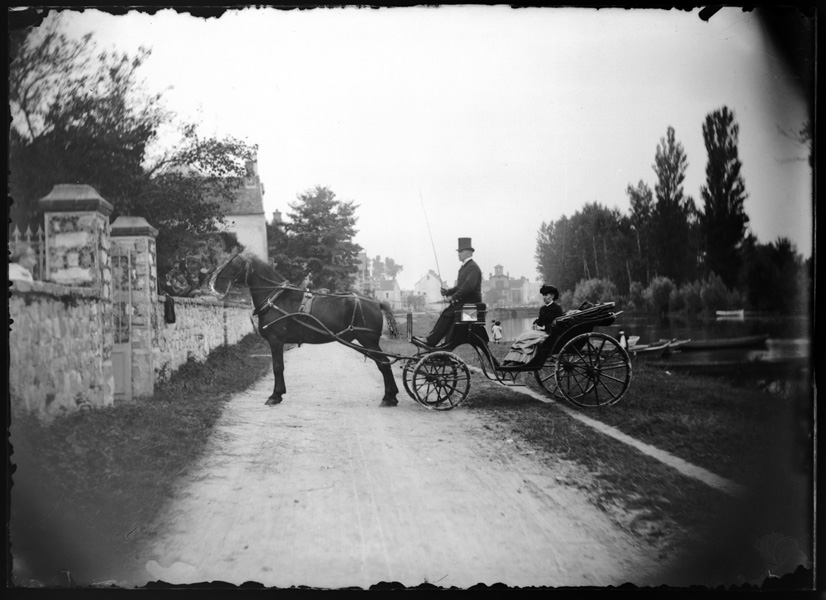 I can see problems with Newton's rings in your future. Give it a shot, but I don't think you'll find that the plates and your scanner glass are going to agree on what "flat" means. Short of using an oil interface (and I don't know if you can get hold of the kind of oil we used to use -- it had a index of refraction essentially the same as glass) your best bet would be to contact print the negs if you have a chance, then scan the prints.

I remember my father dealing with glass plate negatives. In fact we even coated glass plates and took photographs with those fabulous old cameras. But back to your query, I certainly cannot say which is the best method, but the method he used was simply to get into the dark room and either make a contact transfer or enlarge.

The contact transfer has the advantage of keeping the exact size specifications, while the enlargement probably gives you finer grain.

Down side of course is that you need to have a dark room, the whole kit, and fiddle to get the right tonal curve. So depending how many you want to do it could take a while.

You can then scan the paper version.

I've been looking at the same challenge. Some 2000 glass plate negatives from Edwardian times. 1/2 plates at 120mm x 160mm with some degradation of the emulsion. A lightbox and my D200 with portrait/macro 60mm lens would be optimal, but too time-consuming - I'd be doing it to 2020 and beyond.

I scan the image on a Epson V750, emulsion side down, at 2400dpi and save to jpg as B&W. I got best results with Epson's own (3.83) rather than Silverfast 8 Ai - I don't understand why. These are for printing and web use; they are not really interesting enough to archive TIFFs. The glass plates have a lot of contrast, the greys are dark to pitch black with hidden detail - like underexposed, and the skies look glaringly overexposed. I guess they did not have any AE settings in those days.

I take the scan into PS and invert/flip. I need to pull back the sky as best I can using PS levels to reduce the overexposed look. I then need to lighten up the dark areas using PS curves. I was hoping to find a preset for either lightroom or PS but no joy as yet.

I'm pleased with the result but disappointed that I cannot automate the process with a user preset filter.

Just doing the same thing with my grandparents Kodak slides from the 1950's. I have an Epson 4990 Pro Scanner with 3 programs, Epson Scan, VueScan Pro and SilverFast 8 Ai. I found the Epson gave the best scan, but not good enough using Dust filter or ICE. Silverfast was so dark I couldn't see the photo. So I went and bought a professional Lightbox, used my Canon G9 in macro mode and WOW what a difference. I am now going to use my old Canon 20D and with my Macro lenses, I will set it up on my tripod and photograph all my 4000 odd slides over a period of time. I spent quite a bit on the SilverFast software and no support. Tried HDR and it was worse.

Not the answer you're looking for? Browse other questions tagged developing negative glass-plate or ask your own question.

8
How to proceed after having developed the negatives?
11
What's the best way to develop old, exposed film?
4
What causes flat-looking negatives while developing film?
6
Could I do glass plate photography myself domestically?
2
How to reverse engineer digital color composite picture from glass negatives?
4
What process was used to make this glass plate?
3
What should I use to reassemble single 35mm film negatives into strips for scanning?
5
What can be done about sloppy cut negatives?
3
What do properly developed negatives look like?
2
What is the best way to store slides?