What is the correct, standard EXIF metadata to add for Rokinon 8mm fisheye lenses?

I own a Rokinon 8mm Ultra Wide Angle f/3.5 Fisheye Lens for Canon EF Mount. This is a manual lens not electrically connect to the Canon 60D body I use it with.

With exiftool I want to add the correct EXIF lens metadata to the resulting pictures.(*) From this SE questions I gather that this is not straight forward, so I have the question: For this lens what are the correct texts for the tags LensInfo and LensModel? Does maybe a website or database exist which lists standard strings for different manual lenses?(**)

And are there other EXIF text tags I should set in the photos as well? (I am thinking here of tags programs like Hugin might use to determine that the lens is a fisheye lens).

(*) It would be a bonus if Aperture and in future LightRoom pick the lens up by these tags.

If you want Hugin to auto-recognize and correct for the lens, then probably the right tag to use is Samyang 8mm f/3.5 Fish-Eye CS, because this is the entry in the lensfun database, which is now integrated into Hugin use. In the slr-samyang.xml file the entry is:

The lens is manufactured by Samyang in Korea, but is generic-branded with many many names: Rokinon, Vivitar, Falcon, Walimex, Bower, Opteka, Bell and Howell, Polar, Phoenix, and Pro-Optic are among the many names of Samyang. Weirdly, Vivitar calls it a 7mm, and Pro-Optic a 6.5mm, but they're all the same lens with the same stereographic mapping.

Also, there's an easier way than going to the command line to tag up lenses. I own a Rokinon 7.5mm f/3.5 fisheye for the micro four-thirds mount, as well as adapting several manual lenses for my Canons. I tag up the EXIF for all my manual lens and scanned film images in Lightroom with the LensTagger plugin. LensTagger is a GUI frontend for exiftool, which makes the job much easier than typing the command by hand on the command line every time. It can save "presets" of specific lenses you use often, and writes the following fields:

The Lens and LensModel fields can take any string, and will, indeed show up in Lightroom intelligibly. You don't need to worry about numeric coding in this case. When in Lightroom, you can set up the lens profile default for whatever tag you come up with. I tag my Rokinon 7.5 shots with "Rokinon 7.5mm f/3.5 UMC fisheye", and then set it to default to Stereographic remapping with kenw's Samyang 7.5 f/3.5 lens profile for lens correction. I'm sure there's a profile out there for the dSLR 8mm version. 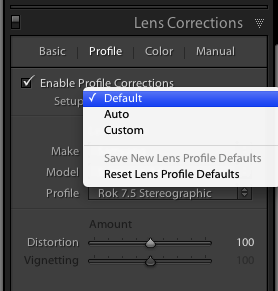 I want to add the correct EXIF lens metadata...

A lens not designed to communicate with the camera won't have EXIF data which would be deemed "correct" because the manufacturer didn't assign anything.

If there's a community of Rokinon users, you might ask around to see if there's a string people are using for your lens so any profiles you get from elsewhere have a fighting chance of working.

Whatever you add to your workflow that has data specific to that lens (e.g., a Lightroom lens profile) needs to use the same data you add to the EXIF for everything to work automagically. Consistency is the key.

Not the answer you're looking for? Browse other questions tagged metadata manual-focus fisheye exiftool samyang or ask your own question.

2
Why doesn't my camera produce usable EXIF data with a Samyang 8mm fisheye lens?
5
What is the proper exif tag to mark a lens as a fisheye?
0
Nikon lens with an adapter vs Canon lens on a Canon body - image quality difference?

5
What is the proper exif tag to mark a lens as a fisheye?
8
Is there a glossary of camera metadata terms?
0
How do I choose which low-cost fisheye lens is right for me?
4
Will the Rokinon 8mm f3.5 Fisheye work with a Canon camera?
3
Samyang 14mm or Rokinon 8mm fisheye? Which is better for landscapes?
3
Lightroom: how to insert Lens data to many photos at once?
4
Which EXIF tag to set for the 35mm equivalent focal length?
2
Why doesn't my camera produce usable EXIF data with a Samyang 8mm fisheye lens?
0
What differences are there between the Opteka 6.5mm and Rokinon 8mm fisheye for Nikon?
1
Which one is better for landscape on a Canon crop-sensor body: Rokinon 14mm/2.8 or Canon 10-18?