What is the color structure histogram and how does it work?

What is the color structure histogram and how does it work

A great answer to this question was posted on Quora by Kadir A. Peker:

Color structure histogram was proposed to alleviate the problem of the regular histogram that it reflects nothing of the spatial distribution of the colors in the image. That is, given a color histogram, the colors could be each lumped as blobs of colors, or they could be randomly distributed all over the image where each pixel is a different color; the color histogram will tell you nothing about this "structure".

The proposed histogram works as follows: You have a "structuring element", basically a kernel or a sliding window, that you slide over your image just like when filtering. At each position of the structuring element, you check whether color X appears in the window, and increment its bin value if it does. You do this for all colors in your histogram.

The effect of this process, i.e. using a window to count colors rather than counting them pixel by pixel is as follows: If a color is distributed all over the image, then each pixel of that color appears in a sliding window (many times actually, as the window slides over it) by itself. So, each single pixel contributes significantly. If, on the other hand, the color appears as a single blob in the image, then the pixels of that color count only as one in the bin when the sliding window is on top of them. So, in short, color structure histogram boosts the weight of a color in the histogram if that color is well distributed over the image rather than accumulated at a single location.

(FYI: Quora allows content to be reproduced on other sites, as long as you attribute the author properly)

There is also a good visualization of the scanning process in the following presentation: 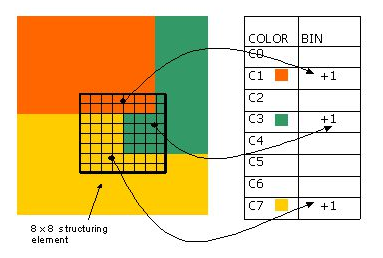 You can display a histogram showing the distribution of values from black to white, or see it broken into the three colors, both within higher-end camera viewfinders while viewing the subject or immediately after taking the photo, and also in many image manipulation tools, such as Adobe Photoshop or the free IrfanView. This allows you to make exposure decisions and to alter the image to spread out the histogram or to make the image high key (distribution concentrated at the high end, e.g. for a face) or low key (dark, as for a silhouetted figure in an alley).

Not the answer you're looking for? Browse other questions tagged image-processing histogram or ask your own question.

15
How do I interpret individual colors on RGB histogram?

120
How and why do you use an image histogram?
13
What does it mean if the main peak of my Histogram is beyond the top of the chart?
16
How does histogram shape affect the aesthetics of a picture?
15
How do I interpret individual colors on RGB histogram?
1
What does it mean when an RGB histogram and luminance histogram look similar?
2
How to use histogram adjustment when scanning?
13
Why does the histogram of an image depends on the software that opened it?
0
How to know correct exposure for RAW shooting when camera show JPEG Histogram
1
Nikon D500 bracketing wrong exposure preview and histogram