Could I have taken this landscape shot better with my P&S, or do I need a better camera?

Edit: Since coming back from Australia, I had my eye on a Sony a5100 for a while, and I bought it in the Amazon lightning deals. I have to say, the Sony takes much better pictures in terms of detail as well as colour, as I would have expected with a bigger sensor. It has done me very well.

So I recently came back from Australia, I took my Panasonic TZ40 P&S camera, supposedly one of the best all-round compact cameras.

I took quite a few photos at the Blue Mountains, and I compared them to 1 shot taken from a friend on a DSLR. I do not know if the DSLR image was post-processed or edited in anyway (except I've down sized both images).

I think it's pretty obvious which picture was taken by a DSLR. What I'm wondering is, could I have done anything to get a better shot? Or do I simply just need a better camera? I've been looking at a new camera, but I figured I should ask first.

Most of the other scenes turned out pretty well in my eyes. 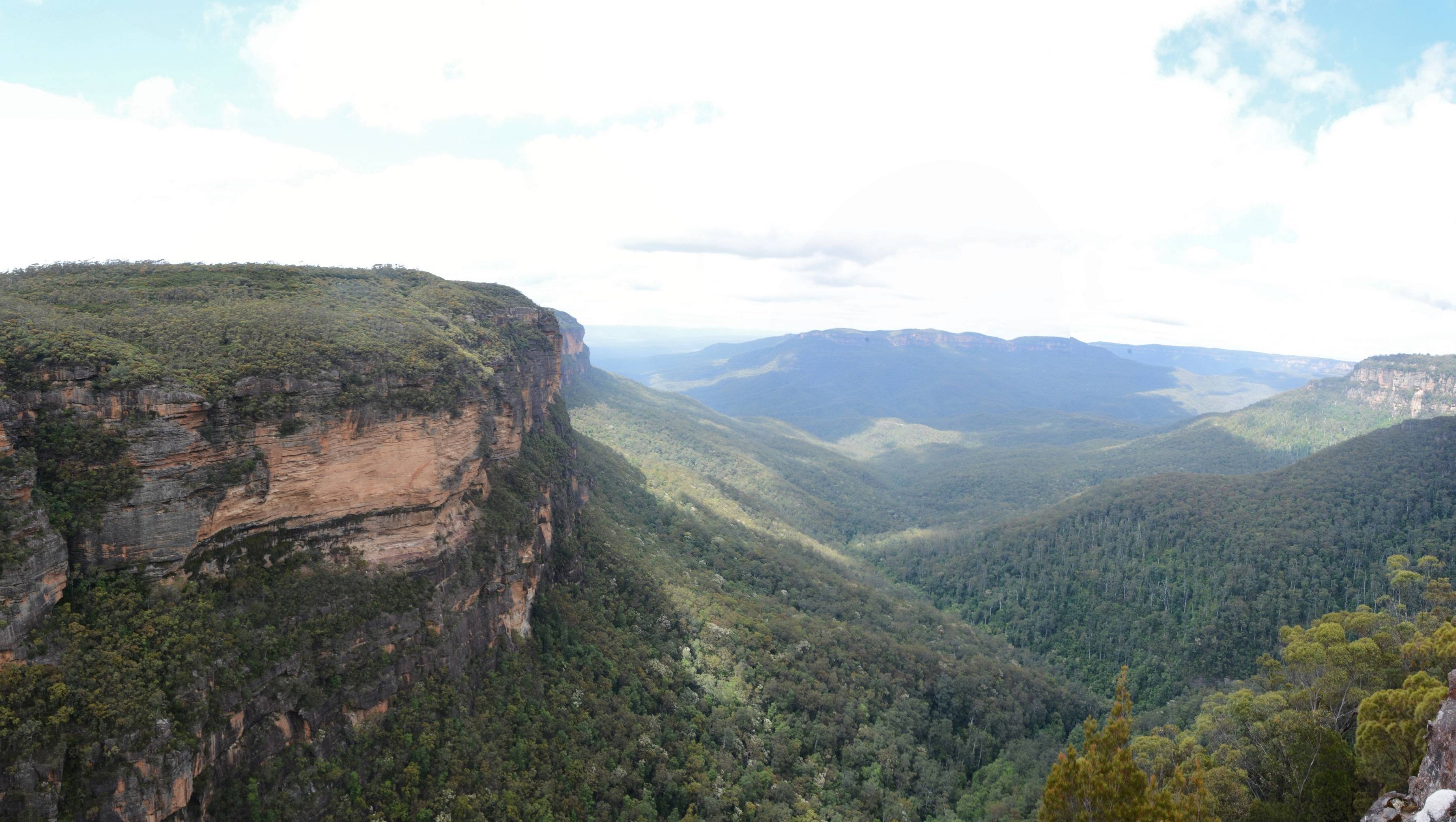 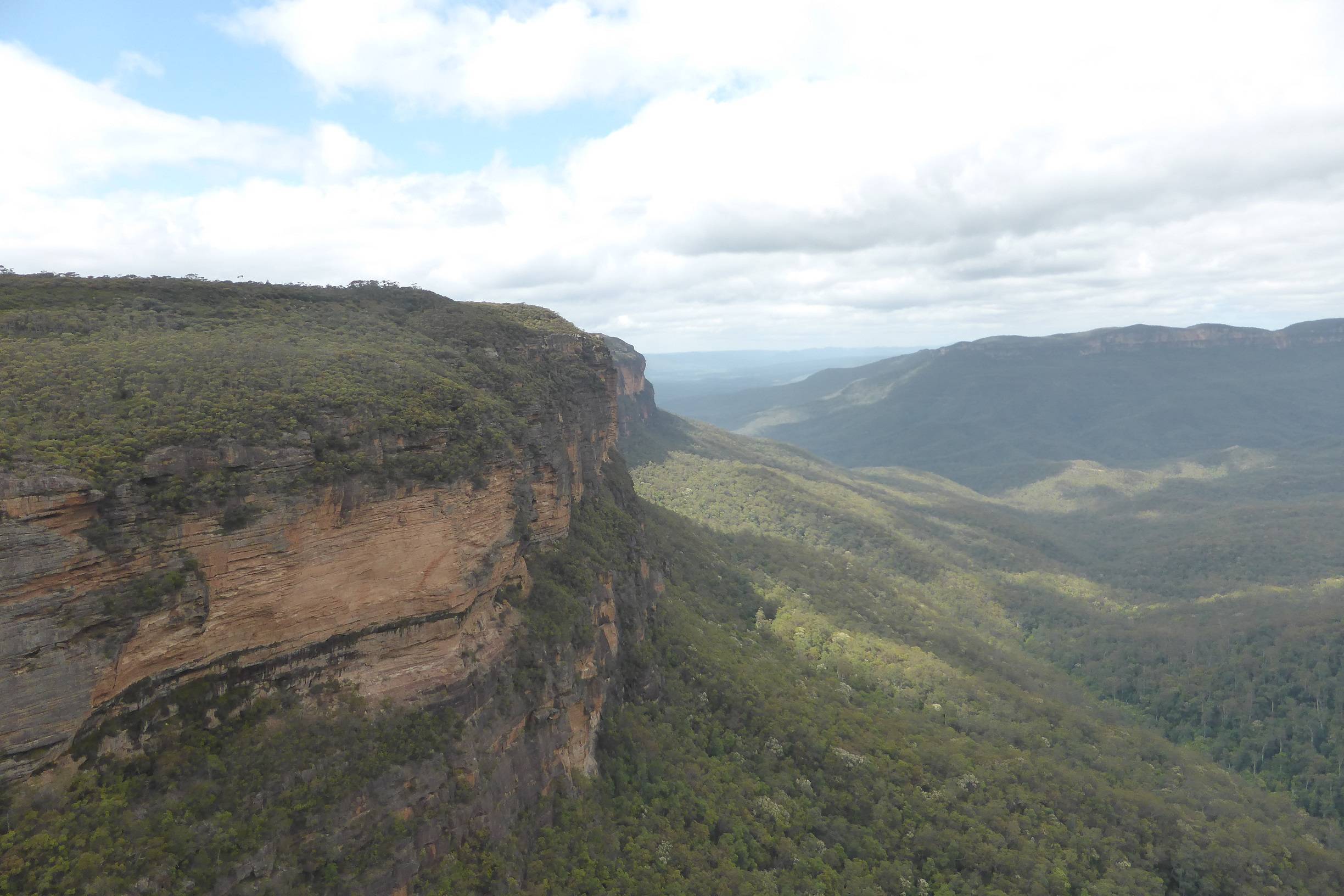 I gather from the aspect ratios (top one is 3:2, bottom one is 4:3), that the top image is the dSLR one, and the bottom image is the one from your TZ40. And at web sizes, while there's some improvement in image quality with the dSLR, it's not a huge amount better, and some could be compensated for with post-processing, rather than using straight-from-the-camera JPEGs. While your camera doesn't do RAW, that doesn't mean you can't make adjustments in post.

The main problems you have are slight overexposure (probably from the sky), and the fact that you're shooting a high dynamic range scene--that is, a scene where the range of values from white to black is larger than your camera's sensor can record. While a larger sensor can capture a larger dynamic range, it, too, will have difficulty with this kind of scene: notice how in both shots, detail has been "blown out" (overexposed) in the clouds. Having a dSLR would not necessarily have helped you here as much as technique.

Things you could have tried:

But probably learning to post-process is your best bet, and here, you may eventually want to move to a camera with RAW capability. However, I don't think a new camera is called for yet. Just more practice, knowledge, and gaining some post processing skills.

Like the other answerers have noted, it's not at all obvious which picture is taken with a DSLR — both have some pretty obvious issues, like blown highlights and poor contrast.

Rather than enumerating the problems, let me offer a few tips for you and your friend on shooting scenes like this:

Ps. I tried to see what I could get out of your photo, using nothing but Curves adjustments (and fixing the tilted horizon). Here's the result: 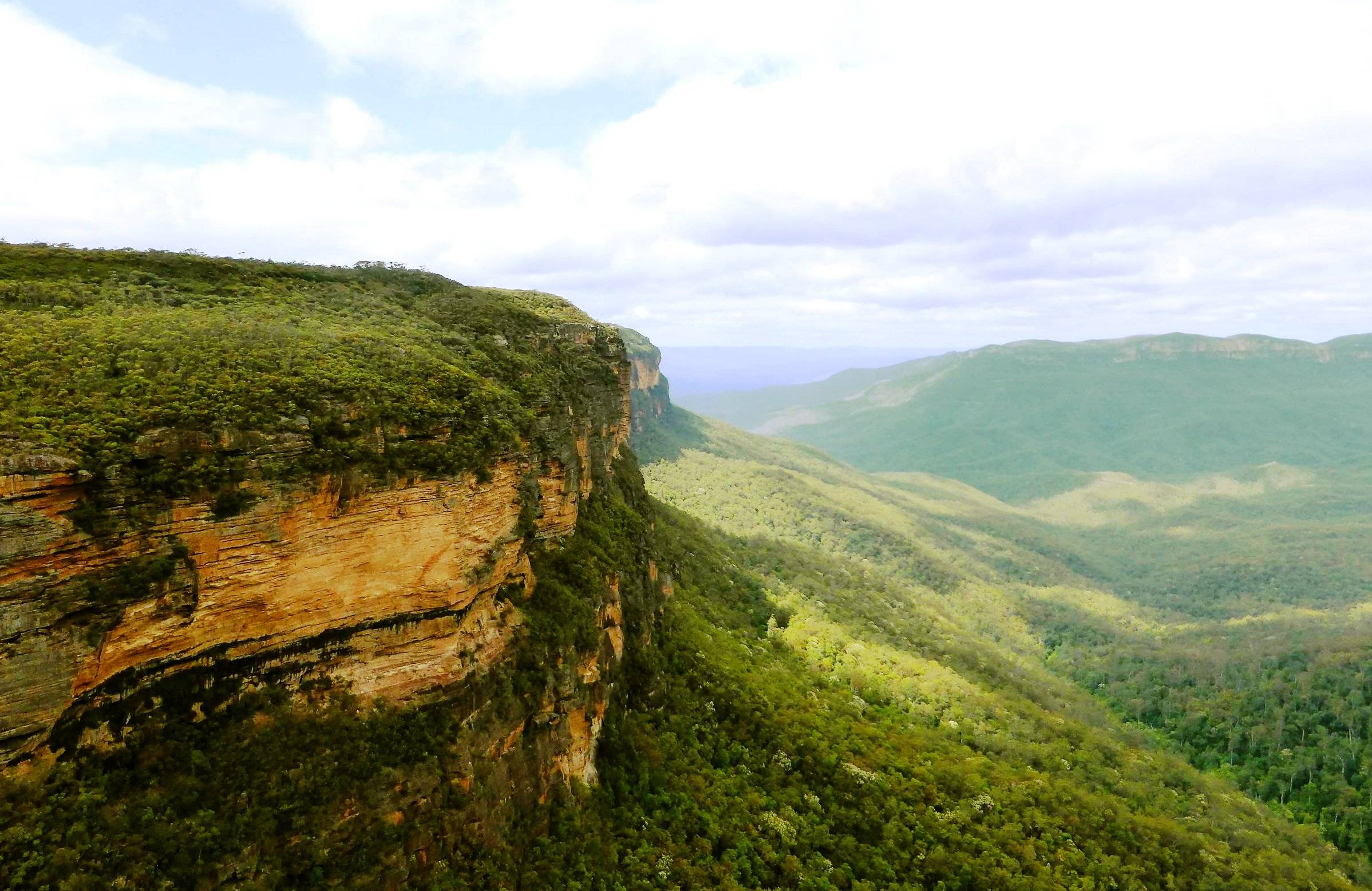 and screenshots of the the curves I used (for Value and Blue channels): 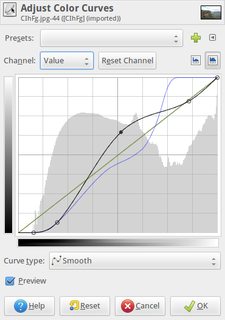 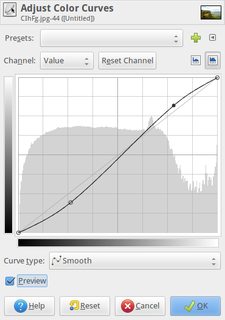 The first screenshot is the main adjustment, the second is a slight contrast boost I made after taking a second look at the result. I could've gone for even more dramatic results, but I tried to stick to something fairly close to the original. Notice how, in the second screenshot, the histogram looks a lot flatter; that's often (though not always) a sign of a successful curves adjustment.

I would've liked to darken the clouds a bit, to bring out some more detail there, but alas, there's simply nothing to be done there — most of those clouds are pure solid 100% white, and there's no magic that will pull detail out of that.

To be honest, I couldn't easily guess which is which when viewed at the default 600-pixel-wide size above. Both handle the dynamic range of the clouds pretty poorly, with the lower image being a little less bad. Looking more closely, the top image has significantly more detail in the trees â€” but still isn't astounding. (Both are subject to very high JPEG compression, probably due to the image upload service here, so a lot is lost there in any case.) The first image also has a lower black point, making it "pop" more â€” this is easily adjusted in the second image in any decent editing program with an "s curve", making it more like this: 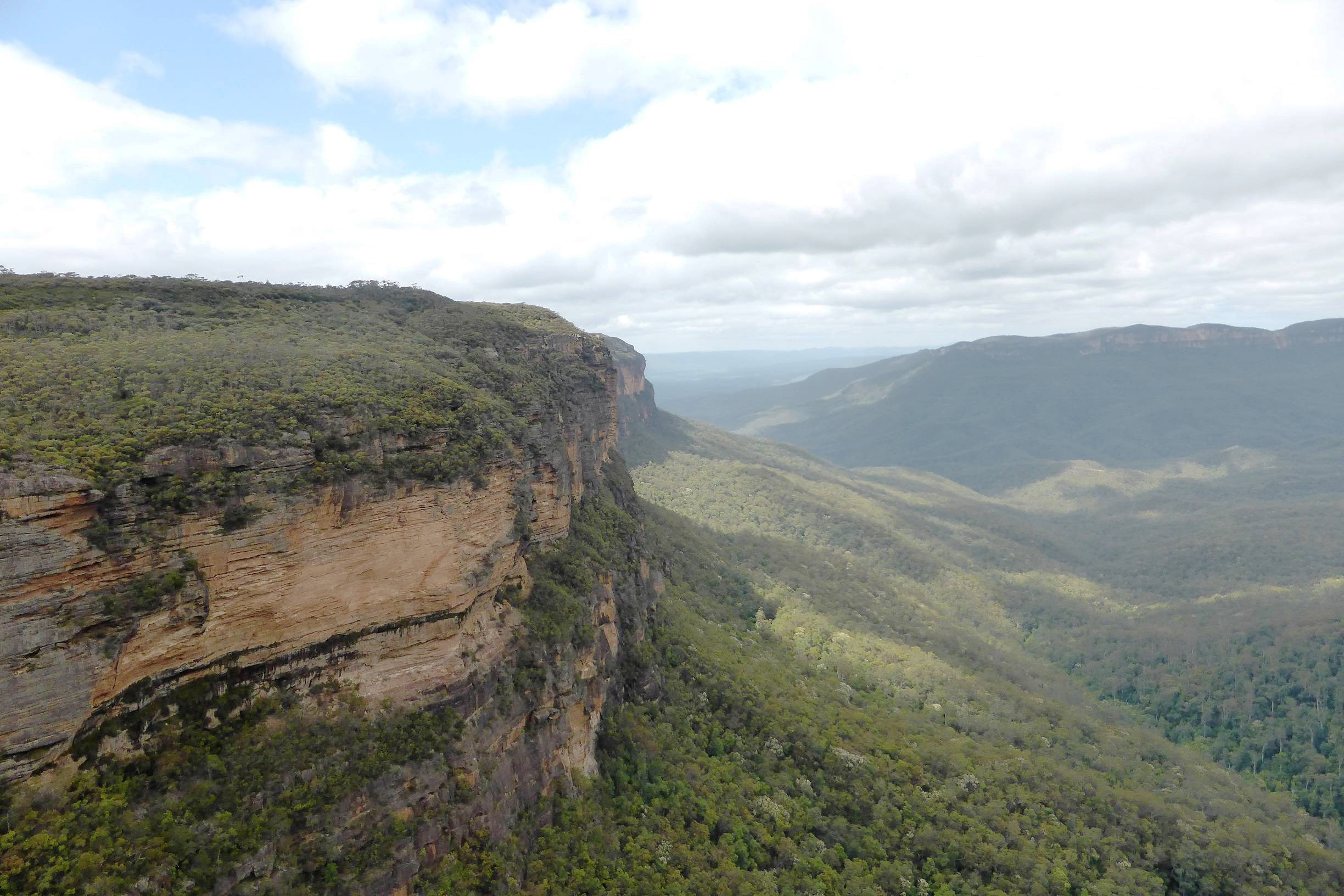 I don't mean to be negative, but, I don't think this really helps much. The cliff face looks more dramatic, but the sky is still blown out beyond repair. This is a really hard situation for any camera â€” the bright sky and cloud-shadowed valley don't match. And those trees on the ridgeline to the left â€” ouch. So, as with most landscape photography, the number one thing you could do with either camera is to learn the light of the area, and the weather, and come back when it's right.

Manual mode might have helped, but it's reasonable to assume that the scene mode picked pretty good settings here. Specifically, within the limits of the scene (again, basically impossible), the exposure looks correct, and the appropriate scene mode (on a P&S or on an entry-level DSLR) is going to pick a reasonable high aperture for depth of field, which is basically what you'd do manually too.

And you could milk more dynamic range from a single image with RAW, but fundamentally in-camera JPEG can be just fine â€” RAW is neither necessary nor a magic bullet. It just gives you more flexibility, and that can't always fix a photo that has a lot of technical problems to begin with.

Both of those images could easily have been taken by a modern smartphone. To get a better image regardless of format what needs to be done is control of the wide dynamic range in this scene. The sky is very bright and blown out in both images. The ground is much darker. Techniques like HDR, Exposure Fusion, and Graduated Neutral Density filters will all help in this area.

Of course a nicer camera will manual controls will help, but it is more important to learn the fundamental reasons why this scene is difficult to capture first; because spending money won't necessarily result in a better image. I would go so far as saying that spending money on a DSLR typically results in worse images for most users who don't know what they are doing with it. I'm not saying at all that you would be in that situation but it is very common I've found.

I'm going out on a limb and saying the DSLR is first. The most obvious difference is the difference in post processing. If your friend was shooting on RAW on the DSLR, it allows for far better adjustment of contrast in post.

Additionally, the larger sensor and better quality optics on the DSLR allowed for some additional sharpness for the trees and also resulted in a shallower depth of field which cause the background to become more blurry than the foreground.

So, ultimately it is a combination of factors between what the camera is optically capable of capturing and also how the image was post produced. Both images would likely have benefited by tripod stabilization as there seems to be some motion blur in both as well.

Such scenes need either to be bracketed (that is shot varying exposure), or exposed according to spotmeter - measure the brightest part where you want to keep details and add 3 stops to exposure. With landscapes, a graduated neutral density filter is very helpful. Polarizing filter may help sometimes too. And of course set your camera to record raw.

You have some excessive flare in the image, consider using a lens hood.

Not the answer you're looking for? Browse other questions tagged dslr exposure depth-of-field point-and-shoot manual-mode or ask your own question.

7
Loss of detail in high key areas?
12
How can I determine if my Sigma 10-20mm lens copy is appropriately sharp and focusing right?
4
Can you help me justify my desire to purchase the Nikkor 24-70mm f/2.8 even though I find it rather pricey?
6
How do I get a meter reading for a DSLR without a gray card?
10
How can I be more inconspicuous with a DSLR for Street Photography?
1
What could have caused this splotch to appear?
2
How to take a photo of a close-up object without focus stacking?
1
Does in-camera metering affect anything but the meter in manual mode?