What to look for in a scuba diving camera for a non-photographer?

My brother just got his scuba diving certification and I want to buy him a camera to use while diving (mostly for stills but also some video). He is not into photography at all so he's definitely not going to be using backlights or other accessories, or fussing with camera settings; he just wants something simple that he can use to take nice pictures of fish and coral.

I've heard that the GoPro takes blurry pictures underwater and that it's better for video than stills. I know less about the two Canons and I definitely don't know if the G16 is worth the price.

I'll address the one new question here that isn't already answered at this site, and the rest can really be answered by the following links:

Why do GoPro cameras perform poorly for underwater photography?

Specifically GoPro cameras since around 2010 with the HD HERO 960 have included underwater housings that are convex in shape. The domed lens creates an issue where the camera cannot focus properly while underwater. Because of this many third party options appeared in the market to create a flat lens in front of the standard housing.

Two years later, GoPro finally released a flat lens housing that is available as an addition to the Hero Models or alongside the newer models. This flat lens will allow the cameras to focus properly underwater and create very nice quality images and video.

Example of the GoPro curved lens that causes issues underwater: 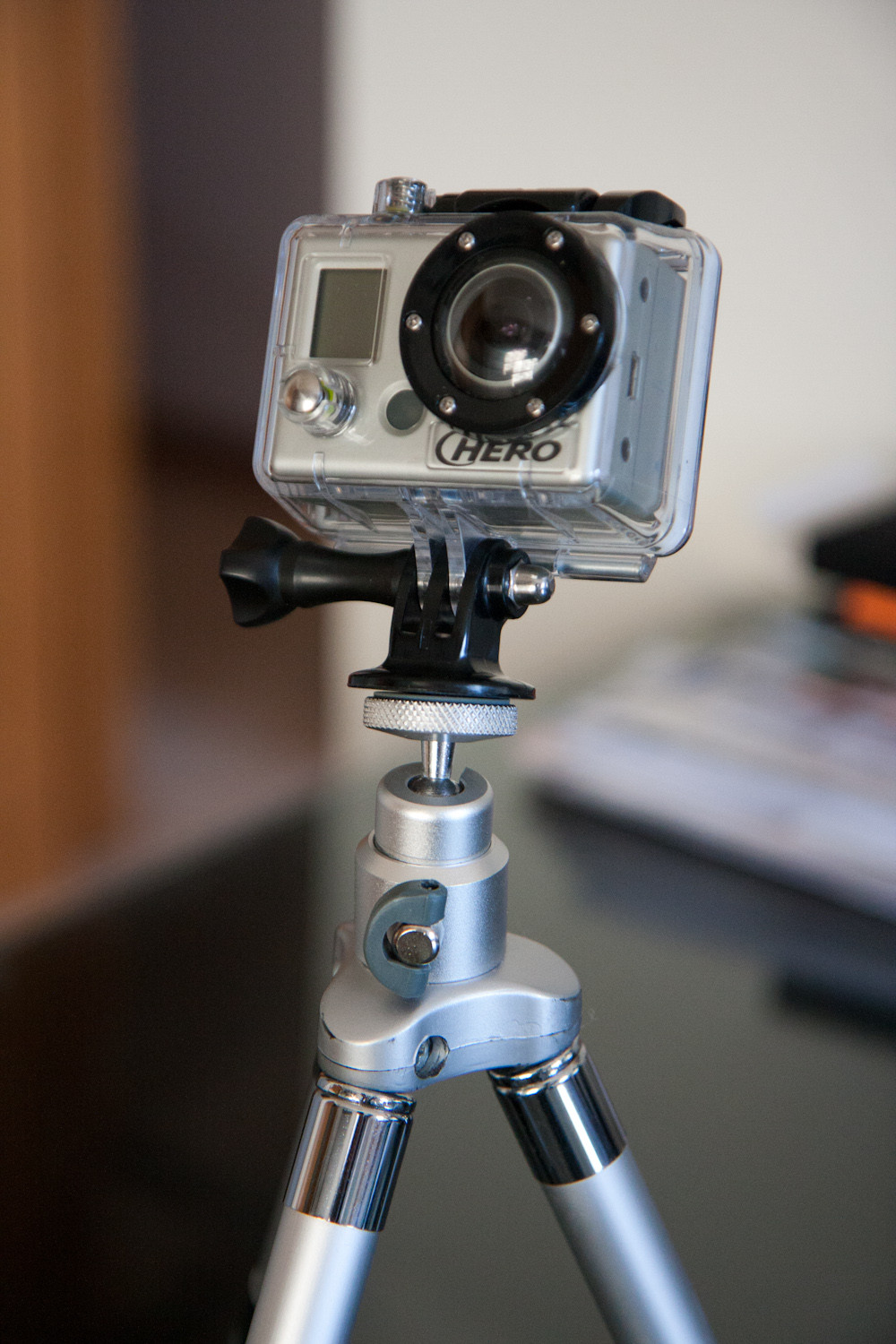 I have a GoPro Black. I never considered it a still camera at all. It would be difficult to use the button as a shutter release, and you can't see how you are aiming it! The GoPro gets turned on when you start, and stays mounted on your head or chest or whatnot; you don't fiddle with it or pay any attention to it while doing your activity.

However, a GoPro would be nice to have. Used in that manner: you can find strap mounts a lot cheaper than the ones they sell, so much so that I bought a head and chest set figuring I could mod them or use for parts, to strap it however I want. On Kauaʻi they are advertised heavily.

Since he's not a photographer, and it's best not to distract the novice diver with more stuff to fiddle with, the "turn on and forget" thing sounds like a good fit.

Include the waterproof housing, memory chip, and strap mounts, so he'll be ready to go. Set it for 2.5K (or 4K in the newer ones) resolution, and in post you can crop out a high-def section that's composed and stabilied (with niche software that is appearing, or a careful hand in a normal NLE). But that's a conversation for the video stack exchange.

(I wish I had something like that when drift diving in Arrecifes de Cozumel National Park! I'd say get that, and share a link when you upload the footage. :) )

Update: another comment makes me consider the low light. As a novice he really should be below the chop as it's difficult to keep position until you get more than 30 feet down. For shallower than that, use snorkell and stay at the surface! FWIW in sunlight I have no trouble seeing at the (plain) Scuba depth limit, or even inside a wreck. That's another advantage of video is the low-light performance. But check that when shopping! Waterproof to 120 feet is fine but can it still get a picture?

He may not thing he will want lighting now, but he will want it once he sees what photos and videos come out like without one. Even in clear, Caribbean waters, you get a heavy, heavy colorization to blue or green depending on the water. This takes effect as soon as you are more than a few meters down due to the fact that water filters some frequencies of light out more than others and the impact increases dramatically with depth.

Your options to deal with this are either removing other colors to compensate (either by way of special underwater camera white balances, such as found on SeaLife cameras, or filters over the lens), however, both these methods result in even further reducing the already limited light. The other option is to bring your own light, which is by far the recommended way to handle it. The good news is that you can use dive lights attached to the camera as a decent video light, but an underwater strobe is really ideal for stills.

I personally am not a huge fan of the GoPro for underwater applications as it isn't easy to control through the housing while underwater (in my opinion). It works great for an action cam (just capturing everything you see) but not quite as well for specific photos. I love the enclosure on my SeaLife DC1400, but it has some serious lag issues when taking photos (shoots nice video though). I don't have any experience with either of the Canon cameras.

when i started diving i wanted a go-pro but the price threw me off so i bought a knock off. I got the sj4000 i found it easy to use underwater with a good quality video and photo.So i would go with the go-pro or something similar because of the shear amount of accessories. the quality is great with the newer go-pros and the LCD screen is a must for things like this.

15
What is a good set of features to look for in a camera for kids?
17
What features are important in a good camera for an aspiring young photographer?
3
What underwater housing should I use with my Nikon D5100 for snorkling?
2
What camera qualities should one look for in a digital camera for family pictures?
3
Nikon non-VR 70-300 lens for entry-level bird photographer?
5
What should I look for in a ultra compact camera?
2
What housing should I get for the Canon 5D MkII?
4
Blue / Green Water Filters and Shooting RAW While SCUBA Diving
7
What Equipment Is Required For Split-Underwater Photography?
2
Are there non-floating underwater neck straps for underwater digital cameras?