Can I legally sell a photograph with a border made to look like an old Polaroid print?

I'm planning to do an exhibition in the near future where I want most of my work to be illustrated in the Polaroid photo format like the image bellow. 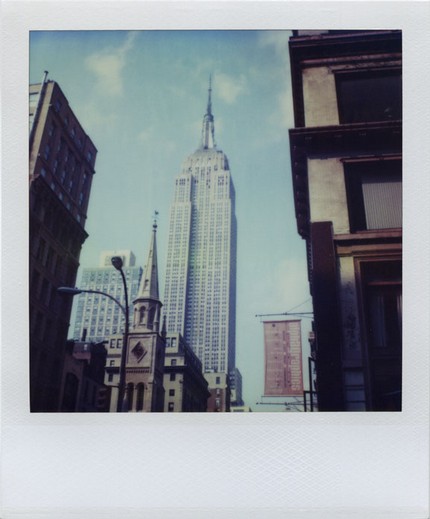 In this exhibition I may sell some work and someone asked me the question "Can you legally sell those photos since they represent the Polaroid trademark?"

I realized I don't know the answer. Can I sell and distribute this work with the exact dimensions as a Polaroid photo?

Polaroid applied for a design mark apparently covering the shape of their prints, but that application was abandoned in 2000. That shape is distinctive, but, for example, Fujifilm Instax looks similar — not to mention Impossible Project film, which is actually made in a former Polaroid factory.

You're not using the Polaroid name, which does have a valid trademark, currently held by a licensing company (since the original is defunct — all that remains is the intellectual property rights). That company also claims the "Polaroid Classic Border Logo" as an unregistered trademark — but as the other commercial examples show, that's not particularly strong. Generally, ™ covers "commercial misrepresentation of source or origins of goods" — if you are using this shape to imply that your photographs are made or licensed by the company with rights to the Polaroid name, then you might be in trouble. But, it doesn't seem that you are.

If you were selling actual prints made on Polaroid film, I don't think the question would come up — everyone understands that art made in some medium is made by the artist, not by the company that sells the medium itself. (Just as you can sell art made of Lego.) In this case, you're not doing that; you are just using a distinctive shape often associated with instant prints. If you're really worried, consult a lawyer, but in my lay opinion, I think you're well in the clear, because you're showing and selling your work, not a competing film product. As long as you don't do anything to imply sponsorship or endorsement, I wouldn't be concerned.

It's probably worth noting that this site's logo uses a similar shape. Of course, Stack Exchange isn't selling photographs or film -- but also, I've looked at that logo thousands of times, and never once did it even cross my mind to draw a connection with the Polaroid brand.

Do not mention the word "Polaroid" in print anywhere, do not use the company logo, and don't bother printing the black square on the back of the picture and you'll be fine.

How can a border surrounding a printed photograph can be protected by trademark law when there are endless variations of scale, proportions and design that are possible on such a border. If the width of one side of the border is changed does the trademark still apply? Many companies offer the “classic” border style you refer to as well as offering variations of this in terms of size, colour and design without any reference to Polaroid. Polaroid has gone bankrupt twice and its trademarks have been bought by private equity lawyers who have been accused of being trademark trolls. They don't make anything, they just licence the marks and send intimidating letters to artisans. Not what Polaroid's founder had in mind methinks.

Not the answer you're looking for? Browse other questions tagged legal selling polaroid or ask your own question.

14
Why do polaroid images look like they do?
7
Who owns the copyright of a picture taken of my construction work?
1
What am I legally entitled to do with a photograph I've purchased?
3
What can and cannot be legally done with editorial photos?
8
When do I need permission from my subjects to use my photographs?
1
How can I get a fade-to-white vignette with Polaroid film?
0
How can I create a vintage 1990s Polaroid look from my DSLR?
1
Can I sell a photo as a Limited Edition print if I have sold it as an open edition in the past?